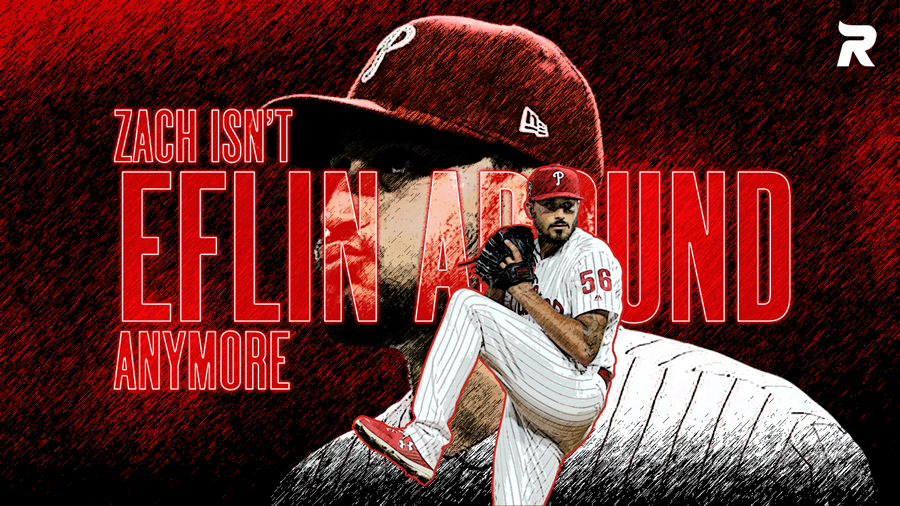 I benched Zach Eflin in my weekly leagues last week. There, I said it. Even us “analysts” can get it wrong from time to time. You think you have a beat on something and then a small round ball with randomly changed rules on stitching misses bats just the right way and then you are right back to knowing nothing. Just like Jon Snow. I admit I was scared of him facing the Dodgers, in his own house, knowing he wasn’t going to be able to blow them away. I thought it would spoil his 2 start week. There’s that forsaken word again, “knowing.” Quite the opposite happened.

That night in Citizens Bank Park was phil-nomenal. The Dodgers weren’t ready for it and probably no one, not even Zach himself knew what kind of fire he was bringing to the park. Eflin pitched 7 beautiful frames allowing only 4 Hits, 2 Runs, 2 BB, and a shiny 12 Ks. A new career-high. His previous best was 10 against Baltimore in 2020. This though was against a real team with World Series aspirations. So what got into him that night and what does that tell us about his season?

The first thing that’s different with Zach this year (and seemingly every year) is once again he’s tinkering with his pitch mix. For a couple of years now the 4-seamer has become little more than a memory in favor of the sinker and Eflin has featured more offspeed pitches. The largest spot of interest though is him nearly scrapping the slider in favor of his curveball and the invention of a cutter (at least that’s what statcast calls it). 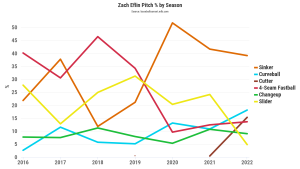 His “cutter” though, doesn’t exactly behave like a cutter now does it? It has almost no horizontal movement and far more vertical movement than the average one. It’s fair to say it’s more of a hard slider with drop. Eflin seems to have reinvented his slider and dials it up and down during his starts.

Looking at the spin-based movement clock we see that cutter has the gyro-spin of some sliders. That suggests that it’s still a slider but that he’s throwing it a bit harder with more late life. 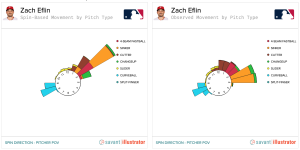 Though I’ve talked about the cutter, it’s a bit of misdirection, just like Zach Eflin. The “cutter” isn’t the real story here. Yes, he changed it, and yes he’s throwing it more. But that’s just his third most used pitch. The real weapon though has been his curveball which mirrors the spin pretty close to his sinker. He gets more sweep on curveball than others and a bit less drop so it moves away from the path of the cutter. Since he’s dialed up the curveball to his second most used pitch, and been locating it well, it’s become nearly unhittable. And at least in the short term, looks like he’s been a bit unlucky with his sinker/cutter balls-in-play too.

Eflin is getting everyone to whiff nearly 50% on his curveball! That’s absurd. Not only that but if they do make contact it is nearly always weak contact since they are likely hitting into the dirt with an average launch angle of -2, and that’s turning into an out almost 9 times out of 10 as opponents are currently only hitting .148 against it, which lines up well with expectations. Because Elfin is able to hide the fastball, and the sinker is also creating a lot of weaker contact, he seems to be following a similar path as Joe Musgrove in 2021 by relying on non-fastballs more than 60% of the time.

That worked out great for Joe last year until he came back down to earth some in the second half. When you rely this much on non-fastballs you have to locate your pitches well to avoid getting into fastball counts where you are forced to remove the mask. Musgrove wore down some in the second half and he began to have let-down games following his really dominant ones. Possibly stamina-related? Zach Eflin could be a mini Musgrove albeit with less-elite breaking pitches. Eflin has yet to pitch more than 165 innings in a season too, so I think you can capitalize on his good starts now while he can locate his pitches well, and then around the All-Star Break maybe look to trade him and avoid the late-season letdown unless he figures out how to get batters off his cutter more.

What is considered a hard thrower? What makes a guy a strikeout pitcher?

Clemens threw 92 and so does Kershaw.

I don’t know enough about him personally.

A hard thrower is dependent on the era, but in today’s game I’d consider a hard thrower someone whose FB avg is 95+

A strikeout pitcher is simply someone who gets a larger amount of their outs recorded via the strikeout compared to the field, I consider that to be around 30%+ or roughly 9+ k/9

I’m an Eflin fanboy. He was my breakout pick in terms of players going undrafted. Eflin is on a multi-year trend of elite walk rates, weak contact and just enough strikeouts to keep you interested. His ownership is still way too low, although his IL stint probably has something to do with it.

yes last 2 starts were acceptable, they were just still underwhelming with meeting expectations. hopefully a trending up

I’m hesitant only because I think we’ve seen curveball usage head fakes from Eflin before. He’s commented that he tests out his curveball feel in the bullpen before the game and his usage of it in the game depends on how that goes.

Absolutely, curve is a feel pitch. The difference is he added the “cutter” at the end of last year and has been committed to it this year so far. which is in turn, at least so far, has made him more comfortable with curve. Agree though, something to watch

Franmil for sure, early on his timing was an issue, haven’t dove in lately

Ok, cool. I traded for him earlier lol

Players can’t just loose it? Can they? I didn’t sell Merrifield or Story….they can always find something new or make adjustments , but they don’t just lose it…not in their 20’s….at least

talented players eventually adjust. less good players’ holes get found out and then they can’t adjust. Franmil seems to be former, he’s was missing things he usually doesn’t, so seems to be fixable.

Thanks for your post! I’m a bit worried that we might be extrapolating too much from Eflin’s 12K LAD game, much as we did Luzardo after his 12K game (in 2 fewer frames) against your beloved LAA. Even star studded lineups can have collective off-days …

In comments to Grey today, frequent commenter Ante Galic proposed that no team can win an RCL this season without having Aaron Judge on their roster. Someone in the Razzball brain trust (you? Matt Truss?) should explore this hypothesis in a post! If Judge stays healthy, I think the player most commonly held by top RCL teams will be Judge; he’s such an outlier and, barring injury, will likely continue to be one. As I don’t own Judge in any RCL, I know I am arguing against my own cause …

haha yeah. It is limited for sure, but the “cutter” is a new pitch he didn’t have until the last couple starts of last year. So its a new wrinkle with sinker that seems to be minimizing damage so far… we’ll see how it goes

Now who has Judge in our RCL… oh right, me!

Gee, I wonder what might have spurred me to ask you that question … ;-)

So, last time you did this it was with Lauer. That has worked out nicely. Thank you! The break down sold me. I am not so sold on this one and maybe you aren’t either. Talk to me about Eflin compared to Cobb compared to Berrios. It seems Eflin could be on the uptick. Blair still has Cobb as a 1. Everyone is bailing on Berrios(he’s 27).

I have Lodolo and Kirby locked up on a “Minor League” roster. Would you look to flip either for Berrios? What happened to 2018/2019?

So Cobb’s under the hood numbers look great, it seems like the other shoe has to drop at some point and he rattles off good starts (provided he’s healthy). Cobb’s pitches are a bit more “impressive” than Eflin’s. Berrios seems to be having an off-season so far, he had some less than stellar metrics last year but still performed well. But this year they look worse so far, and as of yet doesn’t seem to be looking any better. He could turn it around but haven’t seen it yet.

I’ve been banging the eflin drum since February although I didnt dive into why I thought he was going to semi breakout just a hunch. Thanks for this, I own him in an RCL and 1 16tm league. I too benched him vs LA but will be not benching him until he shats my ratios. Appreciate the work.

No problem, yeah I decided to start Eflin against the Mets this week come hell or high water. Buckle up, lol.