Finding great pitching is always always a chore during the fantasy season. If the pitchers on the waiver wire were sure things, they would have been added during your league’s offseason draft.

But this doesn’t mean finding a good pitcher is impossible. It just means you have to study the pitchers and make an informed decision about whether a certain pitcher is just hot or is a legit add and keeper.

Two players we will look at today are Eric Lauer of the Brewers and Matt Brash of the Mariners.

Who are Lauer and Brash?

Lauer was drafted twice, once out of high school by the Blue Jays in the 17th round of the 2013 draft and then with the 25th pick of the first round of the 2016 draft by San Diego.

Brash was drafted in the fourth round out of Niagara University by the San Diego Padres. In college, Brash put up nice, but not great numbers.

So, why are they still available?

Lauer was a pedestrian pitcher in his first major league three seasons, posting ERAs of 4.34, 4.45 and 6.37. But last season the lefty rebounded with a 3.19 ERA. Some fantasy owners are coming around on Lauer, at least in Yahoo leagues where he rostered on 66% of teams. However, he is only rostered in 49% of ESPN leagues.

Meanwhile, Brash is owned in only 30% of Yahoo leagues and 17.8% of ESPN leagues. While he is ranked as a Top 100 by several publications, the fact he didn’t dominate hitters in college and the minors has left doubt about him by fantasy owners.

Is that doubt about Brash correct? Is Lauer really for real?

It is easy to see the improvement, statistically, that Lauer has made since his rookie season in 2018 with San Diego. While his ERA increased a bit in 2019, his WHIP and BB/9 went down while he increased his strikeout. That improvement led the Brewers to trade for Lauer and Luis Urias for Zach Davies and Trent Grisham.

The trade did not look good for the Brewers in 2020 as Lauer was horrible on the mound thanks to a tear in Lauer’s shoulder capsule and then being shut down again during the season after having to quarantine due to being in close contact with someone who tested positive for COVID-19.

As the 2021 season started, Lauer was fully healthy and he had a turnaround year for Milwaukee, posting career-best marks in ERA, WHIP, SO/9 and strikeout to walk ratio. His 3.1 BB/9 tied his career-best mark. This season is starting even better for the left-hander. In his first three starts, he had a 2.20 ERA and 1.04 WHIP with 23 walks and only four walks in 16.1 innings of work.

Coolwhip had a great article on him back in April detailing the uptick in velocity and movement in Lauer’s pitches. Just look at the break on this curve while striking out Alcides Escobar. But velocity and movement aren’t the only reason for Lauer becoming one of the top pitchers in the league this past month.

Pitch selection is also a key. Look at the image below and you can see how Lauer has relied less and less on his fastball and more on his breaking pitches. What Lauer has learned is how to pitch and not just throw, and it is a skill nearly every young hurler learns in order to become a top pitcher. 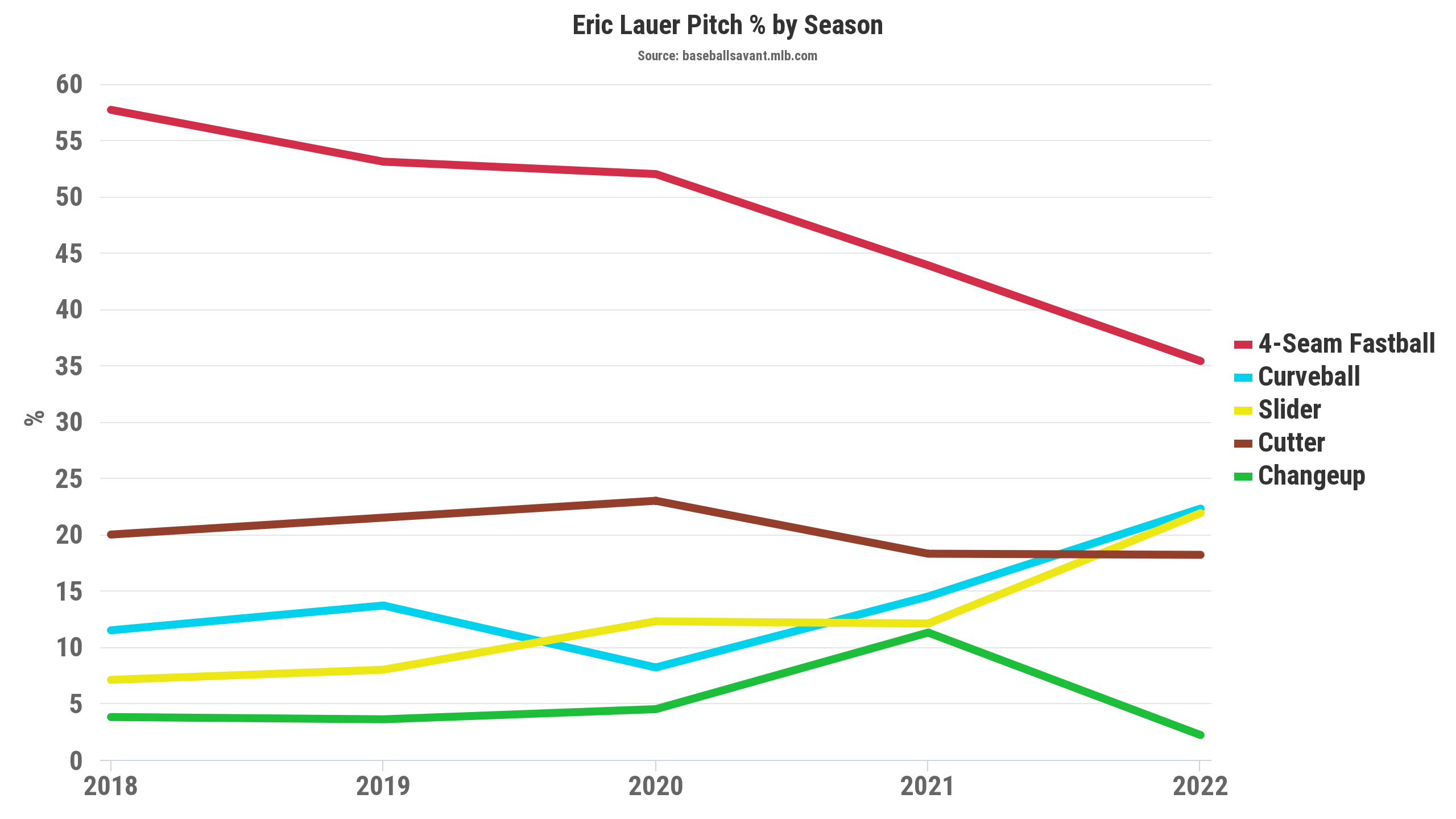 Lauer has also cut down on throwing his cutter and his changeup, especially after throwing it 11.3% of the time last season compared to 2.2% now.

Entering the season, Baseball America ranked Brash as the 45th best prospect while MLB Pipeline had him ranked 98th. Brash showed why he is considered a top prospect during spring training. In 9.1 innings of work, he allowed only three hits and two walks while striking out 12 and posting a 0.96 ERA and 0.536 WHIP.

The rookie for the Mariners broke camp with the team and is now thrilling baseball fans in Seattle. His fastball velocity ranks in the 85th percentile in the majors and his spin rate on his curve ranks in the 95th percentile. He features a 4-seam fastball that averages 95.9 mph, a slider at 84.4 mph, a curve at 82.6 mph, and a changeup that averages 85.5 mph. And then there is this…

His Stuff is Nasty!

Just look at this chart to see how much movement he gets.

Basically, it is just not fun facing him.

The inability to command his pitches allows for many to be hit hard and has run up his pitch count. He has yet to go a full six innings in his first three outings. Major league hitters have proven they can hit a 100 mph fastball, so when Brash misses his spots, hitters have been able to take advantage.

What does all this information about Lauer mean? It means you should be adding Lauer ASAP.

He has increased his spin rate and velocity, making his fastball ride higher in the strike zone than in the past and creating more swings and misses. His breaking pitches are coming from the same arm slot as well, making those pitches look like fastballs before dropping or sliding out of the zone.

Lauer will certainly have some bad days on the mound, but I think he is now a complete pitcher and makes a solid player to have in your fantasy rotation.

As for Brash, he is a work in progress but he has shown he has the ability to succeed on this level. If your league limits the amount of keepers you have, then adding him is not a sure thing. I am always hesitant to add rookie pitchers because of the learning curve most have to go through (just look at Lauer).

If you have 40-man rosters and/or can live with the ups and downs (like Friday’s start vs. Miami) that Brash will certainly have, then add him. In one or two years he can be a solid No. 2 starter.

A wood for brash?

That is a little tougher without knowing your end goal? If you are in a win-now frame of mind, I may keep Wood. You at least know what to expect.

If you are able to ride the ups and downs that will come with Brash or able to just sit him on your roster, then I take Brash. He has a lot more upside.

Thanks for the article! Decided to dump A. Wood for Lauer. Trade off with Ws, but given injury history with Wood seemed like the right move. Do you agree?

First, thanks for reading.

To answer your question, I think it was the right move, and I don’t think you lose wins. Milwaukee is going to rack up a lot of Ws in the Central.