Welcome back to another week of Top Dynasty Keepers.

The regular season will soon be coming to and end, which means the major league debuts of two of the games top prospects will also be coming to an end.

This week we are going to take a look at Riley Greene of the Detroit Tigers and Triston Casas of the Boston Red Sox.

Both players entered the season as two of the top prospects in the game. Riley was a consensus Top 10 prospect, entering the season ranked fourth by Baseball America, fifth by MLB.com and sixth by Baseball Prospectus.

Greene was one of the top hitting prospects in the 2019 draft and has remained so since becoming a professional.

Meanwhile, Casas entered the 2022 season as the 19th best prospect by Baseball America, 16th my MLB.com and 44th by Baseball Prospectus. Unlike Greene, Casas was not drafted because of his hit tool. He was drafted in the first round of the 2018 draft because he can hit the ball a long way.

While Greene and Casas are very different players, both have one thing in common – they have both reached the majors this season.

So far, their debuts have been a mix of good and bad. Both have struggled at the plate at times. Greene is currently hitting under .250 while Casas is barely hitting about .100 during his brief time with the Red Sox.

But both players have shown off the tools  – Greene’s overall hitting skill and Casas’ massive power – that got them promoted from the minors.

So let’s take a look at the two rookies.

Since being drafted as the fifth overall pick in the 2019 draft, Greene has proven himself worthy of that draft selection. After signing with the Tigers, he was sent to Rookie ball and in nine games he slashed .351/.442/.595 with two homers and eight RBI to earn a promotion to Low-A ball. Greene proceeded to slash .296/.380/.386 in 24 games with another homer and seven RBI and one steal to earn yet another promotion, this time to Class A ball.

About the only numbers that were not in favor of Greene during his first two professional seasons was his 26% strikeout rate, though that was offset a bit by a 10.4% walk rate.

Greene was sure to start the 2022 season in the majors, but he fouled a ball off his right foot in spring training. While surgery was not required, the injury was enough to force Greene to not be ready for the start of the season. After healing and going on a rehab assignment, Greene made his debut with the Tigers on June 18 and has basically been a regular in the lineup since then. 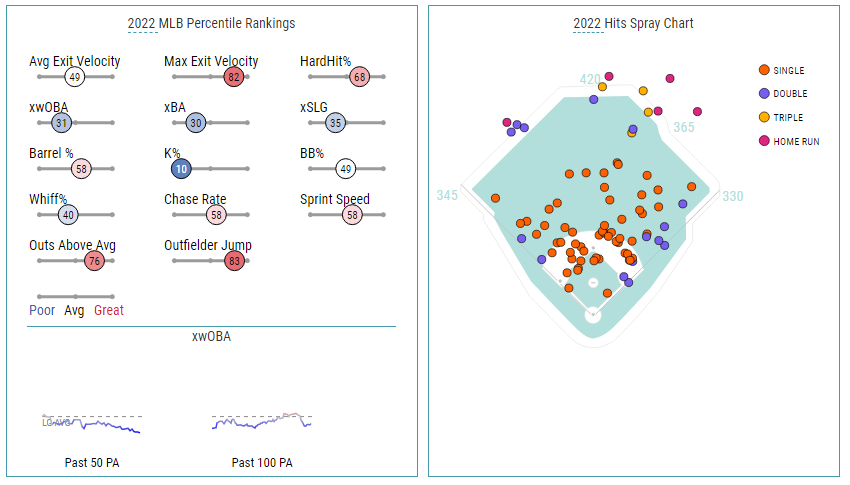 The good news is he has not tried to pull everything. His spray chart shows how he has used all parts of the field to get his hits. His power is still mostly to the pull side, but he has done a great job of going to the opposite field and with some pop.

Greene has often shown his power in batting practice, and it has carried over into games, especially to the pull side. As he gets stronger, his power should show up more regularly, allowing him to be an above-average power hitter.

If you are beating the ball into the ground, it doesn’t matter how much raw power you have or how hard you are hitting the ball off the bat. Ground balls more often than not turn into outs.

Power is his Game

Like Greene, Casas was a first round pick as the Red Sox snagged him with the 26th selection in 2018. Since joining the Boston organization, Casas has been one of the top power prospects in the minors. A member of Team USA at the 2018 Summer Olympics in Tokyo, Casas tied for the tournament lead in homers with three in six games.

Aside from hitting for power, Casas does a great job of getting on base via the walk. His career walk rate in the minors was a very impressive 13.6%, leading to a very nice .374 OBP. Casas does have some swing and miss in his game. In his 284 career minor league games, he has a strikeout percentage of 21.6%. And this season in the minors it was at 20.9%.

In his brief time with the Red Sox, both the walks and strikeouts have been on display. Through his first 16 games, his walk rate is at 17%. However, his strikeout rate has jumped up to 26.4%

Casas has not had a great start to his career with the Red Sox. He enters Sunday with a slash line of .114/.264/.318. But when he has made contact, it has been productive. Of his first five hits, three have ended up over the fence. His massive 6-foot-4 frame gives him plus-plus raw power to all parts of the park, as seen here with this bomb over the Green Monster off a 98 mph fastball from Gerrit Cole.

When it comes to Greene, he should be an above-average hitter, approaching .300 each season thanks to a smooth stroke at the plate. Once he learns to lift the ball more at the major league level, he should also produce above-average power.

While he has struggled stealing bases so far, he is an above-average runner, allowing him to reach double digits in steals each year. We have to remember that he is still only 21-years-old. I fully believe he will figure things out at the plate and be a productive middle-of-the-order bat who will also give you some steals.

Casas doesn’t swing for the fences as he just has great natural power to all fields. Only 22, Casas started to do a better job of working counts last year and so far has shown a good eye at the plate with the Red Sox. I would be surprised if he isn’t a consistent 35- to 40-homer player in a few years. And who doesn’t like that in their fantasy lineup?

Thanks for the read!

I am still hanging on to Vidal Brujan but do you think Tampa has a role for him in mind? He hasn’t hit well in the MLB to say the least. Seems he’s a little streaky as well.

What’s your opinion of Tyler Gentry as a prospect? Power/speed combo seemed to do well in AA.

Concerning Brujan, I was never too high on him and at this point I don’t know what role he would have in Tampa. I’m sure others are still high on him, so I’d see what you can get in a trade.

As for Gentry, he succeeded in the SEC and has done nothing but hit in the minors. Under the old rules, he’d likely be getting a chance to prove himself this month.

At 24, his window isn’t very open, but what outfielders in the Royals system are better? Waters? Loftin? Maybe, but maybe not. Cross isn’t close yet.

If Gentry finishes strong and has a good camp, I see him breaking camp with the Royals in ‘23. I ding think he is a star, but I think he’d offer solid stats if given the chance.