Welcome back for another edition of Top Dynasty Keepers.

We are now in the part of the season where we are jettisoning the players who are completely underperforming and taking the best available player on the waiver wire. But when looking to add someone, don’t just think about what they can do for you this season, but always ask yourself if they can be helpful next year.

Dynasty leagues vary in their rules, so perhaps it is tough to just add someone. Perhaps there is a monetary penalty for dropping a player or adding one. If you are in contract leagues, the cost to drop someone could be a big factor in if you actually want to add someone.

So this week we are going to look at two players who aren’t slam-dunk keepers based mostly on their past performance. The first player is catcher Jonah Heim. The Rangers backstop is rostered in only 55.4% of ESPN leagues and 49% of Yahoo leagues. Until this season, Heim has not distinguished himself at the plate for either Oakland or Texas.

Juan Yepez of the St. Louis Cardinals is coming off a great 2021 minor league season. Before last year he was just another minor leaguer. Now he is a player you may want to think about becoming a member of your dynasty team.

So let’s take a deeper look at Heim and Yepez.

Heim broke in with the Athletics in 2020 and didn’t have a very good showing at all. He slashed .211/.268/.211 and had an EV of 86.0 mph, 1.4 mph below the major league average. With the A’s deep at catcher in their organization, Heim was part of the package that sent Khris Davis to the Rangers for Elvis Andrus and Aramis Garcia.

The Rangers gave Heim a chance to get settled in last year as he got 265 at-bats. Unfortunately for Heim, he didn’t really secure the starting job. Just look at that slash line. He also struck out 20.4% of the time and had a walk percentage of only 5.3%. Those numbers are a big reason why Texas traded for Mitch Garver this offseason. 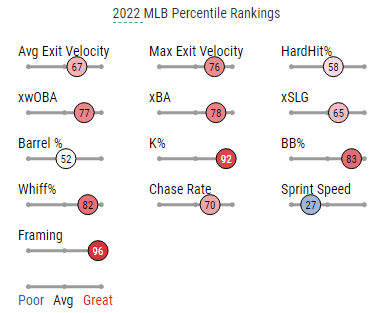 Across the board, Heim has improved his game. And how does he compare to other catchers? He ranks fourth in homers, sixth in runs scored, 8th in RBI and second in batting average, OBP and slugging. Here he is destroying a ball against the Athletics.

Yepez, 24, was first signed by the Atlanta Braves out of Venezuela way back in 2014 for $1 million before being traded to the Cardinals in 2017 for Matt Adams. Up until last season, Yepez couldn’t be considered a top prospect as he never hit more than 10 homers or have an OPS higher than .789.

The Good – Adjustments Paying Off 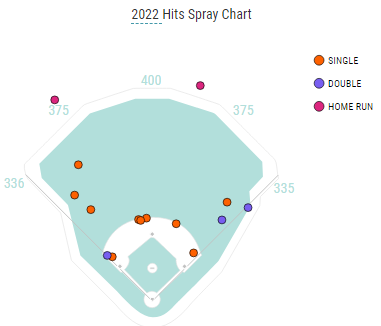 Ahead of the 2021 season, Yepez added muscle and shortened his swing while getting in a great load position with his leg kick. Thanks to that new swing, his strikeout rate dropped to 19% and this year with the Cardinals it is at 15.9% through his first 63 plate appearances with an EV of 90.5 mph. And as you can see from the chart above, he isn’t pulling everything. His pull percentage of 33.3% is three points above the MLB average, but he hits the ball up the middle 54.2% (52.7% is MLB average) while going to the opposite field 12.5% of the time.

Yepez can also play multiple positions, seeing time at first base, left field and right field as he has an above average arm.

What about the bad?

Heim is 27, so he is a bit older than the typical player I look to add as a keeper. However, finding catchers who can produce is finding a needle in a haystack. Right now, Heim is producing and he should be on your roster, especially in leagues that start two catchers.

As for next year and beyond, that is harder to answer. In one league, I have Willson Contreras, so I have been able to hold onto him for years. But in most of my other leagues, I don’t keep my catchers because most just don’t produce like regular position players. In a league with limited keepers, then Heim is probably not a player to keep beyond this season.

But if you are in a league with unlimited keepers or with a high number that carrying Heim isn’t forcing another player to be dropped, then without question he is worth the gamble for next year and beyond.

When considering the question of Yepez being a keeper for this year and beyond, the answer is easy – yes. Yes, there are some numbers that suggests that his early success could be attributed to some luck. But I’m not buying that.

He has power, he makes contact and he is able to hit the ball to all fields, meaning it is easier for him to make adjustments at the plate and be successful. If Yepez is still available in your league, add him and be happy that you did.