This week, the best shortstops are identified and elected.

The third installment for the inaugural list of inductees into the Fantasy Baseball Hall of Fame looks at shortstops, a position which has undergone much churn since 1980.  Previously a non-hitting position, shortstops are now arguably the strongest in fantasy baseball and this is reflected in the inductee selections.  Aside from Catchers, the shortstops have historically been one of the two weakest positions and their representation in the Fantasy Baseball Hall of Fame is minimal – only two made the cut.

Below is a chart the bears some explanation.  To figure out which positions have historically outperformed the others, I combed through the scores of each fantasy worthy player, determined the player’s position, and then derived the average score for each position, each year.

Please note that I excluded Catchers since they are easily the worst position and there is no need to spend any time confirming this.  I also only looked at the period of 1980 through 2002 since we don’t need to look at the most recent 5 years because any player who came to the majors just 5 years ago will not be in the hall of fame.  (Please note however that in the last 5 years the shortstops have had the best ranking three times).

What I found is not surprising.  First basemen followed by outfielders are the strongest positions historically.  Middle infielders take up the rear while the third basemen lie somewhere in between.  The point?  Shortstops rarely help your fantasy team to a great extent.  If they rarely help it stands to reason that there won’t be many elite players, especially when only looking at players who are great for at least five year stretches.   Many shortstops have had very good seasons, but not so many have done it at least five times.

Need further evidence?  After looking at this data for quite some time it has become apparent that a HOF worthy seasonal score is about 10 FBHOF points.  This is the minimum.  Here is list of the number of 10 point seasons for each position from 1980-2002:

Shortstops just don’t help you win as much as other positions and as a result, only two make it in today.

Starting things off is arguably the best fantasy player of all time, Alex Rodriguez.  It seems it has been a lifetime since Rodriguez has had shortstop eligibility, but in his career just 31% of his seasons have been at third base.  The rules therefore require that he goes in as a shortstop and so he will.

Rodriguez’s FBHOF score is a whopping 86.9, second only to Barry Bonds for offensive positions and fourth overall.  His Peak Score of 81.2 is the best ever for a batter and his career total is third.  All told, Rodriguez has been the most dominant fantasy player of the era.  It’s worth looking at his stats season by season, here are his 5 best:

He has been so good that his 2002 season where he smacked 57 home runs doesn’t make the cut into his peak score, the core metric used for induction.  Additionally, every season in which he was a full time player Rodriguez has recorded a FBHOF score of at least 10, something no other player has even come close to duplicating.

As one of handful of players to accumulate 85 or more points, the Fantasy Baseball Hall of Fame will have more on A-Rod’s prowess in a special write-up in the coming weeks.

The second Hall of Fame shortstop is no stranger to greatness either.  Cal Ripken is said to have revolutionized the position and while I am not so sure about that (see Banks, Ernie) I do agree he was really, really good for a long time.

Ripken had two great seasons, 8 years apart no less.  In 1983 he batted .318 with 121 R, 27 HR, and 102 RBI.  In 1991 he was even better attaining a .323 average, with 99 R, 34 HR, 114 RBI, and 6 SB. Both of these seasons scored in high 13’s for FBHOF points and both were of Top-5 overall quality.  In between these years he churned out three other very good to great seasons which makes his peak score 61.0, second to only Rodriguez.  Ripken also joins Howard Johnson and Robin Yount as the only shortstops prior to Rodriguez to finish more than one season rated in the Top 5 overall.

There are several shortstops who could have arguably been elected, but in the end their core FBHOF wasn’t close enough to the magical 65 points to bend the rules.  The Fantasy Baseball Hall of Fame is for great contributors, not just the very good.

Derek Jeter – Cap’n Jete’s was the closest to election with a solid 60.2 FBHOF score.  In the end however, he’s about a half a season away from enshrinement, and is certainly hurt by the high offensive era he has played through.  Jeter has 3 great seasons (FBHOF scores of 12.6, 12.3), one very good (10.3), and another just below the cut (9.7).  Comparing Jeter to Ripken, we find Ripken’s best was indeed superior to Jeter’s – the Oriole has two seasonal scores above 13.5 which is the difference maker between the two.

Can Jeter make it in?  With a great season, yes, of course.  He also has a chance based upon the longevity bonus that can be awarded (1% for every Fantasy Worthy Season).  Assuming he doesn’t increase his peak score, he’ll need a total of 12 non-peak fantasy worthy seasons to be inducted.  He currently stands at 7.  He’s 34 years old this year, so if he plays at league minimum standards until he’s 38, he’ll make it.  Seems likely to me.

Howard Johnson – Players like Johnson likely deserve their own section at FBHOF.  Johnson was elite for two years, finishing as the #1 and #2 ranked batter in 1989 and 1991.  During these two seasons he averaged 106 R, 37 HR, 109 RBI, 35 SB, and a .273 AVG.  He also finished first or second at his position 4 times.  However, that key 5th season isn’t close to greatness as he finished 43rd overall and this wipes out any chance he had for election.

Nomar Garciaparra – Garciaparra is in almost the same boat as Jeter, he had many very good seasons and not enough great ones.  During his peak he averaged a final ranking of 13th among batters; Ripken averaged 9th and Jeter 12th.

Alan Trammell – The Detroit Tiger isn’t all that close to election and his real baseball skills are much superior to his Fantasy Baseball skills.  He’s also hurt because he perennially seemed to miss 20 or more games so his counting stats don’t quite measure up.  In his 3rd and 4th best years he averaged 67 RBI which simply isn’t Hall of Fame material.

Miguel Tejada – It surprised me how far away Tejada is from legitimate consideration.  His 2002 and 2004 seasons were great, finishing among the Top 10 batters and either 1st or 2nd at his position.  But his 2005 and 2006 campaigns fall just short as both result in less than 10 FBHOF points, and his 5th best is well off the mark.  He finished 41st among batters in 2003.  He’s off to a great start in 2008 though, so we can’t quite count him out forever. 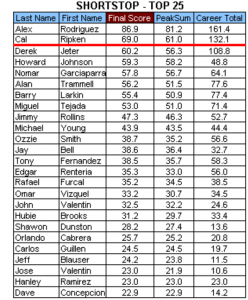