The Fantasy Baseball Hall of Fame in conjunction with Razzball.com, are electing the All-Star teams of the Fantasy Era. For every season from 1980 to today full 23 man rosters will be created and analyzed. We end the series today by looking at the 2004 through 2007 All Stars.

This was a solid team whose success is built around one of the better pitching staffs that we’ve seen. The starting rotation is ranked 4th behind two wonderful seasons from Randy Johnson and Johan Santana, they each scored over 16 FBHOF points:

The rest of the staff each scored over 10 points each, with Ben Sheets being the best of the rest. While his win total was low at 12, his rate stats and strikeouts were excellent.

The relievers were vital as well. Brad Lidge, Eric Gagne, and Mariano Rivera struck out 337 batters between them and combined for an ERA of 2.01 and a WHIP of 0.97.

Offensively, the 2004 team is well below average, especially in the infield. Mark Loretta makes the team with FBHOF score well below respectability for All Star’s; his 8.9 value is the lowest mark since 1981 for a non-catcher.

After 14 all star appearances, this was Barry Bonds’ last team. He was very good again in 2004, drilling 45 HR and batting .362. Fellow legends Randy Johnson and Curt Schilling enjoyed their last great seasons along side him. Also worth mentioning are several other very good players who would never again make an All-Star team: Eric Gagne, Javy Lopez, Ivan Rodriguez, Jason Schmidt, and Miguel Tejada

On the other hand Michael Young and more importantly, Johan Santana, made their first All Star teams. 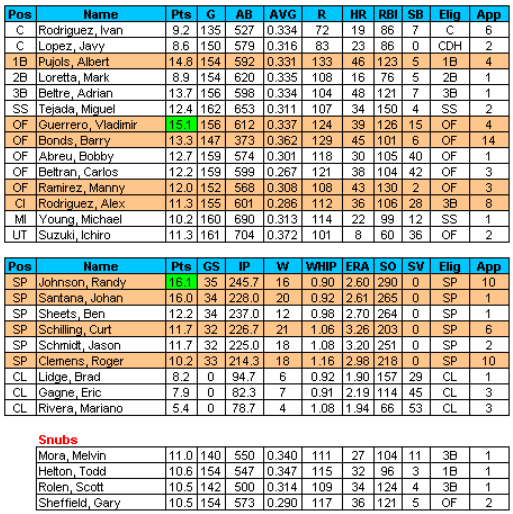 The only good thing about the 2005 team was its infield. Every other position was ranked 17th or worse, but Albert Pujols, Alfonso Soriano, Alex Rodriguez, Michael Young, Derrek Lee, and Chone Figgins made up the highest scoring infield ever. Rodriguez, Pujols, and Lee averaged 45 home runs between them; Soriano went 30/30; Young batted .331; and Figgins stole 62 bases.

The outfield was particularly poor with a last place ranking. The names were fundamentally sound – Bay, Miguel Cabrera, Vlad, Manny, and Sheff but none had a stellar season, as only Ramirez reached the 13 point plateau.

Also of note was the snub of Mark Teixeira. He hit 43 HR and drove in 144 runners but couldn’t crack into the starting lineup. 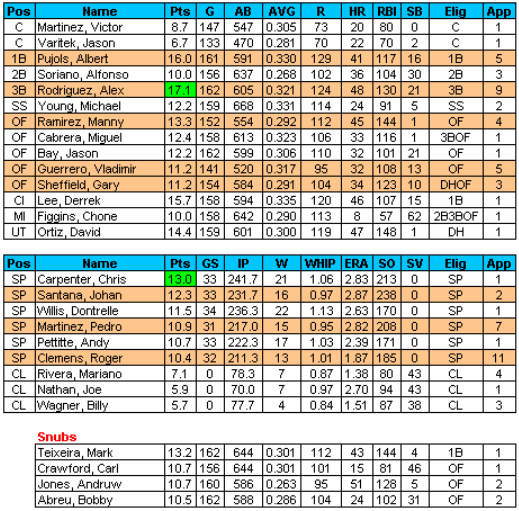 Unfortunately, the 2006 squad was very similar to the previous year’s version. Infielders were still the highest rated, but they dropped 9 slots in the standings as nobody picked up the slack of Alex Rodriguez and his 17.1 points in ’05.

The rest of the positions were about the same which results in an overall ranking of just 25th. When looking at the ’05 through ’07 period, an incredible total of 36 players made their all-star debuts.

Major League baseball was in the midst of a changing of the guard, from the all time fantasy greats of Mike Piazza, Sammy Sosa, Jeff Bagwell, Barry Bonds, Greg Maddux, Roger Clemens, Randy Johnson (and more) over to the new age crew of Chase Utley, Matt Holliday, Ryan Howard, Johan Santana and in 2007 Hanley Ramirez and David Wright. Time will tell if the youngsters will eventually create a new golden age of fantasy baseball. If 2008 is any indication, they likely will. 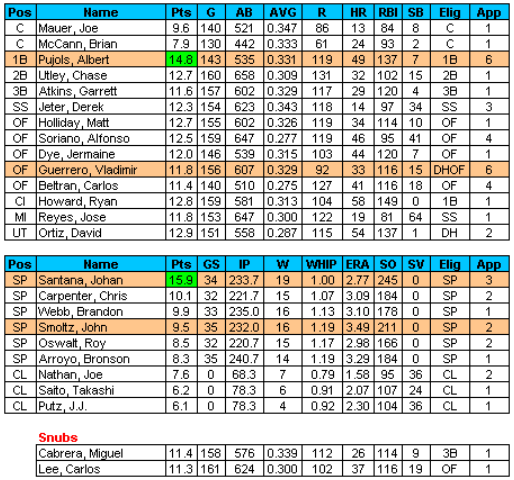 I wasn’t planning a write-up on 2007 since it’s still considered a current event, but we should note the incredible season of Alex Rodriguez. There have been twenty four 50+ HR seasons during the fantasy era. Rodriguez is:

It might be the most complete season by a player ever, fantasy or not. 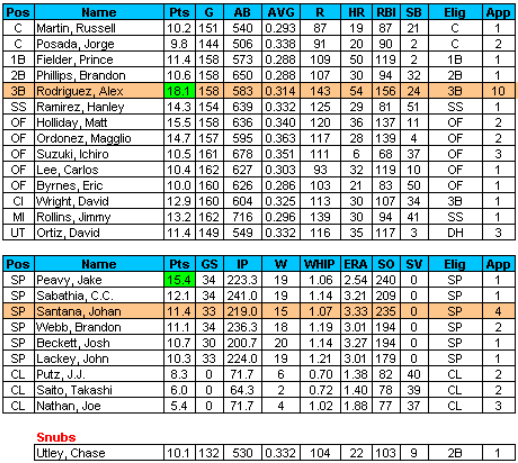