They say “20/20” refers to normal vision. It’s also been said that “hindsight is 20/20.” If you have played fantasy baseball for a while, particularly in auction or keeper leagues, this proverb holds true, especially looking back at waiver adds or trades made/not made over the course of the season while assessing where your team is, or could have been.

Every year, we find ourselves at a crossroads during a snake draft, torn between targeting and prioritizing multiple players and positions, under time pressure while the clock is ticking down, desperate to avoid the dreaded autodraft selection, which inevitably results in a regrettable choice. This phenomenon is amplified at the end of an auction draft where it’s all too easy to say “I bought Player X at this price, but Player Y slipped through the cracks or was bought later in the draft” usually at a much lower and more valuable price.

Keeping this 20/20 vision in mind, let’s take a look back at some recent middle infielder production while looking forward to see what’s to come of these players:

Bo Bichette – Jays – For the first month or so of the season, Bichette owners were surely regretting their first round pick. However, like many players over the past month of play, Bichette has turned things around with a 17/7/18/.290/.356 line, bringing his overall slash to 32/10/32/.269/.317. The good news is that Bichette is crushing the ball (top 5% in HardHit% and top 7 in Max Exit Velocity). I wouldn’t be worried about Bichette, as he’s showing his true talent over the past month, and it’s a matter of time before the Jays lineup as a unit starts wrecking the ball like they did last year, leading to more counting stats opportunities.

Bryson Stott – Phillies – Stott was a preseason favorite of mine, but has started the season off slow, and found himself in the Minors early in the season. His overall line stands at an ugly 16/4/18/.189/.246, but a hot two weeks (12/4/11/.333/.385), coupled with the firing of Joe Girardi is providing Stott with more consistent playing time thus far. If you’re in a deep league and Stott is on waivers, scoop him up.

Fernando Tatis Jr. – Padres – The ultimate pick causing the most regret of many fantasy baseballers who selected him before learning of his wrist injury before draft day. Originally, it was expected FTJ would return from his injury around this time, but recent reports suggest his wrist is taking longer to heal, and accordingly, he is not expected back until July. Sadly, many owners in redraft leagues would love to have this choice back. Wrist injuries are known to zap power, but I still think FTJ can produce a 10/10 season ROS after returning in July, similar to what we’ve seen Jazz Chisholm Jr. do in his first couple months of the season.

Luis Urias  – Brewers – We had tabbed Urias as a breakout candidate this year, but unfortunately, various injuries have gotten in the way of his production, as Urias owns a 16/9/13/.221/.324 line. A lot of Urias’ stats are in line with his career averages. We can only hope for better health for him next year to really see what he is capable of.

Carlos Correa – Twins – Another player that has seen injuries wreck his season. At least in Correa’s case, he’s been hitting the ball hard when he has been on the field. I didn’t have high hopes for Correa in the preseason due to his injury history and lack of speed from a middle infielder slot, but Correa should be serviceable down the stretch, provided you’re not looking for stolen bases.

Jeremy Pena – Astros – If you read Razzball in the offseason, you would have kept an eye on Jeremy Pena and hopefully snagged him with a late-round pick. Pena quietly having a solid season with a 24/8/25/.270/.322 slash line with a few steals added in. The rookie is keeping his K% at a respectable 23.6% and is exhibiting solid skills with more room to grow. Astros management knew what they were doing not overpaying for Carlos Correa in the offseason.

Mookie Betts – Dodgers – I’ve been a Mookie Betts fan for most of his career and was even more thrilled for his fantasy value upon his trade to the Dodgers a few years back. Entering the preseason, I was mostly high on him, yet a bit skeptical he would reach his MVP potential due to his hip injury. Having second base eligibility was icing on the cake, but in hindsight I wish I was more confident his hip ailments were behind him. Mookie seems to be back at full health and has been positioning himself for another MVP run, owning a 52/16/39/.283/.361 line. 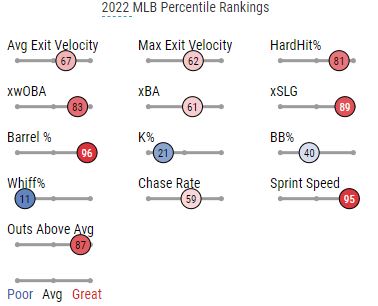 Thanks for reading and have a great week!

What’s up with Baez?….does he turn it around?

Baez has been making weak contact (worst in 5 years) and although he’s due to rebound slightly, he most likely won’t be the player we’ve seen during his time with the Cubs.