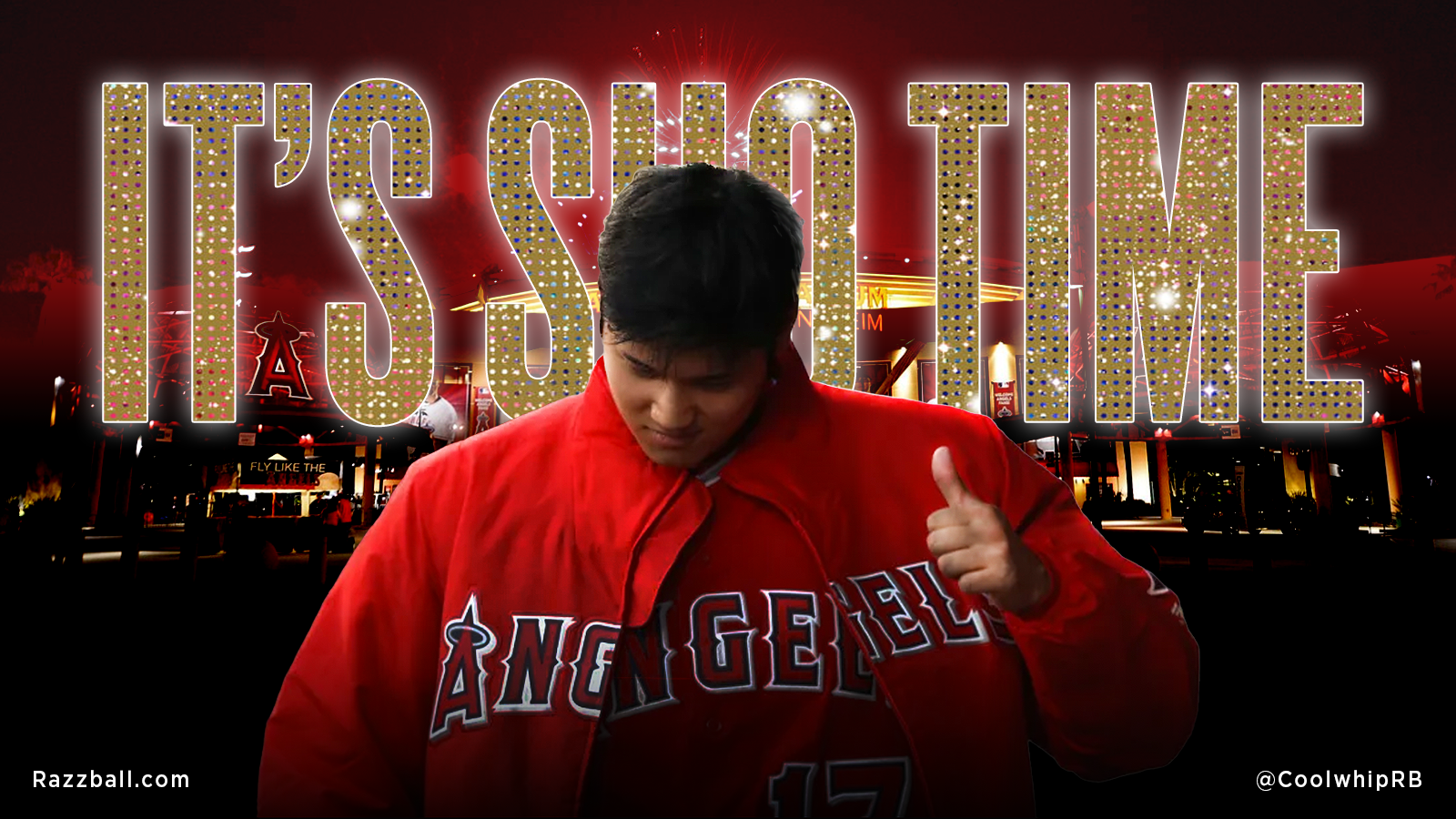 There’s really only one thing I can lead in with this (Coolwhip is about to stan). I like fun. Winning is fun but tastes so much better when it’s not boring. And if there’s one player in the league that embodies that, it’s Shohei Ohtani. There hasn’t been a legitimate two-way player in baseball since George Herman Ruth. Some players like Rick Ankiel in the past and current teammate Jared Walsh have started as a pitcher and ended up as a position player, but no one has been able to succeed on both sides of the ball over a full season. This, though, could finally be the season that we get to see it in all its glory.

The man carved out of marble on Mt. Olympus has descended to this mortal plane once more and now has a full bill of health. Since coming to the states he has yet to enter a season and play through it completely healthy. Elbow injury? Healed and ready to rock with full velocity this spring. Knee injury? Also healed up, and his power stroke is already on display with 2 HRs in his first 5 games after hitting 5 oppo taco home runs during spring training.

In case you missed the nationally broadcasted game Sunday, here is his 1st inning bomb:

He unleashed on the first pitch to him. So far in the early season, pitchers have been looking to get ahead on him with early fastballs. Well, he adjusted. Hearing from Maddon later that this was something they were aware of and something that he was looking for at the plate… early fastballs. Not only did he crush it but in the early going it was already the hardest-hit ball of the season (surpassed Monday by Nelson Cruz, the ageless wonder, at 116 mph). Back in 2019, I gave you look at what Shohei Ohtani is from the hitting side, here. That Coolwhip vintage summarized this:

That is still very true today. Now with more hitting data, we have this to show on Shohei at the dish; (skipping 2020) over 710 ABs he has a batting line of 110/40/123/22/.286… that’s not hyperbole or Mr. Prorater having a field day, he’s already accomplished that at less than full power. Now he’s 100% healthy and has improved his plate discipline some as pointed out in the past article. If you just dial that back to 500 ABs that equates to 78/28/86/15/.285 without the benefit of improved health and lineup. But wait, there’s more! He can pitch now too…

Here is a summary of a healthy Ohtani pitching:

What everyone forgets, is he is a better pitching prospect than a hitter (wild, I know). What all the scouts were raving about most was what he could do on the mound. As you can see above, he can dial up a 101 mph fastball while sitting 98-99. His splitter is what I’d call a Turbo Splitter, coming at you quicker than some pitchers’ fastballs at 92-93. And the third is his slider 80-82 that has more of a late cut movement.

Then there’s his 4th-best pitch, a Curveball, that he hasn’t used much yet but was working on a lot during spring that he can drop in batters like this:

Once he gets that curveball working in games, he’s going to be deadly with 4 weapons that each have different speeds and more importantly a different look and shape. Not everyone is familiar with the type of pitcher he was overseas. Yes we’ve heard he was good… but HOW good was he, and why was he sought-after so much… what’s his potential?

To grasp his potential, we first need to see what the scouts saw. The last 3 years he was with the Nippon-Ham Fighters in the Japanese league he was electric even though it was shortened by injury concerns in 2017. NPB (Nippon Professional Baseball) is often compared to AAA talent level. Which is one reason why established Japanese players are considered more frequently for larger contracts in the international posting system compared to players from other foreign leagues like the KBO (Korean Baseball Organization) that is considered just above AA level. One thing that sets Ohtani apart from his countrymen is age. In the 2015-2017 seasons, he was just barely in his 20’s like many stateside prospects but his competition in Japan was on average 6 years older and more experienced than him. He was dominating his league so young, and since he was under 25 he was considered a prospect by the CBA.

That’s essentially the low-key upside of Shohei Ohtani from the mound. From what we have seen of him so far, his command can leave him a bit from time to time (specifically the splitter as we saw in the fifth inning on Sunday night), which is where that elevated walk-rate comes from, but when he is on he can locate any of his 4 pitches in the shadow zone (see the splitter in the clip above).

His campaign in 2018 was cut short by a UCL tear in his elbow that required Tommy John surgery. And as most of us are aware it takes more than a year to get past it. Well, after the arm was sidelined for all of 2019 he tried to pitch some last year in the 2020 season. That proved to be too soon as his velocity was nowhere near 100% with his fastball clocking in at 94 mph. To make matters worse, last year he had a knee injury too that he was recovering from and didn’t fully trust himself so the extension on his pitches with an uncommitted plant leg became a non-starter for the starter. As it turns out, he needed a little more time in the oven. This year he’s fully healthy and the velocity and mechanics have returned.

Now I get what you all might be thinking, “Coolwhip, we’ve already drafted. And he’s not chilling on my waiver wire.” Sure, I get that. Your league mates might not be reading this article and may not fully grasp yet the potential upside of Ohtani on their roster. Obviously, he has more value in daily leagues where you can move him between your DH/UT spot and P on his bump days. I’m here to say though there looks to be ample value in weekly leagues if Maddon’s roster pattern keeps up.

The kid-gloves are off. Through the first “week” of games, Shohei has hit in every game. He was in the lineup every game up to his start, whereas before they’d rest him the day before. He was in the lineup on his pitching day versus an AL opponent (also new). And on the day after his first start (taking into account he had a brief scare in the 5th), despite resting he was called on to pinch-hit (against another AL team) in a big moment. So something close to 500 ABs could be in cards with him pitching in a 6-man rotation. In weekly leagues, there will be some weeks that his pitching day falls outside of your restrictions and you can set him freely as your DH. Other weeks he’ll have a weak matchup and the team will have limited games that you can set him to pitch. The main takeaway here though is he gives you options. Options that let you play to your strengths and needs.

So what can we expect from the pitching side in 2021 to go along with his Goldy-level offensive production? Grey has him down for 61 IP, 3.44 ERA, 1.25 WHIP, and 71 Ks. Rudy’s projections are a bit more generous with time, giving him 94.4 IP and 100 Ks with a markedly worse ERA of 4.53, ouch. Both to those do not seem very likely to me without injury. Which, that is really the issue here, isn’t it? Projecting health. We’ll call those nightmare scenarios, for differing reasons.

I’ll give you the upside scenario with a healthy season. If he makes every start in a 6-man rotation that would be 27 starts. I don’t know if he has the stamina to hit every day and make all 27 starts. It also wouldn’t be the most prudent decision either. I’m sure there will be some extended breaks here and there and I’ll give him 20-start upside, 110 innings, 128 Ks, with a 3.56 ERA and a chance for more (better) if that curveball works for him as we get into summer. The command slipping occasionally will limit some upside, but there will some starts that he can dominate for 6 frames. The possibility for greatness is too good, I have taken the risk on many shares because it could be game-changing, and would consider making a trade before the price shoots to the moon. The bat will be great and the pitching is icing on the cake. Sho time is Sho’s time.