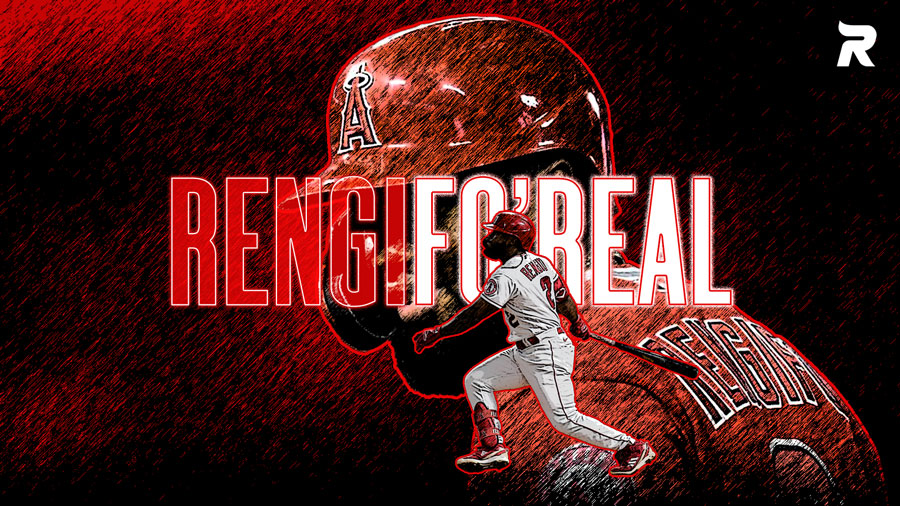 Full disclosure, if you didn’t know already, I am in fact an Angels fan. There I said it. I might have a bit of bias in this by way of hope. To that, I posit you this question: what more is a post on a baseball sleeper (fantasy or otherwise) than a prognostication of hope? Ah, there it is, in its elemental form. We the writers are purveyors of transcendent hope; seeking out knowledge in the bones of analytics and statistics. Carl Jung talked about the shamanistic journey into the wilderness to gain knowledge and bring it back for the betterment of the community (uh-oh Coolwhip thinks he’s a shaman now). Is that what I’m doing here? I certainly hope so. Today, that hope takes the form of Angels infielder Luis Rengifo.

Luis Rengifo has long represented some kind of hope on the Angels roster. He came to Anaheim by way of Tampa Bay in the CJ Cron trade back in 2018. The Angels liked the switch-hitter’s athletic build and ability to play most infield positions and some outfield in a pinch. There was always hope that some power would surface as he developed and, dare I say, we might finally be seeing the fruits of that labor.

After his first taste of the league in 2019, he regressed in 2020. As more of a book was written on him, the holes in his game became known. Albeit a smaller sample, the production dropped off and the power did as well. Then, over the next few seasons, he regained it and built on it.

The real development over the last 3 years is seen in his decreasing K% and increasing SLG. Along with more productive contact has come a better BABIP as well which was substantially low for his speed. There is a concern about his evaporating walk rate which could lead to some long-term problems but, for this year at least, I don’t think it’s a problem. Javier Baez remained productive throughout his mid-20s with a sub-5% walk rate before the wheels came off at age 29 last year. However, I don’t necessarily think this will be his path, and here’s why:

The interesting thing that separates Rengifo from Baez is the growth in his plate discipline. Baez has maintained a 28%+ CSW throughout his career (CSW being called strikes plus swinging strikes). The importance of that is pitchers getting strikes on the batter without contact. Rengifo made gradual improvements on that year over year and, despite some increased aggressiveness in swings, he managed to make a large dent in that last year bringing it down to 23% along with increased contact outside of the zone. This could mean a few things: his aggressive approach is leading him to chase more pitches, or he is fighting off more borderline pitches to stay alive in at-bats.

Since his rookie season, the percentage of FBs he’s seen has dropped by 10 from roughly 60 to 50% which seems to correlate some with the increased swing percentage outside of the zone. The positive side is that from 2020-2021 he hit below .100 on breaking pitchers. Then last year he finally improved that to .259 with a .437 SLG. Rengifo is reading pitches better. There is also something else in his approach that offers hope. Although his pitches per plate appearance have dropped from 4.1 to 3.5 he has been putting the ball in play sooner and getting on base rather than watching those pitches go by and striking out. Rengifo is identifying strikes better, specifically with breaking pitches.

Lastly, the splits. Yes, his splits were heavy on the right side with a lot of his damage done against LHP. Which in many cases would lead to someone being platooned, and, it still could… but… that was a new development for him.

Prior to last year, he had all of 4 HR in 231 PA against LHP pitchers, and then he hit 11 HR in 172 PAs in 2022. Before last season he was a more productive hitter against righties and then somehow his splits shifted. If he makes any of the same improvements in power against righties as he did against lefties we could see a real breakout.

A lot of these improvements have been under the radar. You look at his statcast page and it looks rather dull. But maybe this is just the calm before the storm: the swell in the clouds before the gust of wind. He’s going to have his opportunity to sink or swim this season depending on how the Angels man the middle infield. As with all sleepers, there is some risk. The primary risk for him could be playing time and sharing ABs up the middle with Fletcher and Urshela… which could come down to Rendon’s health. I like those odds as Rendon hasn’t been healthy for 3 years.

This winter several teams have asked about the availability of Luis Rengifo, especially after the Urshela and Drury signings. So it’s also possible he could be dealt into a starting role elsewhere. Currently being drafted at an ADP of 289, I like him as a cheap MI flyer and if he either earns or finds himself in a starter’s role the upside of a .260+/20/10 season is quite tempting at the price. He could be a light Gunnar Henderson, call him Laser Tag.

Great post Coolwhip; I already have Rengifo on a couple teams and he’s in my deep league 3B post tomorrow. Could be a great value, and if he isn’t, nothing to really lose as late as he’s going!

I remember your original bio pic was Trout but never noticed any bias, lol. Great article. Thanks!

Thanks for reading! Yep! I try to analyze objectively the best I can.

Nice write up! I found him late last year to plug in for injuries in a deep league. He was a nice little find!

Yep! feels like the start of something. Thanks for reading!

Good stuff. He keeps ending up on my rosters so far.

Thanks GK! Yeah, right now he’s falling right in the window for MI

If you look at total bases for the second half of the 2022 season, Rengifo was tied for 11th (with Pete Alonso) in all of MLB.
Semien lead all second basemen after the All-Star break with 138 TB, followed by Altuve (136 TB) and Rengifo (131 TB). Third in TB of all second basemen.

Our man Luis had more total bases in the 69 games (288 at bats) than Vlad, Christian Walker, Adolis Garcia and Lindor. Hard to figure how he did it hitting an unspectacular .267 but slugging a respectable .455.
He struck out a lot less and his power came out of nowhere. He is a switch- hitter and can play anywhere which bodes well for playing time. I think he plays everyday. I can’t believe he will be stuck at 9th in the batting order as some baseball website suggest. Rendon will be hurt which also is good for Rengifo.

Yes, all the things. Thanks for reading!