Back in the pre-season, we launched a new player rater methodology called Point Shares to estimate fantasy baseball player value.   There aren’t a lot of Player Raters to be found other than ESPN (Y! and CBSSports.com don’t have ones) but we feel ours is better because it factors in variables like a player’s position (e.g., Hanley Ramirez’s 33 HR is worth more than David Wright’s) and the point totals actually represent something.

A ‘point share’ is the estimated impact on a team’s points by substituting a player for the average drafted player at his position on a team filled with average players.  So in a 10 team league, this team would otherwise earn 5.5 points per category (55 points).  Substituting Cliff Lee for Zack Greinke on an average roster would mean an average of 6.6 points (6.40 for Cliff Lee, -0.24 for Greinke).

We will use this as the foundation for future articles but here are answers to some anticipated reactions:

1) How could pitchers be in the top 4 slots?

It might be surprising to see starting pitchers in the first 4 slots.  This isn’t a flaw in the ratings- it’s a flaw in your thinking (sorry).  The best pitchers in a season generally dominate 4 categories (W, K, ERA, WHIP).  While they don’t contribute in Saves, there is little opportunity cost to this since saves are concentrated in 30-40 players and there are 90 pitching roster spots.  For hitters, it’s rare for a player to be excellent across more than 3 categories and there’s a larger opportunity cost for the categories they are not great (i.e., OFs like Ichiro and Taveras hurt HR/RBI).  Only 6 hitters in 2008 ranked above average across all 5 categories – Pujols, Wright, Berkman, Holliday, A-Rod, and Braun.  Hanley Ramirez had a great year in Runs (125), HR (33), and SB (35) but was mildly valuable in AVG (.301 or .006 less than Ryan Theriot) and negative in RBI (67 or tied for 6th among SS).  Converting Roy Halladay’s stats to an OF (W=R, HR=SO, RBI=WHIP, SB=SV, AVG=ERA) would net 119/34/121/10/.335.  Sabathia, Lincecum, and Cliff Lee weren’t far off this.  The reason why it’s usually not advisable to draft a pitcher in the 1st round is the unpredictability of who’ll be the top pitchers (none of the top 4 were top 50 picks based on MockDraftCentral’s Average Draft Position) vs. their true value.  Here’s a more thorough explanation of a pitcher’s fantasy value.

2) Why are there are only 110 players that have positive value when there are 230 open roster spots?

In Point Shares, 0.0 represents an average player at their position.  So it is expected that about 1/2 the eligible players are above average, 1/2 are below.  A negative score doesn’t mean that a player isn’t worth having on your roster – it just means that he’s below average.  If the system was built with 0.0 representing a roster-worthy player, the points would then represent the value of a player on a team in last place.  This overestimates the value of a player when measuring the impact of a player swap (e.g., Lee for Greinke) for every instance except when a team actually did finish last.  The best approximation of player value is starting from the middle.

3) What is the highest/lowest score possible?

While no hitting scores fall above 4.5 or below 4.5 (closest is Willy Taveras’s 4.3 in SB), the Point Shares system is just a model so it is conceivable that an extraordinary performance would net more than 4.5.  The only cases in 2008 were extraordinary bad ERAs and WHIPs.   (You’d think K-Rod’s 62 SV but that only netted +3.9). 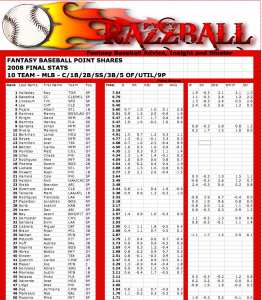