Just a quick introduction – I’m the “new guy on the block” here at Razzball, Chris VanDyke. Many thanks to Grey and Jay(Wrong) for asking me to join in all the fun. I’ve competed with Jay in several deeeeeep and complex fantasy leagues involving more prospects than most care to follow for several years. [Jay’s Note: Sorry for trading you Heyward.] When involved in leagues as deep as these, most owners are forced to pan for gold to find hidden gems when drafting.

I plan to utilize this space at least once a week to shine the light on an “under the radar” prospect that most folks haven’t necessarily heard much about from noted “prospect gurus” such as Jonathon Mayo, Keith Law, and our revered friends at Baseball America, who typically have to focus on the higher ranked and more talked about future stars, since their readers tend to dig for information about them. 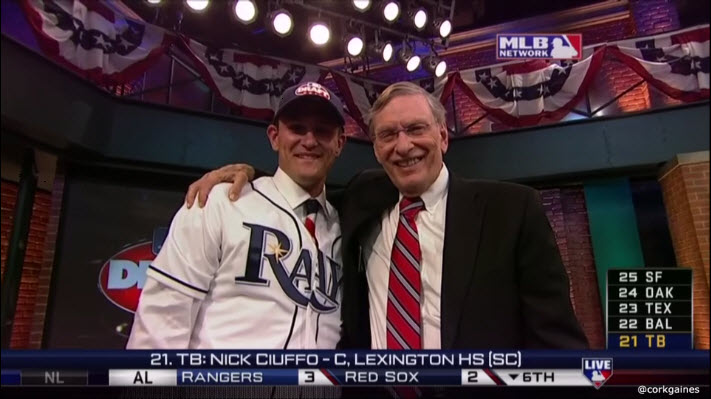 This week’s Panning For Gold – Finding The Prospect Hidden Gems focuses on Ryne Stanek, a right-hander currently pitching for Tampa Bay’s Hi-A Bowling Green Hot Rods in the Midwest League. The Mariners initially drafted Stanek in 2010 out of Blue Valley High School in Stillwater, Kansas, where he finished his Senior campaign ranked as Baseball America’s #42 draft prospect. Rather than signing, Ryne elected to attend the University of Arkansas where he piled up impressive career numbers – 22-8, 2.55 ERA, and a BAA of .255. The Rays then picked him at #29 in the 2013 Draft following his Junior season with the Razorbacks, giving him a slot-value bonus of $1,758,300.

One reason for singling Stanek out is that he reflects yet another area where the Rays front office tends to consistently stay ahead of the organizations that aren’t always focused on pinching every last penny – Ryne profiles as a potential front of the rotation (#2 or better) SP, and did at the time he was drafted as well, but many teams allowed him to slide because of health concerns. He underwent surgery on his right acetabular labrum (the ring of cartilage surrounding the hip joint socket) during his 2013 offseason. Now that the slotting system and penalties for exceeding spending caps has begun to take full hold, this year’s draft shows that several organizations have followed Tampa’s lead, with noted high-end arms like Jeff Hoffman and Tyler Beede taken in the First Round even though they aren’t likely to begin their careers prior to the middle of next season.

The main reason to keep an eye out for Stanek to begin climbing prospect ranking lists (he began this season on BA’s list at #11 and #14 on John Sickels’ list) is two-fold:

1.)   While the Rays will continue to be as careful as possible with his health (Ryne has only made 6 starts including Sunday so far), he’s shown much of what was projected – his overall line of 2.16 ERA, 1.17 WHIP, 33.1 IP, with 27 Ks and a 2.7/1 K/BB Ratio have become more dominant as he’s worked his way further along, having given up 12 hits and 2 earned runs over his last 18 IP (3 starts) with 15 Ks and only 4 BBs. He’s quickly showing he can be pushed a little more aggressively than most of the younger Pitchers at that level (and should be obviously).

2.)   Tampa’s economic situation will continue to demand that they produce inexpensive talent capable of competing at the MLB level for the foreseeable future if they hope to remain competitive in the tough AL East, leading to the need to move players along more quickly than most other organizations.

Armed with two potential plus pitches in a fastball that sits between 92-95 MPH (touching 98) and a nasty 84-87 MPH slider, Stanek could become an inexpensive option as a future closer for a team that is always looking to save wherever possible. If the Rays are pushed into the situation where they’re unable to wait for him to develop better command and a more deceptive motion and they land reasonable options in return for David Price (whenever they eventually deal him), he definitely fits the profile as a future replacement for the struggling Grant Balfour. Given the combination of the presence of potential closer Alex Colome closer to ready to help at the MLB level and the questions surrounding the potential ceilings of Jake Odorizzi, Taylor Guerrieri, Enny Romero, Nathan Karns, and Blake Snell without knowing what could be coming in a Price deal, expect Tampa to continue to proceed in developing Stanek as a SP until things become more clear.

After seeing what Tyrell Jenkins did, you like him over Keury Mella in dynasty?

Thanks for the great article

While Jenkins’ start for Palm Beach last night was certainly impressive, the questions surrounding his chance to become a frontline SP were always about control BEFORE his shoulder surgery. From an organizational standpoint you can never say never, but I look at Jenkins much more as a Shelby Miller type guy than a potential Michael Wacha – that’s not exactly a bad thing, but I think the combination of control issues with shoulder concerns limits his upside as much as Miller’s lack of a third pitch limits him.

While Mella’s K/9 rate has declined slightly with each step up the ladder thus far (something you obviously expect as he faces more advanced hitters), his K/BB ratio has improved with each jump as well. I view that as a substantial step forward. A 20 year old walking less than 2 batters per 9 innings in the Sally League is definitely noteworthy IMO. Augusta has one more 4 game trip to Asheville (August 14-17th), so I’ll hopefully get a chance to take a long look at him if the Giants don’t decide to bump him before the end of the season.

For me it’s still Mella, but I tend to be really leery of shoulder injuries personally.

Hey, how would you rank the first few prospects from the recent MLB Draft if my dynasty league is drafting them? I would probably put Rodon first because of his proximity to the majors, but after that the next two or three are less clear. Thanks!

Rodon is indeed at the top of my personal board. Most reports you read that have Brady Aiken and Tyler Kolek with eventual higher ceilings assuming Rodon doesn’t revert to his 2013 form. It’s awfully tough to disagree with that given the fact that the typical rule of thumb is to take the best player currently available regardless of position or reputation. When you’re a GM charged with making that call, you’re not typically going to take someone with an earlier projected ETA over someone with higher present upside when you’re drafting in the early part of the draft.

Unless you’re in one of those atypically deep farm systems that was mentioned earlier, you’re likely to run into more situations where “need” has a little more effect on your line of thinking than an MLB GM likely might.

Assuming you’re competing in a typical keeper league that you’re closer to becoming competitive and are looking for the player that will help push you in that direction, my board looks like…

@Chris: Wow thanks, that was a very helpful answer. I wasn’t even thinking about Schwarber that high, but I guess that makes a lot of sense because of position and closeness to the majors. Thanks for the help!

Have we hazed the new guy like what happened to me yet? I still can’t look at shucked corn without a twinge of agony.

So like do we add the guy? Tuck it away for next year’s draft? I’m a bit corn fused.

That would depend on your league’s depth. The leagues Jay and I have competed against each other in are typically between 16-24 franchises with two drafts per year (Rule IV or FYPD that just concluded and a Rule V that usually covers July 2nd international signings and players that might’ve slipped through the cracks.

My best guess as an ETA for Stanek (again depending on where the Rays ultimately choose to develop him) is late 2015 as a November call-up if he remains a starter at the earliest. I base that projection on the assumption that David Price is dealt prior to this year’s deadline. When looking at the potential Price suitors, the ones with the highest end likely offers will involve not quite MLB ready prospects. Friedman & Company’s goal in a Price deal is to receive as many high-ceiling close to ready prospects as they can conceivably get in a Price deal, but if they follow their relatively consistent MO they are likely going to wind up accepting at least one or two players that are further away with higher potential ceilings if they hope to “win the trade”.

In that case, you’d expect that the design would be to land players that would be ready to contribute starting in 2015 and later assuming they continue on their present course in the attempt to keep from having 3-4 key contributors scheduled to receive substantial raises via arbitration at the same time.

Good question Swfcdan. With just about every prospect, it tends to depend on how he’ll ultimately be used. Given the fact that 25 of the guys on BA’s preseason Top 100 list have already been promoted (most of them likely for good), I could see making a case for him in the midseason Top 150 if not higher. A promotion and success against hitters at the next level would cement that type of consideration. He’d be a lock to be in the Rays Top 10 at this point, and I could see him pushing Enny Romero as the #2 SP on their list – Odorizzi obviously won’t qualify any longer. Alex Colome has been strong thus far, so if they convert Stanek to a reliever you have to assume Colome would still be first in line as a late-inning option.

Nice to have a companion to Scott around as prospect gurus. Complete the sentence, Stanek is currently a top ___ prospect?

Sorry…replied in the wrong spot…still feeling my way around the site.

You had me at Denny Crane.

Nice article, I look forward to your weekly column!

A tip of the turban and welcome in, Chris. Nice work and anyone with a Denny Crane avi is a friend of mine. Cheers.

Some better than others as evidenced by the Heyward “homer” trade mentioned above!!!

Yup. We play with constitutions that are like a thesis on the European textile industry and it’s affect on the modern French bourgeoisie. Too much fun.