Catcher is a unique position in the fantasy game.  We sometimes play with a single catcher making the pool reasonably deeper while other times strapping ourselves with limited options in two catcher leagues.  The one thing the position is not known for is augmenting the lineup with flexibility.  A few years ago, the versatility and intrigue of speed from the catcher position drew us to Austin Barnes as he rose through the Dodger’s system.  While that may not have panned out with a fantasy superstar, when any player comes along in that mold it forces us to look at what else the catcher position can provide.

The last two seasons have introduced us to two unique players behind (and around) the dish in Austin Nola and Isiah Kiner-Falefa.  Looking at Yahoo eligibility Nola will enter the season with C, 1B and 2B capabilities while Kiner-Falefa will carry C, 3B and SS.  Now not all leagues are as forgiving as Yahoo and Isiah did not log a game at catcher in 2020 instead splitting time on the left side of the infield where he is expected to be for the 2021 season.  Alternatively, Nola saw 44 of 46 games played behind the dish.  Regardless of how they fall in your league, there is bound to be intrigue in these two versatile players.

It was a tale of two seasons for Austin Nola in 2020.  He spent the first half in Seattle delivering a stellar line across half a season (29 games) batting .306 with 5 home runs, 15 runs and 19 RBI while showing solid plate discipline.  Upon being traded to San Diego, he struggled to the finish over the last 19 games with a .222 average, limited counting stats and a ballooning strikeout rate.

Assessing the season, I am inclined to toss out the San Diego tenure as a small sample size after being traded during a challenging season.  Under the covers, Austin improved in several categories compared to the prior season including his Barrel rate, xBA, Hard Hit rate. K% and many others in just his second season in the majors.

Many projection systems do not expect a full workload which will keep the draft price reasonable in 2021.  Nola did see his team bring in another catch via trade (Victor Caratini), but I expect limited impact on his playing time recognizing elite pitch framing skills and a solid bat.  While he is already on the wrong side of 30 and will be batting at the bottom of a strong lineup, the skillset is strong.   Nola showed growth across the board in 2020 as previously mentioned, and I expect him to continue to build on that success.

Last season was an opportunity for Kiner-Falefa to show what he could do in an open Rangers lineup.  He played in 58 games delivering solid numbers for a player that was basically free at the draft table.  As the likely second catcher in many leagues, Isiah delivered a 150-game adjusted line with 72 runs, 21 steals and a .280 average.  Combine those figures with a 92nd percentile K rate and top-notch sprint speed, there appears to be a lot to like.

Appearances however are not what build championship fantasy teams.  On that same 150-game adjusted line we only would have seen 26 RBI and 8 home runs.  Those figures are not too surprising when we recognize that Kiner-Falefa carries virtually no power requiring him to garner all his value in positional flexibility and speed. 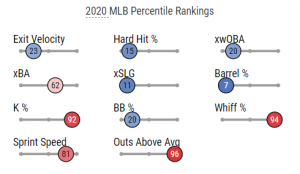 For the upcoming season, especially in two catcher leagues, there is a space for Isiah Kiner-Falefa.  He will be delivering below average power and run production numbers but gives a slight boost in the speed category which is atypical from the position although if he does not improve his efficiency (8/13 in 2020), that green light may fade.  Drafting him as help in the infield however is a path that I would leave less traveled.

In past hitter profiles, we have visited hitters being taken at a similar point in the draft but clearly that is not the case for these two gentlemen.  If we look at them relative to their position and value in the draft, there is still a clear winner in Aaron Nola’s older brother.  Austin is a late bloomer and really found his way the last two years showing signs of a breakout.  Do not let a small sample in that later part of 2020 deter you and invest in the middle rounds.  Even if you happen to pull in a catcher earlier, Nola would be an interesting pickup to fill your middle infield slot while providing a sense of security at the catcher position.