It does not take much in our game to go from fantasy darling to swift afterthought.  Take for example the season line of 86-23-92-.310-2.  This is the last full season in 2018 for Scooter Gennett of the Cincinnati Reds.  After an injury stunted 2019 season and a trade to San Francisco that did not jump-start his season, he was simply out of the game.  So what is the point of all of this besides the fact that I simply miss Scooter as one of the fun personalities in the game?  Today, we are taking a look at two first basemen who were generally afterthoughts in spring drafts and still do not get their due nearly halfway through the season.  Hopefully, they both have better fates than Scooter.

First up to the plate is Christian Walker representing the 45th first basemen off the board in the spring.  Looking around at the fantasy ‘expert’ rankings for the rest of the season, we see that Walker is sitting in the 140-150 range of all hitters.  So is that fair?   Sitting in the top five power hitters in all of the league with 19 homers through games on Thursday, Christian has delivered solid counting numbers as well.  His downfall comes in the form of a batting average around the Mendoza line and zero value on the base paths.  Essentially, on the surface, we have nothing much to write home about.

So another power hitter in the mold of Adam Duvall or Eugenio Suarez is really not that intriguing.  However, there is more than meets the eye with Christian Walker.  Hiding behind that dreadful average is the best strikeout rate of his career, the absolute lowest BABIP in the league, and a rising flyball rate.  Add the pieces together and his xBA is .277 representing a much different picture of a hitter.  Luck is one thing, but he has made noticeable changes at the plate as well with a swing rate nearly 7 points below his career average and a drop in his aggressiveness in swinging at the first pitch he sees.  Basically, we see better pitch selection and recognition leading to improvements in his underlying profile.  Take a look at the Baseball Savant profile below and see if you agree that Walker should no longer be overlooked for the rest of the 2022 season and beyond. 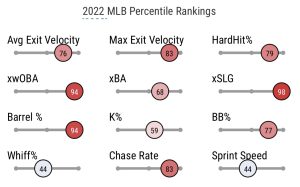 The 2020 AL MVP and 2014 AL Rookie of the Year does not generally feel like a player that would be forgotten, however, he was only the 6th first baseman off the board in the spring going in the 7th round.  Going that late almost feels like an insult to a player coming off a season of 30 homers and 117 RBI.  The same ‘expert’ rankings we touched on before have Abreu as the 57th best hitter for the rest of the season.  Now in his age-35 season, the power has dropped slightly and he appears to no longer have those .300 average seasons in his arsenal.

Before we jump to conclusions about an aging hitter on a downward spiral, we need to check the evidence.  A career-low HR/FB rate could explain a slight drop in power.  The plate approach is the best in years if not his entire career as he continues to trade strikeouts for walks.  All of this pairs quite well with the best exit velocities of his career that place him in the top three percent of the league.  If we trust the expected stats, his xBA is .305 and his second half looks to be a reward for those owners that bought under the radar.  While not the same bargain as Mr. Walker, the jig is not up here for this power hitter. 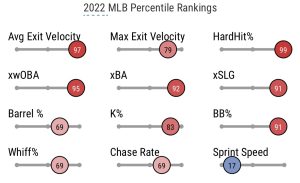 Great stuff as usual. Missed out on Walker. I just lost Ty France and thinking how to make roster changes. Happ & Vaughn are available on the wire. Would you rather have Happ or Vaughn over Morel? I have Cruz and Greene, so i think I may be able to get similar production out of them. Thanks!

Give me Vaughn for sure. I think he has a lot in the tank. Cruz and Greene have a wide range of outcomes so let’s hope for the best!

That’s what my gut was telling me. Really appreciate it! Hoping one of those prospects pans out in the 2nd half.

Nice work! What are your thoughts on Edward Oliveres? Does he get some run finally? I droppped Lane Thomas for him in a 13 team dynasty 5×5…thanks for the great insight!

I was looking at Walker for weeks, but never grabbed him…

Kwan is available as well, but I like Oliveres better because of his power…but Kwan is playing everyday!

I think the Royals are going to give Oliveras a chance to run with Perez hitting the IL opening up
Some space in the lineup. He always seems to hit and there isn’t a better time to try him than now!

Good article! I drafted Abreu, then later added Christian Walker, but foolishly dropped him. Abreu is STILL on my squad though! Glad to know that my 1B will still produce, though perhaps not at peak level. 1B isn’t a deep poqwe position, need a strong 1B for the season. I suspect that if Walker were on a better team, his hitting would improve even more. Regret dropping him but still hope he gets traded to a much better team!

Thanks for stopping by. Little did you know, this article is written just for you. Here at Razzball, we have incredible analytics behind the scenes!

Kidding aside, I expected to dig into both players with opposite results than the actual outcome. I had to go pick up Walker myself after digging in!