This week we start getting into hitter profiles for the 2021 fantasy baseball season, and what better way to start out than two guys battling it out for draft position at the end of the first round.  Not only that, but Trevor “walking pun” Story and Christian Yelich’s boyish looks are just too tempting to pass up for any writer.  The downfall being that there are way too many jokes to write and so little word count to do so.  Like honestly, we could go into a Story about the how good the Marlins could have been if they cared about winning when they had Yelich.  But alas, wasting time when I could have just stuck the pun in the title and moved on.

Alright, let us get to why you are reading, each week I will be grabbing two hitters that are close to each other in ADP and breaking down their 2020 (and likely 2019) with what I would expect in 2021.  Then we will make like a good ol’ western, take everybody out back and have a true standoff until a winner prevails.  Let us jump into this and see where it takes us!

On the flip side, much of his batted ball profile remains strong with league leading exit velocity and hard-hit numbers to coincide with his worst BABIP of his career nearly 100 points below his career average.  If we simply see some regression to the mean, it will mean a much better average and more opportunities to pad those counting stats.

Earlier this offseason, Craig Counsell told us “It’s not going to happen again” so what more do I need to tell you?  If anybody can rock that Craig Counsell batting stance, I am not arguing with them!  I believe Yelich will be closer to the 2018/2019 version and return solid value on his draft day price.

If there is one red flag that I do call out, there was additional passivity present in 2020 that we had not seen before from Yelich.  He had by far the lowest swing rate of his career at under 35%.  I tend to believe this is the symptom of an elite hitter trying to figure things out when the hits just are not falling.  But if this trend does not right itself early in the season, do not be surprised if we do not see a full bounce back.

Trevor Story was a 5-category monster in 2020…and 2019…and 2018.  If you extrapolate his season across 150 games, he would have gone 104/28/71/.289/38.  Now, we expect a few more RBI as things even out over a season and Story probably is not going to be swiping 40 bags.  However, that is three straight seasons of first round production from a guy who has hardly sniffed injuries since he burst into the league.  I will pay for consistency and health!

Underneath those numbers, we continue to see the maturation of a hitter.  A few stats jump out to show that improvement in 2020: 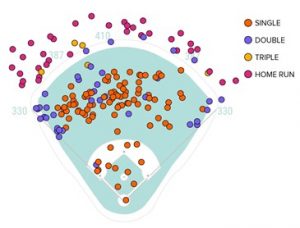 Going into 2021, there is no reason to discount Story and the hitter’s haven of Coors Field.  He will continue to mash and more importantly for a first-round price tag, he will help you in every other category on the board.  This is a high floor, high ceiling pick.  I would start looking at Story in the middle of the first round.

This battle of heavyweights really is no match going into the 2021 fantasy baseball season.  While Christian Yelich should and will bounce back from his disappointing 2019, Trevor Story is continuing to grow before our eyes.  There was a point last season where I would have (and did) ranked Story above a certain San Diego shortstop as the top middle infielder in fantasy.  While I am not going that far here, he has shown true growth in his profile and is the superior fantasy option.  Shortstop has become deeper the last few years, but relative to outfield there still is a bit of position scarcity value I will place on Story as well.  Add this all up and we are grabbing Story in the middle of the first round.  Maybe you get lucky and Yelich is hanging around in the second somehow…that would be a nice 1-2 punch.

Yes, I won the OL Championship. Even with Yelich going down with a fractured kneecap.
Not getting Story @19 or Cole @30 or Castillo @115 or Hader @139, but you can get 4 of the others at the same price today and that doesn’t include Clevinger.
You will also get Yelich in the 2nd round now.

Great draft for sure! Up until that Gleyber pick, but even though I was low on him I don’t think anybody saw that drop coming! I would love a Story/Yelich start in 2021.

Story at #19 is either ridiculous, stupid, genius or perhaps all three. No way in hell Story drops to #19 in my league. He’s the starting shortstop at Coors and been a top 5 players three straight years. Do you play with a bunch of third graders?