Do you believe in life after love?  Well, Cher certainly does and if you love Adalberto Mondesi then you might just be asking yourself the same question!  For those of you that resisted the temptation, please take a bow!  After that awkward and mostly pointless Cher analogy, let us move on.  It is still early in the 2022 fantasy baseball season, but fortune favors the bold so it is time to make some early tough calls.  Because this is fantasy baseball and we aren’t giving out participation ribbons!  This week’s hitter profiles take a look at some hitters getting some early love and decide whether they are a buy, sell or hold.  Join me as we start in Kansas City

A fantasy darling in his rookie days with Boston, Benny has appeared refreshed in the lower pressure environment that is KC.  Hitting .393 so far this year and carrying a strikeout rate below 12%, he certainly is intriguing.  However, the intrigue stops there.  The 17% hard hit rate paired with the .430+ BABIP are clear indicators that tough days are ahead.  Unfortunately for us, Benny has the appeal of a bench outfield bat and noting more.  This is an open and closed case for this one-man jury.

Getting out of the gate quick in the early going, Sanchez has been a nice find for many folks this season.  A combined 20 R + RBI on top of three homers across only 17 games is a top 100 performer.  Combining the numbers and a very pretty Statcast profile should have anybody excited. 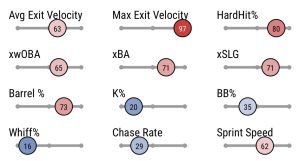 However, there are some warning signs.  Sanchez did the vast majority of his damage through a hot first week or so.  In his first 9 games, he delivered over half his season line with an encouraging 20% K rate and a bit of luck.  In his last 8 games, he has been hitless 5 times and is striking out in nearly 40% of at bats.  The truth is certainly somewhere in between, but Sanchez is likely going to be a hot or cold bat this season as he keeps adjusting and growing.  I think there is a buyer that overpays for the early fireworks on Sanchez.  I do like Jesus in the long term, but don’t think his trade value will be higher.

Verdict: Sell if the price is right

A less exciting name, but certainly off to a useful start on top of his generally favorable position flexibility, Hunter Dozier peaks my curiosity.  He seems to be making really good contact right now even if the numbers are not quite there yet.  While it is early, he has been barreling balls at nearly a 20% rate which is twice his career average, and showing improved exit velocities.  The same size is too small to stabilize but still nice to see.

If you treat him like he is a bench or an off day plugin then he is most certainly a hold.  There might be somebody out there that sees a true breakout in the making based on his quality of contact.  If they are willing to pay a premium you could be Royally happy (see what I did there…).

I wrote this in this mornings daily column but…

Akil Baddoo, what’s up with him?
He had a good year, considering he was a rookie last year, but he looks lost. Many players look lost, but they have a body of work.

I like Jonah Heim profile so far this year. Anything suggest he’s as good as his early season profile suggest?

I will oversimplify Baddoo. He had two hot months last year due to some nice luck. He struggled in the last few months and has simply continued the trend. His quality of contact is nearly identical year to year. If he was not in Detroit and one of the few bright spots in 21, he wouldn’t have a job.

For Heim, he is quietly solid. If you go in with the mindset for a #2 catcher, you could do much worse. He seems to be getting comfortable with MLB pitching.

I am not excited by Walls. I think he is simply keeping a roster spot warm for Brujan. Solid utility or backup player for an off field team which means waiver wire for fantasy.

Thanks for dropping in!

Thanks for the article. I wonder if Profar’s start is a mirage. Would you sell or hold him at the moment? Do you prefer Cronenworth or Profar as well? Staying out West, as for the Rockies are you believing Blackmon’s power? Do you prefer him or Grichuk?

Last edited 2 months ago by Jeffe
0

I have to same Profar has made a few improvements, but not to the extent I am putting much stock. Give me Cronenworth in real life and fantasy. With Blackmon, his underlying numbers have been better the past few years but the results haven’t been there. I don’t see that getting any better and have to go with Grichuk. Not an endorsement on Grichuk as much as lack of confidence in Charlie.

Mr Brewer!
Prefer which of these three:
Flores, Urshela, Neuse?
Thanks!

I am taking Urshela from that group. He is not exciting, but he does produce.

curious about Tay Ward ? can this dude keep this going ?

We both know he can’t keep up the current pace, but he does look to have found some improvements in his swing. His plate discipline is looking much improved and he is essentially swinging at better pitches giving himself a better chance at good results. Pitchers will adjust and his luck will slow, but still he will be a useful bat.