The Fantasy Baseball Hall of Fame in conjunction with Razzball.com, are electing the All-Star teams of the Fantasy Era. For every season from 1980 to today full 23 man rosters will be created and analyzed. In the second installment the 2001 through 2003 seasons are identified.

2001 was the last hurrah for the fantasy all-stars. During the 1980’s no team reached the level of 10 Fantasy Baseball Hall of Famers on its roster. In the early 1990’s, the number FBHOF’ers per team rose steadily until maxing out at 14 in 1997 and 1998, and maintained this approximate level for the next three years. Now, in 2001, we find it’s the last team to take the field with double digit home FBHOF’ers.

Several all time greats made their last All-Star appearance: Roberto Alomar, Kevin Brown, Chipper Jones, Greg Maddux, and Larry Walker had their last great season and only the addition of Albert Pujols helped off-set their losses.

Randy Johnson, with 17.9 FBHOF points, made up for what was otherwise a mediocre starting rotation. He won 21 games and struck out 372 batters, the third highest mark since the beginning of the 20th century.

In a famous 7 game set, the Arizona Diamondbacks defeated the New York Yankees in the 2001 World Series. Gonzalez, Johnson, and Schilling represented the victors. Mike Mussina and Mariano Rivera the losers. 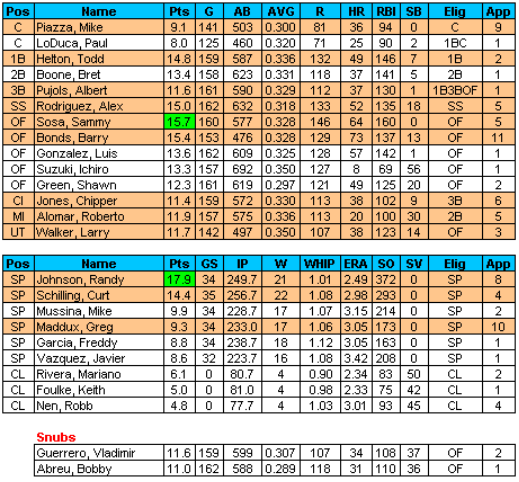 No stars, no problem.

14 first time All-Stars make up a large portion of the 2002 squad, yet this team was among the best of the fantasy era, ranking 6th overall. The key for was their formidable starting rotation, led by another great season from Randy Johnson. He owns the best consecutive two year score all time, compiling 36 FBHOF points in 2001 ad 2002. Fellow starters Curt Schilling and Pedro Martinez were excellent as well, combining for 43 W, 555 K, 0.96 WHIP, and a 2.81 ERA.

Saying goodbye were Mike Piazza and Sammy Sosa. In 2002 the Anaheim Angels edged out the San Francisco Giants 4 games to 3 in the World Series. Barry Bonds was the lone representative for the fantasy all-stars. 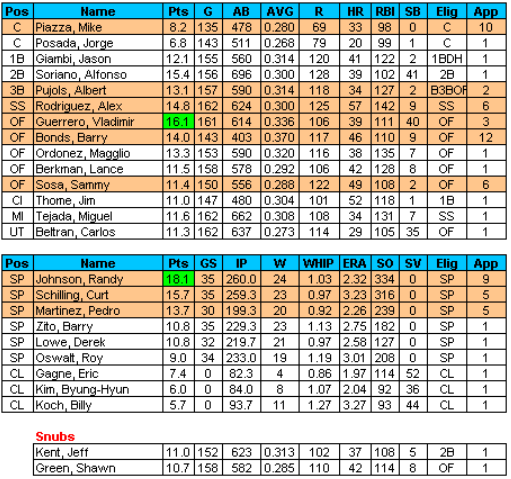 This was a solid year, with all positions with the exception of starting pitcher, solidly above average. The most impressive aspect of the 2003 team was the relief corps, which ranked 5th. This is the best ranking given to closers since the days of 120 inning seasons from the early 1980’s.

Albert Pujols was rated best on the team. It was his finest fantasy season as he raised his batting average to .359 while maintaining his usual run production numbers, in this case 137 R, 43 HR, and 124 RBI. Gary Sheffield gets little credit when compared to his contemporaries, but he could mash. His .330 AVG with 126 R, 39 HR, 132 RBI, and 18 SB added up to 15.9 FBHOF points, second most on the team.

The Florida Marlins defeated the New York Yankees in six games. Florida had no fantasy All Stars; the Yanks had one, Alfonso Soriano. 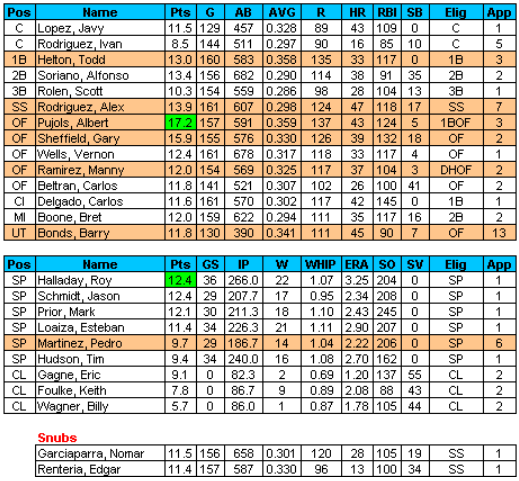