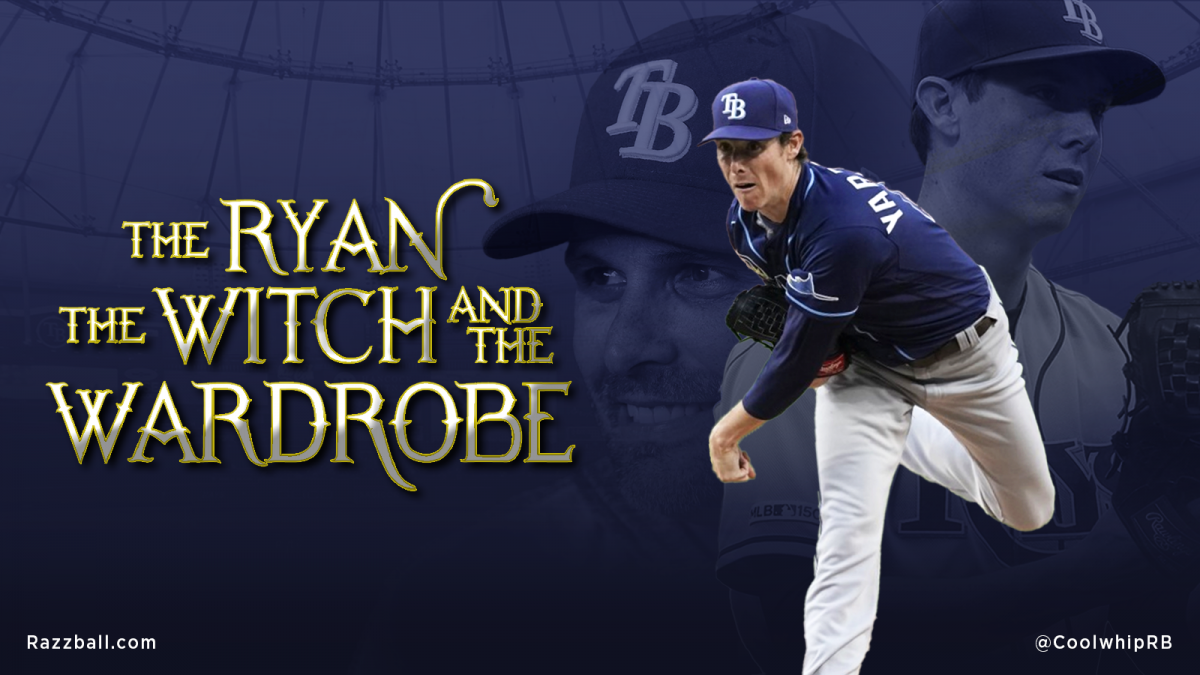 Far away in the land of Narnia, or in this, Tampa Bay, there lies a team still with unreleased potential. Be it a case of service clock or mathematic formula, the new regime of statistics rules these lands with an icy cold grip. It has served its purpose in recent years, and yet, also failed its master in his hour of most need this last October. Some players cannot be so easily quantified. Their measure of quality stretches beyond reason and ‘rithmetic. The new magic of formula does not always explain the world as it is. Enter one, Ryan Yarbrough. Ryan is a pitcher of unique talents for this modern era; but nothing quite new, as they are skills of the past, the old magic. Pitching with command and deception.

Ryan Yarbrough has been under-the-radar until recently, and yet he is still underappreciated. Yarbrough is a lefty pitcher with plus command… maybe even plus-plus command. As a member of the Rays, his innings have been managed thus far. And his starts, for better or worse, have been squeezed through the use of openers and early hooks during the third time through opposing lineups as we saw with Blake Snell in the World Series.

But I’m here to tell you that he is more than meets the eye beyond the lower K-rate. Ryan is a lion about to take a step forward.

Yarbrough is a command artist, which is a nice way of saying he doesn’t strike out batters at a high clip, but also doesn’t walk many batters either. With a K-rate that hovers has hovered in the 19-21% range in his first 3 MLB seasons, that puts him in the company of other commanders like Dallas Keuchel and Kyle Hendricks.

In Tampa, Cash is Queen. For Ryan, Cash rules everything around him. It is the malevolent evil putting his world on ice. Kevin Cash prior to 2020 used the opener to an excruciating (word-of-the-day) degree the last few seasons and, as stated above, his proclivity (word-of-the-day #2!) to relying heavily on metrics regarding third-time-through-the-order statistics. Thus far, this has diminished Ryan’s output and opportunity to build up innings. Kevin Cash is the White Witch, icing his pitchers and often capping their value. But perhaps the thaw is coming.

The best part of it is, he is an efficient pitcher, the average plate appearance the last 3 seasons have all been under 4 pitches, and has trended down. Once the kid-gloves are removed he should be able to consistently go deep into games and be a workhorse. Though, that depends on Cash. Yarbrough will likely be featured in a full-time role in the rotation, but the air of limited innings clings like frost to the landscape of this approaching season. The positive being, it looms large for nearly every team.

Though he is persecuted by the White Witch, the magic is that Ryan continues to improve. Piercing the veil, we see that despite his limited starts he continues to grow. Deeper and deeper we dive into his underlying numbers, we find more to like hidden by his unassuming strikeouts. When we look at the batted ball profile against him, we see a tale of year-over-year gains in reducing effective contact. The GB/FB has increased in his favor, FB-rate has declined, exit velocity has declined, average launch angle has declined, barrel-rate has declined, and hard hit-rate has declined. In nearly all of the contact metrics, he is improving; this is what player growth looks like, and he is asserting himself more on the mound.

Moving to plate discipline, the story persists. Each season better than the last in the lion’s share of metrics. He continues to reduce zone contact while increasing opponent Chase%, First pitch strike%, Swing% and Whiff%. Batters are becoming more uncomfortable in the box against him despite his lack of dominant velocity. He’s able to work quick counts because of his stellar command and a deceptive arm slot. What does that look like you might ask?

Here is him dropping in a change on the corner just out of reach in the shadow (where Gurriel’s scouting report says he’s vulnerable):

Here is Yarbrough painting that same corner with a Curveball:

Ryan Yarbrough’s unusual arm slot adds some mystique to the angle and spin of the pitches, and that extra wringle makes it a bit harder for batters to pick up the pitch. That extra fraction of a second is huge, and is the key to his edge. Yarbough is on the cusp of breaking out in a big way. He just needs opportunity (he has the rotation spot now) and Cash to free him from bondage. In the final month Yarbrough only allowed 3 BBs in 25.1 IP versus 9 BBs in 30.1 IP prior which led to an ERA of 2.49 in September. One thing I’m learning is that the ERA predictors/projectors aren’t able to properly account for pitchers that do a superb job of mitigating hard contact and limiting free passes like Yarbrough.

Yarbrough’s current ADP on NFC is 256.95, and that late in the draft makes him an excellent value to be a ratio stabilizer for a volatile pitching staff that is already stacked with Ks in need of some balance late in the draft. Ryan is one leap away from being the next Keuchel or Hendricks. For this season I’ll give him a projection of 3.69/1.16/160 IP/136 Ks with a chance for more. Any improvements in his walk-rate or K-rate will compound to the rest of his stats due to his command. This Ryan is ready to Roar.