There are a number of bets you can make throughout any sports’ season. Besides wagering on individual game odds or player prop bets, you can bet on more general outcomes. One is to wager on future results such as which team will win the league title.

Since we’re just over one month into the MLB season, betting on a team to win it all is one type of futures bet. Early in the season is when individual team odds can be very appealing. Here is a look at FanDuel’s sportsbook odds of winning the 2019 World Series.

Futures are bets made with the outcome pending in the distant future. Betting early game lines are somewhat like futures. In reality, anytime you post a bet more than a few days before the actual contest, it might be deemed betting on a future outcome.

However, the idea of betting futures, as it pertains to season outcomes, is what we’re talking about here. There are different types of futures bets on the FanDuel sportsbook. You can take the odds as early as during the preseason, long before the first tip-off, kickoff, or pitch is thrown.

Odds for future betting can be standard, like 10 to 1, or based on a plus amount if you win, such as +550. There are odds posted for division winners and conference champions. A common futures bet is to pick which team will ultimately be that year’s league champion.

Futures are wagers made using the posted odds for any given team to win the title, or a particular event to happen in the future. There are over/under bets on points scored, player performances, or other individual game outcomes. However, the most popular futures bets are picking who will win the league crown.

When Should you Make a Futures Bet?

The odds change as the season goes on. Usually the odds for the top-rated teams will change only slightly. Injuries and other factors such as underachieving performance can drop the odds for teams whose prospects of winning-it-all diminish as the schedule unfolds.

Prior to the beginning of the official season is the best time to get the best odds. This is even more helpful for bets on any team you perceive as a dark horse. The early favorites will present profitable odds themselves.

Since both odds can change as the season unfolds, the best suggestion for betting season-long outcome projections, is before the first game or as early as possible thereafter. As things unfold, the oddsmakers will adjust.

Are There any Strategies for Futures Betting?

Gaining an edge when making a true futures bet is always the idea, but akin to telling the future using a crystal ball. Sure, some team’s odds of making it all the way through the season and league playoffs are greater than others, but trying to pick from more than two dozen teams is a challenge.

The first strategy is to begin by erasing all teams that you feel are a lost cause. While they will have odds available to win the title, you know full well that they are going to struggle. Remove those teams from your list first. The next step is where you begin to apply your own hunches.

If you feel the highest ranked team in the league is going to win it all, bet on them. There are going to be other teams listed as highly probable champions as well. This is where your strongest hunches can pay off. Now, what if you think a team other than the one from the top-tier is going to pull a surprise?

Bet them, of course. As a safeguard against losing all your money on a dark horse, bet a small wager on the highest rated favorite as well. At least when the confetti is being tossed about the winning locker room, you won’t be left with nothing but the memory of a strong hunch.

With less than 20-percent of the schedule completed, betting on who will ultimately hoist the World Series trophy falls under the category of a futures bet. 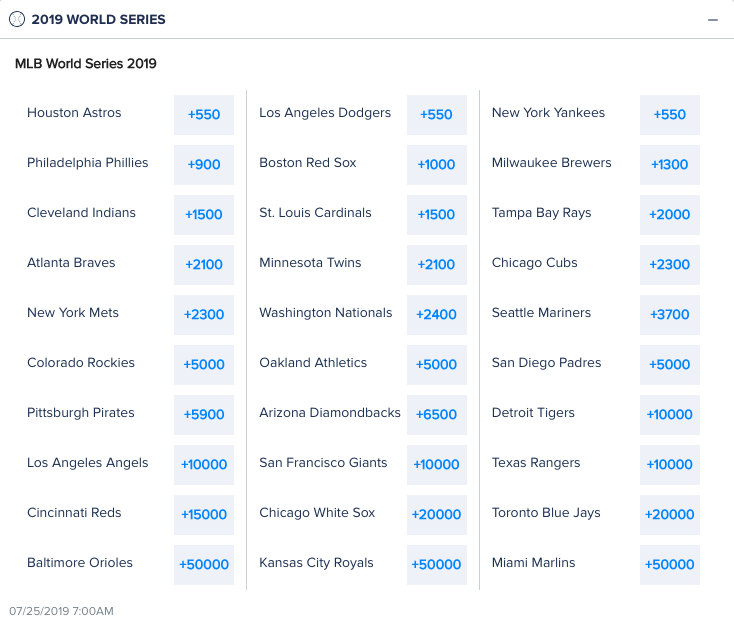 The odds for each team to win this year’s MLB World Series are scattered. Even the defending champions,  don’t have the highest odds of winning it all. The Boston Red Sox are currently at +1,000 on FanDuel’s sportsbook, a full 100 higher than the fourth most probable team the Phillies.

The top three are currently all even. New York, Houston and Los Angeles are all at +550. However, the Yankees and Astros can’t even both make the Fall Classic. In Los Angeles, the Dodgers will be trying to turn the tables on the old adage, “third time is a charm”.

LA will need to win their third consecutive National League Pennant to even make it to the World Series. While the Dodgers are good, some wonder if they’re truly that good. That immediately makes the +900 futures odds attached to the star-loaded Philadelphia Phillies very enticing.

After Boston’s fifth place rank come the Milwaukee Brewers, one game away from supplanting the Dodger’s last season as the NL rep in the final seven game battle for baseball’s ultimate prize. Cleveland overturned their lineup, and philosophy, but they still earn a respectful +1,500.

The consistency of the St. Louis Cardinals earn them a matching number. All three of the top rated NL teams currently lead their divisions. In the American League, Houston has started well, and the Indians are finding balance after a slow start. However, there is a dark horse emerging in the Al East.

Both the Yankees and Red Sox are still popular picks to win the MLB title. The Yanks have survived a host of injuries to be four-games over .500. Knowing how badly they’ve been hit by the injury bug may be a sign of how strong this team really is. But don’t look past the pitching strength of the current dark horse.

The Tampa Bay Rays are back to being like the Rays of old. Kevin Cash’s team is devilishly pesky, and usually difficult to beat at their home dome. Funny stat, however, Tampa Bay is a stellar 10-2 away from Tropicana Field. The Rays have legged their way out to the best record in baseball after the first month.

Of all the underdogs to win the World Series, the Rays may be the most interesting as a futures bet. They lead a mishmash of middle range teams between +2,000 and +2,400. This list includes the Atlanta Braves, Minnesota Twins, Chicago Cubs, New York Mets and Washington Nationals.

The Twins currently lead the AL Central with Cleveland on their heels. Two teams currently playing well are Arizona and San Diego. Both are back of the Dodgers, but the Padres are a +5,000 with the Diamondbacks getting a +6,500 chance of winning the World Series.

As you venture down the list, the likelihood of the rest of the teams winning it all become close to slim to none. So, a nice way to approach betting the MLB futures for this year’s World Series champ might be to use the combo strategy. Pick your first hunch from the trio of lead horses, then put a bet down on one of the underdogs.

Even if you agree that the highest rated team, the one with the lowest projected profit, you win if they hoist the trophy. Futures can be a way to make the entire season a little more exciting. However, if you only pick one team, and that team fades early, it will erase all that excitement. It’s sort of like putting all your eggs in one basket.

One solution to helping prevent that problem from happening is to bet on at least a couple teams. Take a pair of the higher ranked odds, and then blend in your favorite underdog.

If you’re interested (if you’ve made it this far, you must be interested), here are odds to win the divisions. 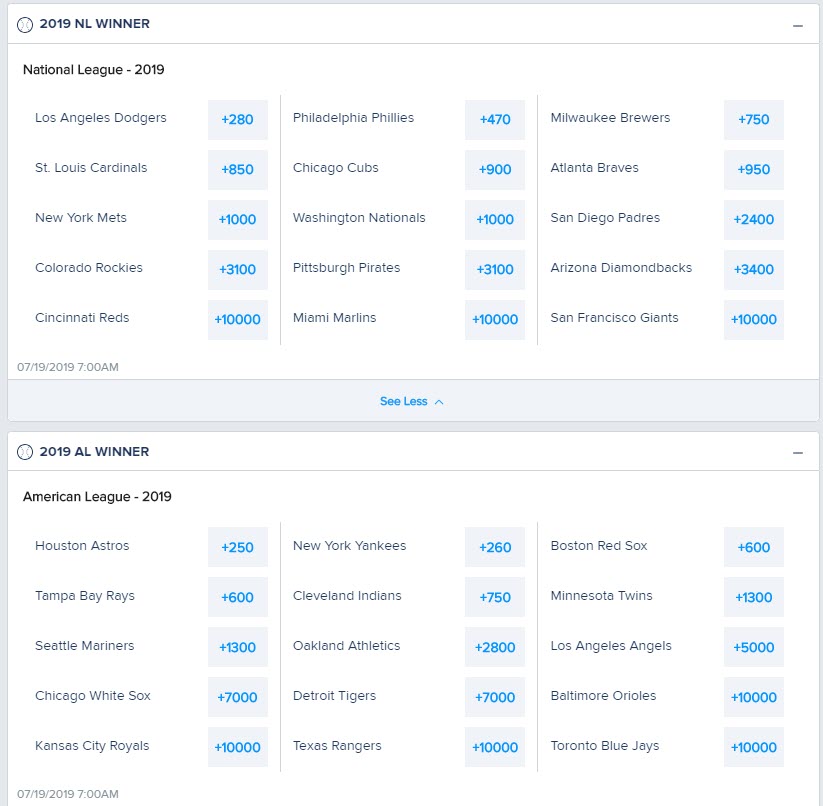