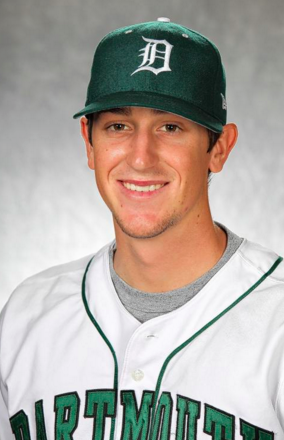 Just look at him. Smiling. Slender. Smart. Coming in at a 190LBs while standing a svelte 6’3″ if you gave this man some wispy eyebrows, a cardigan and a pipe you’d have yourself a run-of-the-mill ivy league professor. In the greens of Dartmouth’s baseball team, though, you get Kyle Hendricks, the unbecoming, unannounced, unheralded almost ace of the MLB-best Chicago Cubs. Could it really be this dude that plays a massive role in reversing the Cubbies curse? In a word:

Seriously, Hendricks may be nicknamed ‘The Professor’ because he went to Dartmouth (not because he could pass for one), but what he’s done on the mound lately mirrors more Greg Maddux than Albus Dumbledore. Not only do Maddux and Hendricks share a nickname, but they also put together spurts for the Cubs that were Cy Young worthy (to be clear, Hendricks ain’t winning the Cy Young, and he’s no Greg Maddux). Let’s compare the two of the top Cubs pitchers this year:

And just whom might whom be? Player A: Kyle Hendricks. Player B: Jake Arrieta. They’re both below. They both deserve to be there. Just under the Norse god himself. One’s the reigning Cy Young candidate. The other is a Dartmouth grad. Don’t worry about the name value on Hendricks, he’s been a sneaky top 20 pitcher all year. Those damn Dartmouthians(?).

Pitchers are listed in order by rank. Colors represent worst 8 or best 8 opponents according to team wOBA for last 14 days.

THE BEST –  Yep, just three at the top, and don’t worry, it doesn’t get bloated in the middle. Nope, this week’s full of poor options, but these three would be at the top in any week. And yes, that includes you aforementioned Kyle Hendricks. He’s been nothing short of remarkable.

THE REPLICAS – I’m not afraid of Pomeranz at all, even after Bill Simmons and the rest of the Masshole world lost their minds when he failed to go 4 IP in his first start as a member of the Red Sox. And for the record, I’m a yuge Bill Simmons fan, so don’t think otherwise. Also not thinking otherwise? That Pomeranz will all of a sudden suck. He’s been great, and will continue to do so, even if he doesn’t escape the 7th inning often. I also love what Pineda has done recently, along with Verlander. Keuchel’s creepin back into my good graces. Bout effing time.

THE STANDARDS – Not loving any of these this week, but they’re still worthy of putting in the lineup over any mediocre one start option.

THE KNOCKOFFS – Ervin ‘Smell Baseball’ Santana has been sneaky good the past 6 weeks. I still wouldn’t rely on him, though. This tier is just barely above the poop for the sole reason of matchups, name value and potential. Gold plated turds, they’re called.

– For this week that emoji is especially prudent. Shields could slide into the tier above, but the Twins have surprisingly hit well the pas month. All the rest…Blegh.

All players listed are projected for two starts, and this list is subject to changes after the article is posted.

Somehow Hendricks still isn’t owned universally. If he’s, by some chance, available in your league, well…you’re not the brightest of the bunch. Freaking get him. For everyone else: here’s your sneaky trade deadline target. And now I have no chance of getting him in my RCL’s.

Here’s to hoping he continues pitching like the O.P. (Original Professor), Greg Maddux, and mirrors Arrieta in Week 17. As for the rest, if they’re under tier 2.5, just keep it movin’.

Skaggs is getting called up and I think he has two starts next week if he stays. Where would you put him? Thanks.

@Siren Vogelsong: I’ve been a closet Skaggs fan for three years running. He seems to have great upside, and his numbers in the minors this year have been stellar. I’m always hesitant on the prospects when they first come up, tho. Yes, Skaggs has been there before, but I’ll lean on the conservative side for week one and put him right above Gio. That Boston matchup, if he pulls them, could be death.

What Would Dykstra Do?

[email protected]
Reply to  What Would Dykstra Do?

@What Would Dykstra Do?: I love the Hendricks add as a possibility, but you might think about moving a hot Franco for the best SP available since you have Donaldson and Arenado, and can slot in a hot bat to UTIL. Try Franco for any of those names (doubt you can get Lester with that). And push come to shove Ozuna for Hendricks is a good deal for your squad. You have plenty of hitting it looks like.

What Would Dykstra Do?
Reply to  [email protected]

@[email protected]: Thanks [email protected], that makes sense. I was leaning on hitting all year, because of how volatile the pitching has been. But, i think i need one more reliable pitcher for the playoffs and Ozuna oe Franco seem to be the most expendable.

[email protected]
Reply to  What Would Dykstra Do?

@What Would Dykstra Do?: Yessir! Hope it works for you!

My efforts to trade for an ace have been unsuccessful. I’ve got fulmer and Velasquez on my team. I’m happy with their performance, but worried down the stretch with their innings capped. I’m hoping to add an arm or two as an insurance policy.

Thoughts on me offering cespedes for the likes of Happ and rorak? Instead of reaching for the stars, perhaps try and snag a couple consistent arms instead. Fair deal, or am i giving too much? I’ve got plenty of depth at OF and HR that it wouldn’t be a big loss loosing his bat.

@Mike Schenk: Still giving up too much. If you give up Yoenis, you need to prepare in getting an Ace in return. While Roark and Happ have been solid, that’s selling low, way low. The market should say you an get more. And if not, then give up less to get those guys. Scary but those innings caps dampen their ROS value.

ThE sHiT
Reply to  Mike Schenk

@Mike Schenk: FWIW, I traded Fulmer/Shark for Greinke to a somewhat savvy owner in hopes Greinke at least is decent when he comes back for the stretch run. Fulmer/VV will not net you an ace, maybe a middling #2 at best.

Mike
Reply to  ThE sHiT

@ThE sHiT: Fulmer or Velasquez would be included with Cespedes in my offer.

I was scanning the waiver wire and saw hellickson is available. I’m thinking about dropping vinnie to pick him up instead of trading.

@Mike: I get the oh so humble man’s comment about getting Greinke, but for you I would hold onto VV until he gets closer to shutting down. No reason to jump ship early if you’re not trading him. Other streaming options will be there once he’s done.