This week I am going to change things up a bit and focus on two of the top prospects entering this season – Bobby Witt Jr. and Oneil Cruz. Both players have been on the radar of dynasty owners for years, and this season we are finally getting the chance to watch them play every day.

Witt has been a top prospect since being drafted by the Kansas City Royals in 2019 and entered this season ranked as the third best prospect by Baseball America (BA) and the top prospect by MLB and Baseball Prospectus (BP).

The left-handed hitting Cruz entered the year as the 14th best prospect by BA, 26th by MLB and 12th by BP. Pittsburgh gave us a very small peak of what Cruz could do last season when he played in two games for the Pirates and went 3-for-9 with a homer. After starting the year in the minors, the Pirates finally brought him up to the show in June and he has been a mainstay in the lineup.

Since his days in high school, Witt has stood above the crowd. As a teen, Witt was already proficient at driving the ball to all fields and consistently barreling the ball. And there isn’t just one area where Witt is just average, at least according to the scouts who gave him the following grades: Hit: 60 | Power: 60 | Run: 60 | Arm: 60 | Field: 60 | Overall: 65.

Witt has proven the scouts to be correct. As a 19-year-old in the Arizona League, he drove in 27 runs in 37 games. While he didn’t play in a game in 2020 due to COVID, he excelled at the alternate training site. So in 2021, he skipped A ball and instead spent his time at Double-A and Triple-A where he proceeded to hit 33 homers, drive in 97, and swipe 29 baes in 124 combined games.

Thankfully, the Royals didn’t play games with Witt and let him linger in the minors for a few weeks to try to manipulate his service time and instead have had him on the roster since Opening Day. Now with more than 100 games under his belt with the Royals, Witt is slashing .254/.297/.440 with 15 homers, 57 RBI and 22 steals. It is this power-speed combination that has so many fantasy owners (the Royals fans) drooling over Witt’s play on the field.

As mentioned earlier, there are not a lot of holes in Witt’s game. As you can see in the chart above, his average exit velocity ranks in the 77th percentile, his max EV ranks 92 and his sprint speed is at the top of the chart. He has been hitting the ball to all fields this season, though all but two of his homers have been to left and left-center field. However, as he gains more strength and grows into his frame, those doubles and triples to right field will become homers.

The Los Angeles Dodgers are an excellent baseball team, but when it comes to trading for relievers, perhaps they should just not do it. The same team that traded Yordan Alvarez to the Astros for Josh Fields at the 2016 trade deadline also traded Cruz to the Pirates for Tony Watson at the 2017 trade deadline.

Cruz is very different from Witt as he stands 6-foot-7 compared to the 6-foot-1 Witt. But don’t let the massive size fool you as Cruz is an above average runner as seen by his 71 career steals in the minors. His sprint speed with the Pirates this season currently ranks in the 99th percentile. 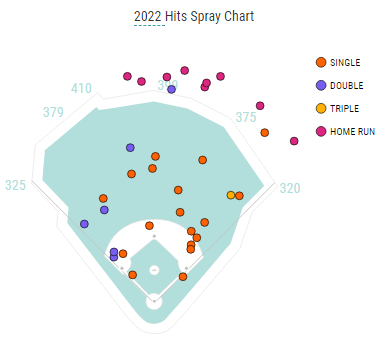 While Cruz can steal some bases, that is not his game. What scouts love about Cruz is his raw power. His average EV in 2019 in the minors was 92.4 mph. But that is the minors, what about in the majors? Well, in his brief career his average EV is 90.9 mph and his hard hit percentage is 45.3% compared to the major league average of 38.7%. His max EV this season is 118.4 mph!

And that power isn’t just to the pull side. A host of his homers have been hit to center field or right-center, as you can see above. While he is not utilizing the opposite field much, he has shown the ability to go the other way.

Every rookie has to make adjustments. For Cruz, it is cutting down on his strikeouts. He entered Saturday with 61 strikeouts in 173 plate appearances for a strikeout percentage of 35.3%. And his strikeout rate is actually getting worse as each month passes. It was 31.8% in June, increased to 35.9% in July and is currently at 37.5% this month. The problem is his inability to hit the breaking pitch.

Look at the chart above. Cruz is hitting the fastball and the offspeed pitch to the tune of .259 and .241. But the breaking pitch is his kryptonite at this moment. His whiff percentage is 62.8 with a .118 slugging percentage. In 51 at-bats, he has 31 strikeouts.

The high strikeout percentage is also paired with a low walk percentage. It currently sits at 6.4%. The good news here is that his walk percentage has increased dramatically this month. In June and July it was at 4.5% and 4.4%. In August, Cruz is walking at a 12.5% rate.

When it comes to Witt and Cruz, the verdict on whether these two players are keepers or not is obviously yes. If you don’t have one of these two players on your team but find a trading partner to add one, I would do it in a heartbeat.

Overall I like Witt a little more. He may not have the same raw power Cruz has, but Witt makes a lot more contact which will help more with the counting stats as well as the slash line. And Witt is a much more aggressive runner on the bases and will provide you with a lot more steals. So if you have to make a choice between Witt and Cruz, I would go with Witt. But if the consolation prize is Cruz, I wouldn’t be too upset.

Freeze Cruz and trade Witt for a ransom.

Straight up, of course, I’d freeze Witt. But the value you get from Cruz at 17 is outstanding. As your keep players, do their rounds change (like will Cruz become a 15th round pick, then 13th round, etc.? Because if they move higher up the draft ladder, then it really makes more sense to keep Cruz.

If they maintain the same value every year, I’d actually be tempted to keep Witt – mostly due to the steals he will add.

Hope that helps a little, and thanks for reading.

Unfortunately, I can’t trade Witt as we are past trade deadline and any players not kept, go back to the pool to help keep the draft interesting every year.

Our rounds do not change nor is there a kap on how long you can keep a player. I’ve had Machado since the days of trading Josh Rutledge to get him :) – Love the 17th round value for Cruz, but that big hole in his swing vs what I’m seeing out of Witt potential has me conflicted. Pairing Witt, Franco, Bichette together for the next decade is what I’m getting dreamy about. Just curious about Cruz power/speed combo as well in the 17th.

Keep up the great work!

With the rounds locked in, I’d likely keep Witt, then. He’s going to help in more categories overall, especially speed. As you said above, that combo is amazing.