Welcome to another edition of Top Dynasty Keepers.

We’ve taken a look at some of the top prospects who have been promoted to the Show the last couple of weeks. So this week, we are going to take a look at two players who are not on the popular top prospects lists in Luis Gonzalez of the Giants and Christopher Morel of the Cubs.

After two cups of coffee with the White Sox in 2020 and 2021, the White Sox let go of Gonzalez and the Giants claimed Gonzalez off waivers, only to later release him prior to the non-tender deadline. San Francisco then inked him to a minor league contract in December. Meanwhile, Morel, who is listed as the Cubs’ No. 21 prospect by MLB Pipeline entering the season, has finally made it to the majors after signing a contract with the Cubs in 2015.

Are these fantasy owners right in shying away from these two players? Let’s take a look at their numbers and find out.

If anyone said they expected Gonzalez to be hitting better than .300 in June, they would be lying – especially when you look at his career minor league numbers in which he slashed .267/.347/.418 in 362 career games.

After starting the season in the minors, where Gonzalez was slashing .286/.397/.551 with four homers and eight RBI in 12 games, he was recalled by the Giants and has become one of the team’s better hitters while playing all three outfield spots (and making three appearances on the mound).

SO, WHY THE SUCCESS?

Gonzalez is not a home run hitter and doesn’t pretend to be. He has some pop, but his game is making contact and slapping the ball all over the field. His career strikeout percentage in 19.6% in the majors and 18.7% in the minors. Look at his 2022 MLB Percentile Rankings and you will see he ranks well in K% and Whiff% as well as sprint speed.

Looking at his spray chart, Gonzalez, who hits left-handed, has as many doubles to the opposite field as he does to the pull field. And he uses his speed to beat out a lot of ground balls in the infield. 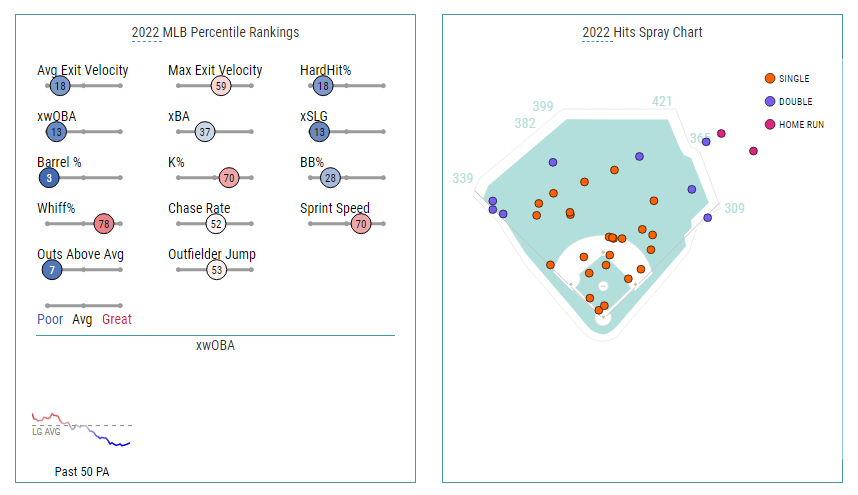 The Cubs discovered Morel in the Dominican Republic and signed him in 2015 for $800,000. But Morel didn’t make his professional debut until 2017 due to a household accident that resulted in him cutting his right arm. Since his first season in Rookie ball, he has quickly moved through the Cubs’ system and spilt time between Double A and Triple A last year.

Morel has not put up great hitting numbers during his minor league career, slashing .242/.313/.413. But he does have speed and he can play all over the field. So far with Chicago, he has played second base, shortstop, third base, and center field.

A LITTLE OF EVERYTHING 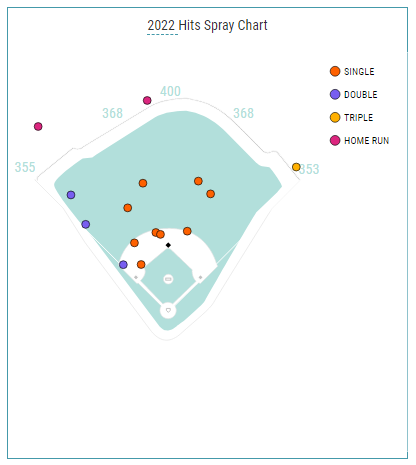 Unlike Gonzalez, Morel has a more versatile game. Like Gonzalez, he can steal a base as he already has six with the cubs and swiped 18 last season in the minors. Unlike Gonzalez, Morel can hit the ball out of the park. He generates a lot of bat speed, generating an EV of 91.2 mph during his brief time with the Cubs with a 43.8 hard hit percentage. And while it doesn’t matter in fantasy baseball, Morel has a great arm and above average range in the field, which is why he is getting a lot of time in center field.

A LITTLE TOO AGGRESSIVE

An area Morel needs to work on is trying to be less home run happy and just let his natural power play out on the field. While he can hit a fastball, posting a .341 average with three doubles, a triple, and two homers against that pitch, he overswings too much against other pitchers.

So, as mentioned above, Gonzalez and Morel are not exactly burning up the waiver wire. Gonzalez is not getting a lot of love, and I have to side with the majority of fantasy owners who are not adding him to their roster.

Gonzalez is off to a nice start, but his career numbers say this .300+ batting average is not going to last. Even if Gonzalez does remain a .300 hitter, he is not going to provide you with too much else other than a few steals and the occasional home run. While he is a great IL add and filler for an outfielder who has a day off, I wouldn’t go out of may to add Gonzalez thinking he is a great keeper.

Morel is a little harder to judge. He can hit for power and steal a base, two attributes fantasy owners love. Is he a top dynasty keeper? Depends on your league.

In leagues with limited keepers, you either have to be rebuilding or not have a lot of surefire keepers to make room for Morel right now. If you are in a league that allows for tons of keepers, I think Morel is worth taking a chance on. As I mentioned, he already has six steals entering play on Saturday. He still strikes out a lot, but that is par for the course in today’s game. I don’t think Morel is a slam dunk keeper, but if you have some underperforming players, one of them is worth dumping in exchange for Morel.

Thanks for the hard work Jakkers!

In AL-only keeper, was offered Brujan for Bello. Thoughts? Obviously one guy’s stock is falling while the other’s is on the rise. Both are keepable for four years after this year. I’m a Sox fan so really excited by Bello and my initial reaction is to reject the offer but was wondering if you had thoughts on Brujan’s poor performance/possible rebound. Also, let me know how close you think it is–I’m going for it this year so may ask for a piece like Kike Hernandez.

What’s up Mookie? Thanks for reading.

Now, to the question at hand, I have always stated my bias toward prospects who are position players compared to pitchers. Rookie pitchers have their moments, but they have so many ups and downs. That said, Bello is putting up nasty number down on the farm. That K/IP rate is sick. But if he gets called up by the Sox, I think he will see more time in the pen this year before making the transition to the starting rotation. It’s what the Sox did to Whitlock.

I think Brujan has been hurt by the Rays and their decision to move him around the field. Not only does he have to worry about hitting, but also getting use to right field, or second base, or shortstop. I’m concerned about his 51.7% ground ball rate, but he only has a 14.7% K rate – so he is not getting totally overmatched.

When it comes to fantasy, sometimes you have to be a homer. My team is the Astros and I always have a host of them on my teams or in my system. For you, Bello would be tough to lose and I think he will be a stud on the mound – but it may not be this year.

Straight up, I could easily justify saying thanks, but no thanks as Brujan will likely not be a huge help to you offensively this year. If you get an additional player who can help you, however, then I would make that trade as you get help this year and help for the future.

Thanks for the great reply! Appreciate it!

Good read Jakkers! What’s your take on Vosler? Who do you like better ROS, Vosler or Yepez? Thanks.

Vosler I’d having a nice little run, but I think what he showed last year is who he really is. I’m all aboard the Yepez train, for the rest of this year and of course beyond.

I like his power more and he won’t be expected to carry the offense in St. Louis, so he can just be himself and produce.