Welcome back to another week of Top Dynasty Keepers.

If you have been a regular reader of this column throughout the season, then you know I have focused on a wide variety of players – from the hot-shot prospects to the players who have flown under the radar as prospects and perhaps throughout this season.

This week I want to highlight a player who falls into the “under the radar” category. That player is Jake McCarthy of the Arizona Diamondbacks.

McCarthy is not one of those players who was drafted toward the end of the draft and slowly made his way through the minor league system before getting his shot in the majors. However, he is not a player who everyone was waiting for him to get his chance so they can try to pounce and add them to their roster.

A left-hander who can play all three positions in the outfield, he was never close to being a top 100 prospect. In fact, McCarthy wasn’t even a top 10 prospect with the Diamondbacks entering the season. But that is why prospect lists are only one tool to use when evaluating players. Raw tools are great, but so too are desire and basic talent.

McCarthy doesn’t hit for a lot of power, but he is strong enough to not hurt you in the power department. He also doesn’t have elite speed, but he is above average and, coupled with his ability to get great jumps, he is a great base stealer.

Despite his lack of eye-popping tools, McCarthy has turned himself into a regular for the Diamondbacks. So let’s take a deeper look into the Arizona outfielder.

McCarthy was enough of a prospect in high school to garner attention in the 2015 draft as the Pirates drafted him in the 23rd round. McCarthy chose not to sign, instead going to play for the University of Virginia. It was with the Cavaliers that McCarthy first showed the type of player he was going to be with the Diamondbacks.

In 338 career NCAA at-bats, he hit only five homers. But McCarthy wasn’t recruited to hit home runs. He was at Virginia to set the table and he did that well. He stole 36 bases during his three seasons at Virginia while slashing .337/.423/.476. The Diamondbacks were obviously impressed with what McCarthy could do as they drafted him in the first round of the 2018 draft.

After signing with Arizona, McCarthy had a solid professional debut to conclude his 2018 campaign, slashing .288/.375/.443 with an impressive 21 steals in 58 games. His 2019 season was a little hit and miss as injuries limited him to only 53 games.

But when on the field he did what he has done throughout his career – steal bases and get on base as he swiped 18 bags and had a .341 OBP.

McCarthy spent the 2020 season at the team’s alternate training site and showed up with 15 extra pounds of muscle, allowing him to fill out his 6-foot-2 frame a little more. That extra muscle has led to extra power while not slowing him down on the base paths.

During stops at Double-A and Triple-A in 2021, McCarthy hit a career-high 15 homers while stealing 29 bases. His batting average took a dip, dropping to .253, but his OBP was still a decent .332. The Diamondbacks were impressed enough to purchase his contract and add him to the major league roster. He appeared in 24 games with Arizona last season, slashing .220/.333/.373 with two home runs, four RBI and three steals.

McCarthy started the season with the Diamondbacks but didn’t impress during the month of April. Perhaps trying too hard to prove he belonged in the majors, McCarthy struggled greatly by slashing .120/.185/.240, going 3-for-25 in 13 games with 12 strikeouts and only two walks.

The Diamondbacks sent McCarthy down to Triple-A Reno on April 25, and McCarthy went to work and quickly regained his form as he slashed .369/.457/.596 with 11 steals as well as five homers in 36 games. After a couple of trips back and forth between Reno and Phoenix, McCarthy has become a regular in the lineup thanks to his consistent hitting since his final recall in July.

McCarthy earned more playing time in August and made the most of it, having the best month of his major league career. Power-wise, he hit three homers and drove in 19 runs in 24 games as he slashed .308/.379/.484 for the month. He also showed off his speed, stealing eight bases in eight attempts. He also maintained his strikeout out rate from July with a 13.4% strikeout rate. 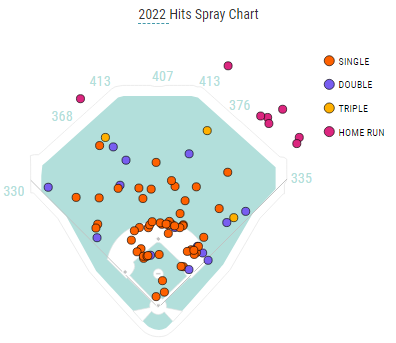 When the left-handed McCarthy connects for a home run, he is going to be pulling the ball as all but one of his home runs have gone to right field. Otherwise, he uses the entire field when hitting. Just look at the spray chart above if you need visual proof.

When you watch McCarthy, he doesn’t overwhelm you with loud hits that make you ooh and ahh. In fact, his average EV this season is 86.7 mph, which is actually below the major league average of 88.1 mph. His line drive percentage is also below the MLB average while his ground ball percentage is nearly five percentage higher than the 42.7% MLB average. And there could be a concern that his average will take a hit as his BABIP of .357 is way above the MLB average of .291.

So, when looking at his advanced stats, McCarthy doesn’t blow you away.

But I am not too worried about those numbers. I don’t expect McCarthy to be a power hitter, so how hard he hits the ball isn’t a concern of mine. He is a line-drive hitter with enough power to produce 10 to 15 homers per year, thanks in large part to the fact he plays at elevation in Arizona.

What McCarthy does well is hit the ball all over the field and steal bases. After striking out way too much in April and May, he has significantly cut down on the strikeouts while also maintaining a league average walk rate. If McCarthy was a pure contact hitter, then he wouldn’t be a keeper candidate.

But the fact he can hit for some power, whether it is homers or doubles, certainly helps his cause. However, what I really like about McCarthy is his base running ability. Some players have great speed but still can’t steal a base. Others, however, are like McCarthy – above average speed with above average ability to read the pitcher.

When McCarthy is on base, he has been great at stealing bases with a 90% success rate this season. During his minor league career, he was successful stealing 81% of the time and he was 36-for-38 stealing in college, a success rate of 94.5 percent. The numbers don’t lie. McCarthy is great at knowing when to run and getting a great jump to lead to outstanding success.

I have added McCarthy in several of my leagues. Whether you play in a traditional fantasy league or a points league, I think McCarthy is a top dynasty keeper.