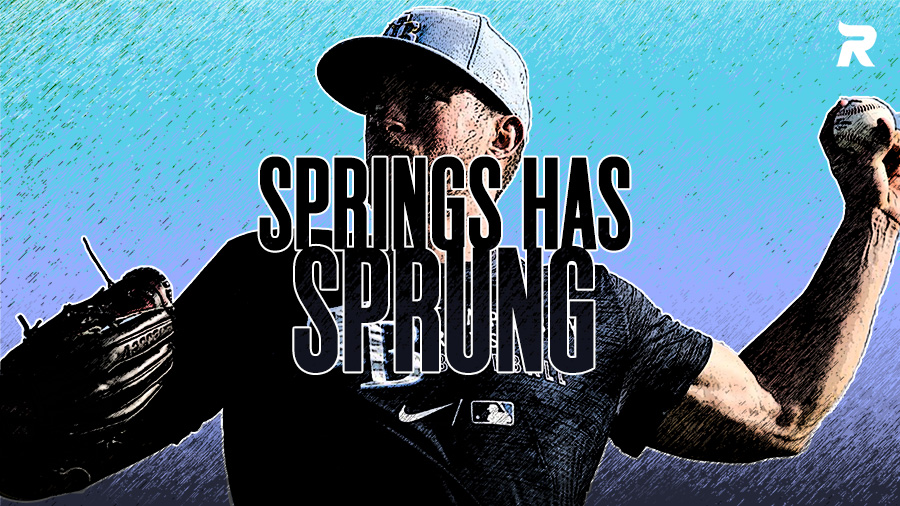 I sat here and debated what to do this week. Leagues are drawing to a close with some in their playoff matchups and others fighting for those last couple weeks of roto points. Do I pull out another suggestion for streaming from my bag (thanks Kremer) or like I alluded to last week, do I simply dive into something fascinating to me that I want to share and find the application at the end? We’re going to go the latter. Jeffrey Springs becoming a bonified starter seemingly overnight has not left my mind since he made the move at the beginning of May. This week he shut down the Blue Jays with a start of 6 IP, 3 Hits, 2 BB, and 5 Ks, and he looked in control the entire start save the 2 walks in the 4th. Has he *pregnant pause* arrived?

I could have written about Springs several times throughout the season but there was always something a bit more pressing on my mind. Finally, though, I have the free space in my head to address what’s been eating at me all season. Another reclamation project for the team of reclamation projects. They did it; the Rays worked their devil magic again. So, where to begin?

First off, let’s begin with the obvious. Prior to this season, Jeffrey Springs hadn’t started games in MLB since 2018, and that was only two. TWO. Fast-forward to now, and he has made 21 starts** this year with an ERA under 2.50 at the ripe old age of 29; color me impressed. Originally he came up with the Rangers, and after 2 thoroughly mediocre showings across 2 seasons, he found his way to Boston in a trade for 1B Sam Travis. That too was largely unsuccessful, but underlying numbers towards the end of the season showed he could be better coupled with an improved strikeout rate.

The Red Sox decided to move on though, DFA’ing him, and then the following day he was acquired by the Rays. Many would have written him off as just an average lefty bullpen arm, but not the Rays. They saw something in him that they liked. That first season in 2021 with them was the potential out of the pen he showed in Boston but with better luck. He put together a 3.43 ERA over 44.2 IP with a 12+ K/9. He proved to be an effective reliever.

Then this year, everything changed. The first official start of the year he had was against the Angels. I remember watching that game and seeing him listed as the starter, thinking, “Kevin Cash has gone back to the opener.” And then I saw him go on to throw four innings. “Okay. They are seriously going to stretch him out, interesting.” He then went on to have a 1.90 ERA for the month of May as a starter. Something was certainly different. For one, he was throwing his changeup A LOT. 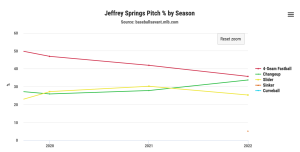 The most change from his 2021 campaign, is just that, his changeup. He’s now throwing it more than ever before. The fastball is being used the least in his career and the secondaries are now thrown more, in more counts, with more confidence. And importantly, batters are getting a lot less hard contact off his secondary pitches compared to years past. This season opponents are only hitting .200 off his slider and .237 off his changeup. What’s different for him this year especially when the slider was hit hard before? Shape. 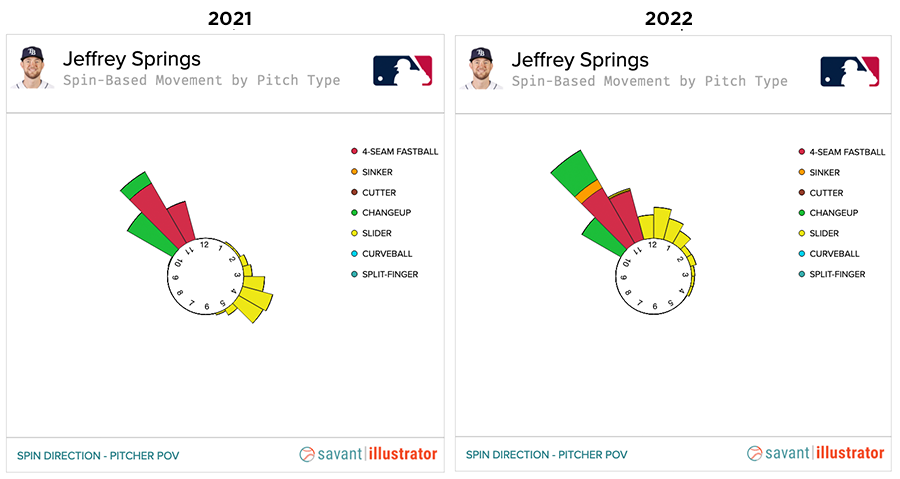 This season, Jeffrey Springs has changed the grips/movement on his secondary pitches. You can see in the spin-based movement diagram that altering the grips on his changeup and slider have added to their deception. The changeup has more gyro spin driving it downward, and the slider spin direction is now much closer to the rest of his pitches. But… the actual movement of them now, is inverse and diverging. This may seem relatively obvious, but you want pitches to do different things, and specifically, behave in diverging ways from each other. Shocking, I know. But it’s true. Some pitchers aren’t able to achieve it, or some don’t have the tools to make it happen. Springs is not one of those.

This season his changeup has gained nearly 7 inches of drop along with another inch or so of run. Now it just disappears off the table compared to his rising fastball. Here is George Springer absolutely lost at sea.

And then there’s his slider. What’s most different about it, is well, not that he added an absurd about of movement to it, but that he took some away. What he did was alter the shape. He has effectively flattened out the slider to the tune of about 10 inches and increased the sweep of it, but only about an inch. Yet it works for him. The key is it moves in a completely different way than his changeup. They essentially flipped shapes so that he can attack righties more effectively while combating lefties better with just his slider.

As you see in the clip, it’s got that horizontal 2-plain movement that the Ray’s love so much. And, it creates a dilemma for the batter. Paired with his fastball, Springs is challenging batters to think vertically and right-to-left. This is typically referred to as North-South and East-West. This is what has made him an effective starter. The ability to challenge batters in both directional planes makes for uneasy at-bats and limiting hard contact. This complementary movement in his pitches has led him to a 29.5% CSW and the best Chase rate of career at 35.4%.

What’s more, he is working the edges of the zone more effectively too with better command. He is targeting the top of the zone more with the fastball and low and away from righties with the change. And low and away from lefties with the slider. All with improved precision. He doesn’t have wipeout pitches, but he commands his pitches extremely well, and knows how to use them in a complementary nature. These heat maps are art: put them in the Louvre.

That’s not even the most interesting part. Jeffrey Springs has reverse splits.

For his career, he does too. Recently he’s learned to shut down lefties better. The changes to the slider have allowed him to trust it more for strikes and the changeup he has more faith in for whiffs, especially to RHB with a k-rate of over 28%. Playing the traditional handedness matchups with him doesn’t work. If managers blindly set lineup cards because he’s a lefty it will backfire.

Lastly, the peripherals on his stats all show that this is sustainable.

With the exception of his LOB% being a little high, everything points to him finishing the season strong and being a good buy candidate for drafts next season in 2023. It’s easy to trust Rays pitchers, and with metrics like these, Jeffrey Springs is the next one to enter the circle of trust. Next Spring, Springs will be on a lot of my draft boards.

Loves it Cool HWhiiiip! Me 2023 draft prep is in full Swiiiing!