What if I told you that with just the click of a button you could have your fantasy lineup set for you. Would you find this idea interesting? If you are 1) sometimes lazy in setting your lineup or 2) interested in the what the logic behind choosing the optimal lineup should be, then hopefully you answered yes to this question. In typical Greysian fashion there is no 3), but I imagine there are people that would fall into a third category as well.

If you find yourself curious about the technical details of how this is done, scroll down because I’m going to save that for the end of the article. What I’d like to jump right into instead, is the algorithm that will determine what the optimal lineup is for a fantasy team, because I think that’s the most interesting and nuanced part of this whole process.

Let’s talk how this program is going to work. Before we can proceed though, you need to know what the league parameters are for the league I’m using to build this program, and also what information we will have available to us to make roster decisions like who to start or sit.

It’s unfortunate, but the truth is there is no standard format for fantasy leagues. Meaning that any program I build will be optimized for one specific type of league and only that type of league. RCL’s do provide a nice standardized format for decently large number of leagues, but sadly they are hosted on ESPN and my program is being built for Yahoo. As a result the league I’ll be using for this project is the Yahoo Friends and Family League, which has a reasonably standard setup.

Some details on its settings are:

While my program will be optimized for this specific league-type, my hope is that what’s learned in optimizing this league will be translatable to other leagues as well.

The information we will use to make roster decisions is:

And that’s it, let’s start figuring out how to figure out the best lineup.

This is a slightly simplifying assumption, because technically if you add a hitter you could drop a pitcher in response. To start though, I’d like to keep the hitting and pitching lineups as two independent processes, since this will make it easier to build a basic framework and isn’t terribly far from the truth anyways. One additional simplifying assumption I’d like to make for now, is to only worry about optimizing a lineup for a single day and not take into account expected future production.

You might be thinking with these two assumptions I’m over-simplifying things, but I’ll think you’ll see that even with these, the process will quickly get complicated enough.

One final step I’d like to take before going into the exact details of how this process will work is to talk strategy. It’s useful to understand the concepts that shape  this task’s solution in order to arrive at the most elegant one.

Reminder, the goal is to determine the best lineup from a list of players. One solution that is guaranteed to work every time, is to simply compare all possible combinations of all players. Every single time this will point towards the optimal lineup, but it’s also an incredibly mindless and inefficient way at getting to the solution.

One strategy I believe is wise to employ is to first seek and execute the moves that, at the point of consideration, are relatively likely to occur regardless of future players considered. In other words, you want to avoid the situation where you have to keep track of lots of possible lineups since you never know how the effect of putting a new player in the lineup will cascade through the down the rest of the lineup. In the process I describe below, you’ll notice certain steps try to take advantage of this by using techniques like “pushing up” players and using positional restrictions to limit the number of best lineups needed to check against.

Without further ado, here is the process I’m proposing for selecting the optimal hitting lineup:

Taking a Step Back

I told you things would get complicated. Anyone who tried to skim through that process probably got nothing out of it and that’s fine, but I think the fun’s in thinking about the small details and strategies involved.

With that said, is what I described above the best way of doing this? Probably not. I haven’t tried coding or testing any of this yet. For all I know the process may be much simpler and I’ll come off as a maniacal lunatic for having even thought this up. Or maybe this process will be ambiguous for the case where every player on your team has multi-positional eligibility and it’ll have to be even more nuanced.

This is part where I invite your feedback if you’ve followed along thus far.

Besides being used just to set an optimal lineup, I believe there are other potential uses here. One idea is to take advantage of the fact that once you have an automatic process for determining the optimal lineup, you can then use it to calculate for each member of your league, how close or far their actual lineups are to the optimal. It’d be interesting to test if this metric has a strong correlation to final standings, which would be a new way of quantifying the importance of  in-season management in fantasy leagues.

That’s just one idea, I’d like to think we could come up with a few more as well.

To be honest, I’m exhausted from typing the above out to go into great detail about how the technical aspects work, but I also won’t leave you empty handed. Click here to see the code I’m using on github. Though I’ll admit it’s far where I want it to be at the moment. I’m trying to implement more coding best practices in my repertoire like testing the program in a controlled virtual environment and keeping older versions of the code available in case I was to revert back from a change. Part of this is getting used to processes that take a little time getting used to in order to use them effectively. My code is presented in a poorly-structured manner as a result.

The basic functions that my code employs are 1) getting information from Yahoo about teams and players in a structured format and 2) sending instructions back to Yahoo that cause actual changes to my fantasy team.

With these two abilities, the general process is to first pull in information about the leagues teams and players, then second to use that information to determine the best moves, and then finally to communicate these moves back to Yahoo in a standardized format that the Yahoo API can take and use to alter my team (without me physically doing the work). 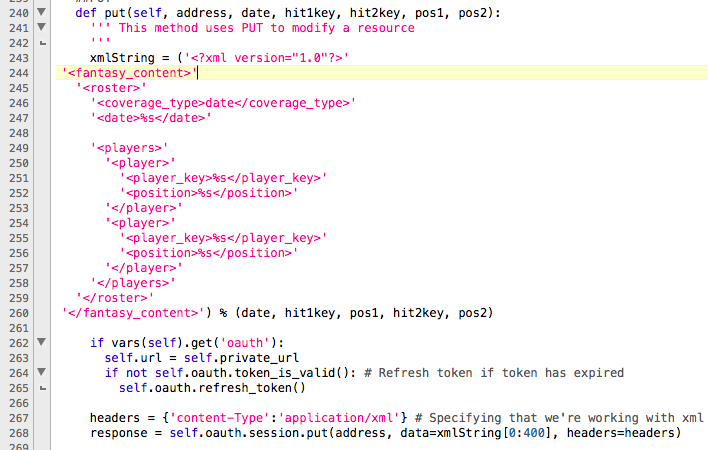 For example, here’s a snippet of code that shows a function called Put, which is used to generate the instructions for a roster move to be sent back to Yahoo. It takes five inputs as parameters and uses those to craft the specific protocol unique for a given two players. The first parameter is the web address that will be used to contact Yahoo’s API. The remaining four are the two players involved in the move and their desired new positions (usually the Bench for player 2). The text in the variable xmlString is what is literally sent to Yahoo to describe the move we want it to execute. This is apparently a strange way of doing this, but it works, which is enough.

That’s all for today. Next time we’ll continue to iron out the algorithm for determining the best moves, and also take a look at what a code for this looks like.

If you don’t already, consider following Paul on Twitter @polarizedranger.