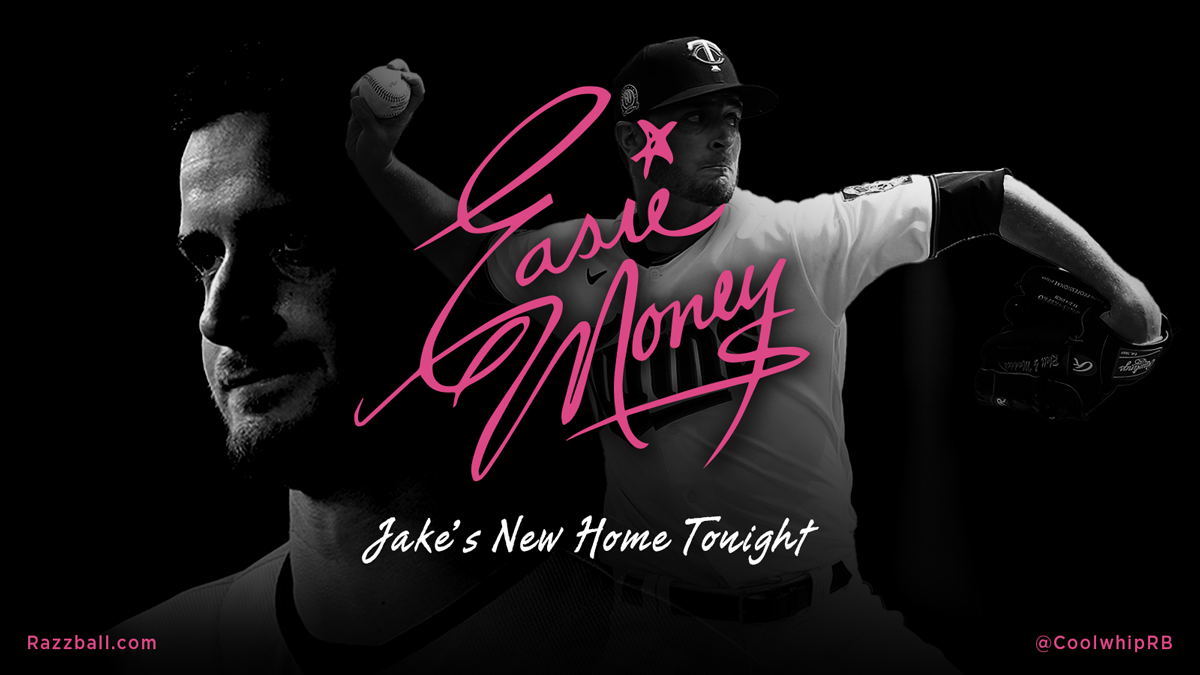 I was sitting at my desk when a great sadness washed over me. I could feel it in the air. It was like a million voices suddenly cried out and were then silenced by roster regret. It was the Frambering. Framber’s glove got fingered and said finger got smashed by a Lindor grounder. And now, Framber has us scrambled and scrambling to find a replacement for his potential production. Well, Houston did the same, and lucky for them (and now us) instead of leaving your rotation scrambled you get to order it Odorizzi. Jake Odorizzi to be exact. The Astros signed him to a 2-year $30M deal with a 3rd-year option. Good things do come to those who wait, says Jake’s agent.

Now I’m sure you are asking yourself, didn’t Coolwhip write about this guy before? Yes, I did. Early in the 2019 season, I broke down the good start of the season Jake was having HERE and projected him to be a top 30 pitcher by year’s end. And he was. I asked Grey if I could just repost the article when he cackled in my face and said no, followed by more cackling. Okayyyyy, Jake the Snake sequel here we come.

Last year was a lost season for Jake, after dominating batters for the better part of 2019, the 2020 campaign proved to be a millstone around the neck. He suffered through 3 injuries while only making 4 starts. Jake had a delayed start due to a back issue that has bothered him before (lack of real spring training and typical offseason workouts). Then, he was sidelined after taking a comebacker off the chest. And finally, missed additional time because of a blister. So, we can pretty much throw 2020 out with the proverbial bathwater. Let’s start by revisiting what makes Jake:

“2017 and 2018 proved to be mostly forgettable. His strikeout rate stayed mostly level but his BB/9 increased to nearly 4. And, his flyball tendencies betrayed him allowing 50 HR during that time, much likely due to a back strain and oblique injuries he dealt with during that time. He went from an amazing story of an under-recruited prospect to an afterthought. *dooda lu, dooda lu* Fast-forward to the present. This [2018–2019] offseason Odorizzi spent time at Florida Baseball Ranch making mechanical adjustments to his pitching including learning how to use his lower half more to drive the ball. The other focus? Spending much of his time re-emphasizing pitching up in the zone, as he had earlier in his career playing to his strengths, a fastball with natural rise. The results…”

So, one of the main things that made Jake great in 2019 was his improved velocity, specifically that fantastic fastball. He went back to the basics, and after making his mechanics better he committed more to his fastball. The fastball is the cornerstone to his success, and by pitching at the top of the zone with rise and late-life, he dominated. That late life on the fastball up paired with offspeed pitches down gives you that magical concept called “pitch tunneling”. Hmmm, what organization likes to teach pitch tunneling with high fastballs? And who do we know that pitched there with a fastball with late-life at the top of the zone to maximize tunneling?

Bingo. Its Houston. And that pitcher was Gerrit Cole. Is Jake going to be like Gerrit? Probably not as Cole’s velocity is a good deal higher. But it should be very comforting as their pitching philosophy is in-line with the way he’s familiar. A match made in whiff heaven! Here’s a reminder of Odorizzi’s fastball. Oh, that’s right, he can subtly make it a 2-Seamer or 4-Seamer.

Like I’ve mentioned in the past, to statcast, his slider sometimes shows up as a cutter so the numbers are a bit skewed. But the main takeaway from 2019 is that the gain in velocity paired with working up in the zone like he in the past during his best years led to Odorizzi getting much higher whiff-rates on his Fastball and change, his primary weapons. And when you can keep hitters off-balance with mostly your fastball (57% of mix), good things tend to follow. The fastball and change worked in tandem, once again *Spongebob rainbow meme* “pitch tunneling” works for him and he’s now in the one place that emphasizes it the most. $$$

In review, what he was able to do in 2019 was cut his walk-rate while raising his K-rate and kept the ball in the park by changing batters eye level with the rising fastball and split-change. Now, the minor fly in the ointment, which should be less of an effect this year is his innings. He hasn’t ever pitched 200 innings in a season. But the good news is almost nobody will reach 200 IP this year and many more than average will be in the middle ground of 140-160 IP (see Rudy’s projections), right where Odorizzi has been the last few years. So if everybody is limited, then nobody is. And that makes Odorizzi more valuable.

Since Odorizzi hadn’t signed yet and basically missed last season, his ADP had been really, really low past 300. That is pennies on the dollar. The upside of a healthy Jake in the Astros organization that is good at maximizing pitchers is top 200 material. Right now a lot of projections have him giving a line close to 4.30 ERA 9.5 K/9 and 1.30 WHIP. That to me looks like the baseline given what he did in 2019. If he is back to full health and pitching well, Jake has the makings of a sub-3.80, even 3.60, ERA pitcher (especially if managed during the 3rd time through order like Rocco did on the Twins) and becoming a Top 40 starting pitcher for 2021. That’s easy money that late in the draft and costs you next nothing. You can take that home tonight… and to the bank.