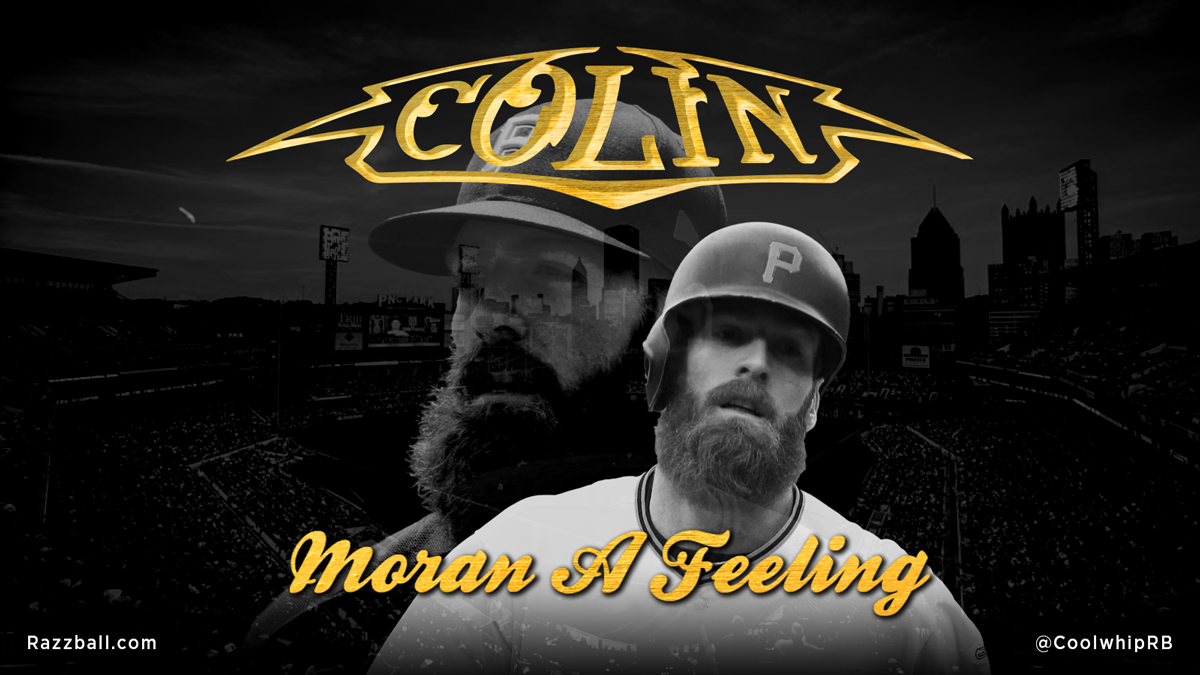 Coolwhip is writing about a Pirate (again)??? I know. As much as I/we make fun of them, somehow they keep showing up. The first article I ever wrote here at Razzball was on Josh Bell. I also have written about Bryan Reynolds. And now, we could be seeing the subtle breakout of Colin Moran. He’s become a bit of a forgotten man over the years. Nowadays, his name doesn’t carry much weight on draft day. And aside from a hot run last year he doesn’t inspire much after either. I get it, he’s been about as yawnstipating as they come. But, did you know he used to be a thing?

Back in 2013, he was the 6th overall pick in the draft by the Marlins. Around him, Kris Bryant was taken 2nd overall while other notables came later like Tim Anderson (17th), Aaron Judge (32nd), and Cody Bellinger (124th). Big things were expected of him that hadn’t materialized. His prospect card reads as 50+ tools across the board on offense minus speed. Well, 2014 the Marlins made a trade: they sent 3B Colin Moran along with OF Jake Marisnick, P Francis Martes (who?), and a 2015 compensation pick to the Astros for SP Jarred Cosart (he was relevant for a second), SS Enrique (Kiké) Hernandez, and OF Austin Wates (who?). There were rumors that Moran was under consideration as the Astros’ first overall selection in 2013 (Mark Appel, that sure didn’t pan out huh?) and so they still got their guy. Though he didn’t exactly light up High-A that year (.294/.342/.393).

After 3 years of marginal offensive production (read as okay, but not great) Moran became yet another trade piece in the big Gerrit Cole deal. The shocker at the time was that the Astros acquired Cole from the Pirates without having to give up Kyle Tucker or Forrest Whitley (sound familiar?) and instead the two primary pieces were Colin Moran (their #5 prospect then) and a one, Joe Musgrove (ironically now traded in the same Pirate fools’ gold fashion). Hmmm, it seems they have the whole trade value thing backward.

Throughout his minor league career he never really stood out. He wasn’t bad, he didn’t struggle… but never separated himself from the pack. Chief among his lackluster performances was his lack of power. That was until 2017 when he had his “breakout” prospect season. He adjusted his approach that resulted in cutting his K-rate, doubling his ISO, and raising his SLG above 500 for the first time. He’s arrived, right? Pirates thought so, as they acquired him in the afore-mentioned Cole trade.

Well… not so fast. In the first half of 2018, he had 8 HR, and then in the second half, just 3. The league adjusted. For the first 2 years as a starter, he was pretty meh just like the majority of his minor league track record. No lie. And then in the short season of 2020 something changed, again. His walk-rate jumped back up to his AAA level, as did his ISO. It wasn’t a full season, so how much faith can we put in it? Maybe, just maybe, Moran is like a good Guatemalan spiced rum; he just needed more aging to reach his full flavor profile.

Why am I spending so much time on his past? Because this is a story about how he got here, Colin’s gradual climb through the melange of mediocrity. A lot of people had a good feeling about what he could be—hoped to be—but it has taken a long time for his bat to ferment through the minors and then on the poop deck of Pittsburg. Perhaps he’s more than a feeling.

This brings us to the “fun with small sample sizes” portion of this episode. In the early going of this season, he is walking more than he has before. Yay. His strikeout rate is also at a torrid pace though, yuck. He already has 4 HRs that have contributed to a spike in ISO and SLG. He’s hitting near .300 but it also comes with a bloated .394 BABIP (career average around .300)—yikes! So this level is not sustainable in the least. Is there something in his approach different that gives us hope? Let’s take a look.

So Moran’s batted ball data is a bit “all over the map.” This year he seems to be elevating the ball more, which is good. We’ll see if he can keep it up as last year he still had a 56.3% groundball rate, gross (he’s not exactly Willie Mays Hayes). And this goes to the Pirates poop deck again for developing talent, Moran is slow af. Why have they let him hit so many balls on the ground for so long? He needs to be lifting that shizz. So 2020 certainly benefited in part by a smaller sample. However, one improvement that we can point to—in 2020 and so far in 2021—is that he’s substantially increased his HR/FB ratio and could be in part due to elevating his hard contact. Sustainable? Quality contact?

Reviewing his statcast data we see an improved exit velo (a rising floor), improved barrel% and hard-hit rate (that jives with the fangraphs data) and the xSLG shows a real improvement over the 4 years. It looks like he’s finally putting it together. The key for him it seems is hitting less ball on the ground and elevating his contact. His change in approach appears to have carried over into this season with him generating better contact. It’s still very early, but encouraging. Here’s the last piece of data I’ll share: 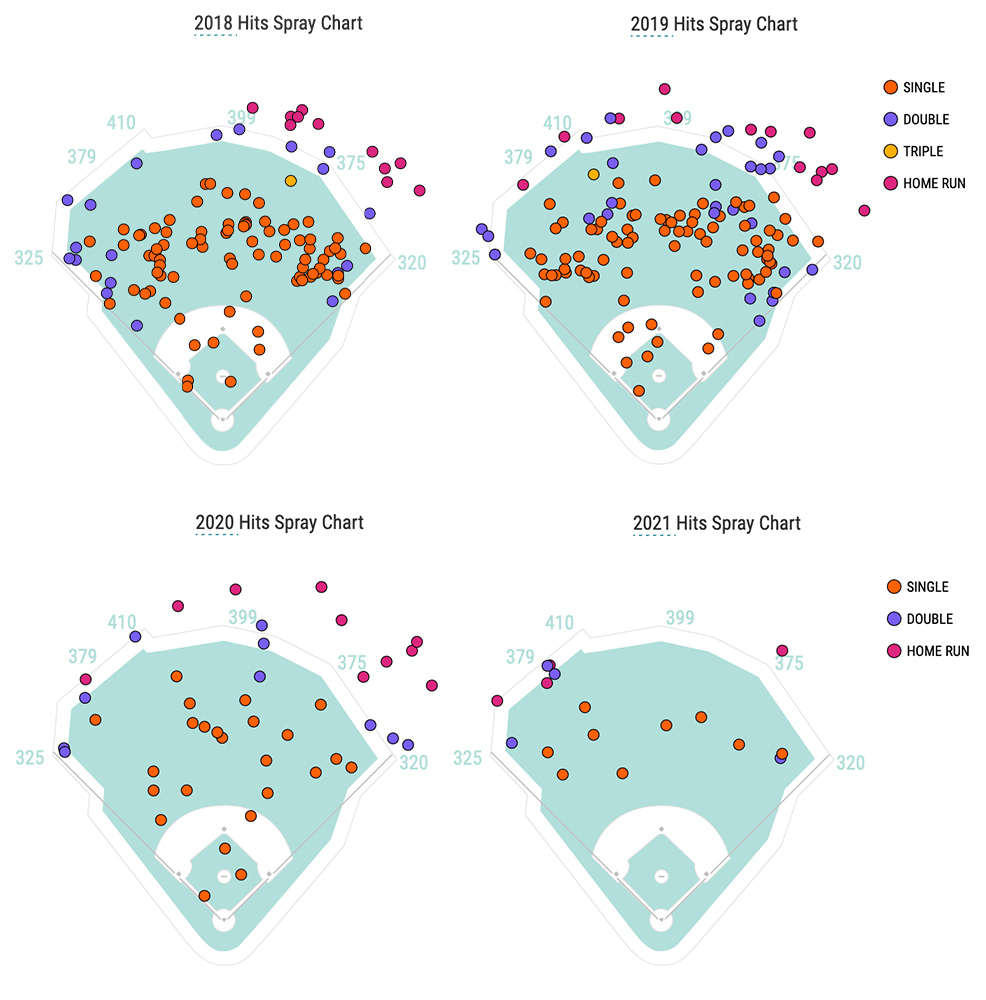 Look at his spray chart progression. He has moved from strictly pull power to all-field power. And in the early going this year (albeit “just enough” home runs) all but 1 has been to the opposite field, same with his doubles. So there is maturation after all. Now due to some of the underlying data, I wouldn’t bank on him hitting 30 HR and a .290 AVG, but if the trend continues and he can elevate the ball consistently I think 20-22 HR and a .260+ average is possible. And for a guy coming off the waiver wire or a last pick in the draft, that’s decent value. Especially if you need him to fill in for an injured star.

Colin Moran may not be the next big thing but he could be a very useful one. He’s not smokin’ the balls out of the park but he’s using the field well and that could at least leave you feelin’ satisfied. There’s peace of mind in that. I can’t promise rostering him is a sure thing and don’t look back, but he’s at least a good play in the first half for leagues with waivers. What I can say is that Colin Moran looks to finally be more than a feeling.