It only seems fitting that I should take up the mantle of the 2017 Fantasy Baseball War Room. I’ll be the first one to admit that the satisfaction of working up a beautiful Excel spreadsheet gives me the same kind of goosebumps as when someone utters to Grey the words…“Giancarlo Stanton”. Is it nerdy? You bet. But nerds win leagues, so let me help you win yours. Without further ado, I present the 2017 version of the Razzball War Room “Excel edition” to assist in your league-dominating draft performance. Let’s delve into the features:

First and foremost, this workbook is auto-updating. So long as you click ‘refresh data connections’, you are guaranteed to be seeing Grey’s latest and greatest projections which are updated throughout the pre-season.  To do so: click the “Data” tab in your ribbon,  and then “Refresh all”; if you don’t know what the ribbon is, then this spreadsheet version is probably not for you, and let’s hope for your sake that your league opponents don’t read Razzball or are all drafting from Android devices with no Excel in sight. Seriously, though, if you find the Excel version too daunting, be sure to check out the web version of the War Room linked from Grey’s how-to post for the online Fantasy Baseball War Room.

Features in the 2017 Excel edition include:

A few of my personal tips (also listed on the ‘Notes’ tab):

Here are some screenshots of the 2017 spreadsheet in action, showing the link between Players and Dashboard tabs: 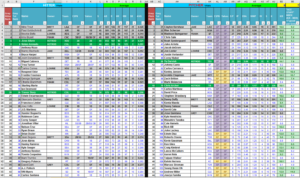 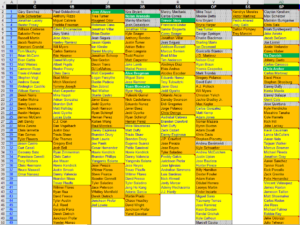 Keep checking back on this page throughout the pre-season, as I hope to update this spreadsheet as additional Razzball rankings come out. Future features that might still be added as additional sortable columns on the ‘Players’ tab this season, once released this month and next, include:

Credit goes to the originator Lou Poulas and a host of other update authors who have contributed over the years. I’m pleased to join their ranks and share this latest version that includes my own tweaks and fancy color formatting added over the last couple years.

Any feedback / suggestions / bug fixes?  Please leave a comment below. Good luck with your draft(s)!