A couple of weeks ago, I took a look at hitters who are being priced cheaper in 2020 than their 2019 stats would dictate. This week, it’s time to assess Starters using the same approach.

Recency bias suggests that 2019 performance weighs most heavily in our minds when making 2020 decisions. That certainly plays out in many scenarios, but there are other players who’s 2020 price is discounted compared to what just happened. I’m guessing that’s mostly due to the prevalence of projection systems in player valuation. A good projection system should absolutely be the baseline for your 2020 valuations. But as we know, these systems are slow to pick up on skill changes. Three year weighted averages & regression to the mean helps the systems get the most players right; but it also means they systematically devalue 2019 stats. The goal of this post is to look at what just happened (2019 performance) and find places where the market (ADP) isn’t pricing in those stats.

For a couple of reasons, with the reduced schedule & delayed opening day, I’m focusing even more heavily on skills over playing time:

Today’s chart looks at 2019 dollar values per game, to measure recent skill, and 2020 ADP to measure the cost. Click to enlarge: 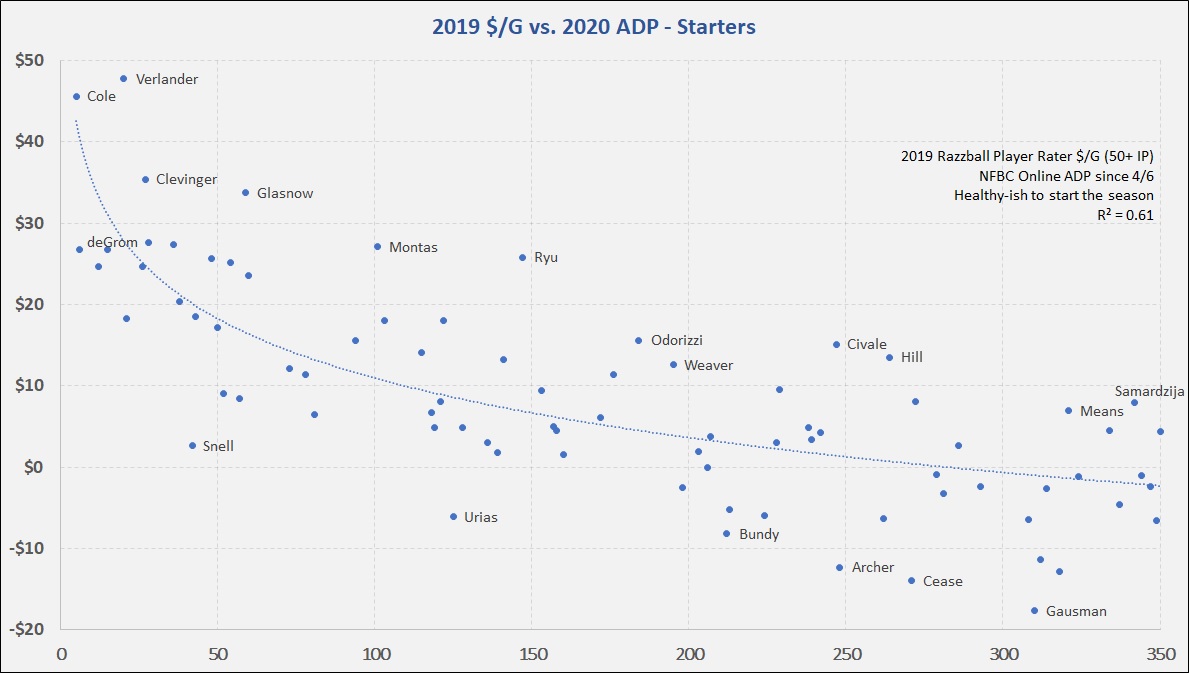 (For clarity’s sake, I’ve only labeled those players notably far from their peers. You can see the full chart, with all players labeled, here.)

The chart can be read in two ways:

First, if you look at a player and draw a horizontal line, you can find out what he should cost (ADP), if you were buying a repeat of 2019. Jake Odorizzi, for instance, earned over $15 per game last year; on average, that production costs a top-75 pick, and Odorizzi is going at 184 overall. A bargain!

Based on this approach, who’s cheaper in 2020 than their 2019 performance would dictate?

On the flip side, the guys sitting below the line underperformed in 2019 compared to their ADP cost this year. In other words, you are paying for a bounceback on these players: