First Mike Trout and now our beloved Trea Turner (and a bunch in between, but we’ll focus on baseball’s young heartthrobs for the time being). The baseball Gods are clearly punishing us all for the use of juiced baseballs this season. Major League Baseball has denied any kind of change in the balls despite some mounting evidence, but I bet it is something that gets looked at and adjusted in the offseason. Which leads me to wonder whether this will be something we will be talking about come March…

Greetings from beautiful Sandestin, FL. I am on vacation for a long holiday weekend, but I am so dedicated to Razznation that I am taking time away from the beach to make sure you still have the information and insight you desire this week.

Before we get started, feel free to ignore Clayton Kershaw. I have no inside information that he might not start twice this week, but it seems that every week that he is on the list Dave Roberts and the Dodgers change things up on us. Going forward, if he is on the list, just assume that he will be removed. If he is not on the list, assume he will be added. Roberts and Co. are determined to tinker with their rotation every week, possibly just to mess with us. Since he is scheduled to start twice as of this writing, I assume that that will no longer be the case by the time you are reading this roughly 18 hours from now.

The theme of the Top 100 hitters this week is triumphant returns. Carlos Gomez is back from his latest trip to the disabled list and is mashing. Ab-so-lute-ly mash-ing. Keon Broxton, left for dead just a few weeks ago, is the hottest power-speed combo hunk in all the land. Even Cameron Maybin has returned to our ranks, though his return has been more gradual over the last few weeks since we lost our beloved Mike Trout.

I have not been overly kind to the newcomers since taking over this series. Perhaps that is my way of initiating them and making sure they belong among us Top 100ers. This week, though, my heart is filled with warmth. Perhaps it is because I am looking ahead to a mini 4th of July vacation, or maybe I am just getting soft in my old age :::pause here and smirk as you slowly look around the room:::.

I wish I knew more about Street Fighter so I could come up with better Ryu puns or references. My knowledge of SF (do people abbreviate it like that?) ends at knowing it was fighting video game I had growing up that wasn’t as good as Mortal Kombat (hot take alert). And for the record, yes, I know Hyun-Jin Ryu pronounces his name differently. Give me a break, and go with it.

Every year, there are surprises in fantasy baseball. Some players come out of nowhere and breakout or, in the case of Aaron Judge, absolutely dominate. Other players regress after a breakout season the year before. There are even the players who have long track records of mediocrity who, all of sudden, appear to have figured something out en route to becoming legitimate contributors both in fantasy and in, you know, real baseball. I like to call these players Justin Smoak-Logan Morrison-Yonder Alonso. The more popular terms among Razzballers for these players are Schmohawks and Hot Schmotatos.

Another week, another Clayton Kershaw start pushed to Monday. At least this week they moved the start before I wrote and submitted this article. If they move it again Saturday morning, then I will be convinced that Dave Roberts is just doing this to troll me every week. As of now, he is your top two-start starter for Week 12. He might even deserve his own tier.

For Week 12, there aren’t a ton of attractive options after our first two tiers. In previous weeks, we have had middle-of-the-road arms with some good peripherals or some recent success that were available in the majority of leagues. This week, though, I’m not crazy about any of the starters on this list that are going to be available in most leagues. Just look at the numbers in the chart below.

I use a number of different tools, sites, and metrics every week to adjust my rankings and to determine exactly who I should focus on each week. I usually try to focus on players owned in less than 60% leagues, players who are rising or falling and who you should probably buy low or sell high on, or players who are new to the Top 100 or on the cusp of joining the ranks. It has only been a few weeks since I took over these rankings for the legendary [email protected], so I am still working on creating the most efficient system (I spend wayyyyyy too much time agonizing over these rankings every Sunday).

I start by going over my notes and spreadsheets from the previous week, then take a peek at Razzball’s Player Rater and look at the current rankings and the Rest of Season Projections. Once I jot down some notes from those, I take a look at ESPN’s PR15 Player Ratings for the last 15 days. Lastly, I check FanGraphs with a focus on the best wOBA for the last 14 days and the last 30 days. Usually, once I am finished with that process, I have an idea of who I am going to write about and a starting point for adjusting the rankings.

Mike Trout used to be pretty much the only reason to watch the Angels :::pause here for sobbing break:::. Despite having the best player on the planet and one of the larger budgets in the league, the Angels were still not very good. Now Trout is gone forever (Okay, he will probably be back in a couple months) and we have no reason to watch that team out in Los Angeles of Anaheim of California or whatever they are calling themselves this week. But that wouldn’t make any sense. Why would I start off this article with such a non-sequitur? Aha! I wouldn’t!

Let’s begin by having a moment of silence for the fact that we will be without Mike Trout for two months. I dropped him to 23 in the rankings below, which are considered ROS trade value. I know it is hard to justify Trout over some talented players who aren’t going to miss two months, I just couldn’t bring myself to drop him much lower. The Razzball Player Rater has him all the way down to 71 for ROS projections. Personally, if I were to trade Trout, I would hold out for the highest bid and make someone overpay. Otherwise, I’m not moving him. And in keeper leagues, I would still have him at number 1 and wouldn’t entertain offers.

Now, for the players who are playing right now. The two players I moved up and want to focus on this week are Justin Bour and Justin Smoak. I received some questions and comments on here and on Twitter last week about Smoak, so let’s take a look at him first. He has looked great this season, but I have my doubts.

While Smoak’s slash line and counting stats look great right now, unless he finally figured everything out at 30 years old, I have my doubts. Yes, he is currently on pace for almost 40 home runs. Yes, he is striking out 17.9% of the time, which is almost half as much as he did last season and is well below his career average of 23.5%. Through 55 games and over 200 plate appearances in 2017, the metrics back up what he is doing.

But here’s the thing. 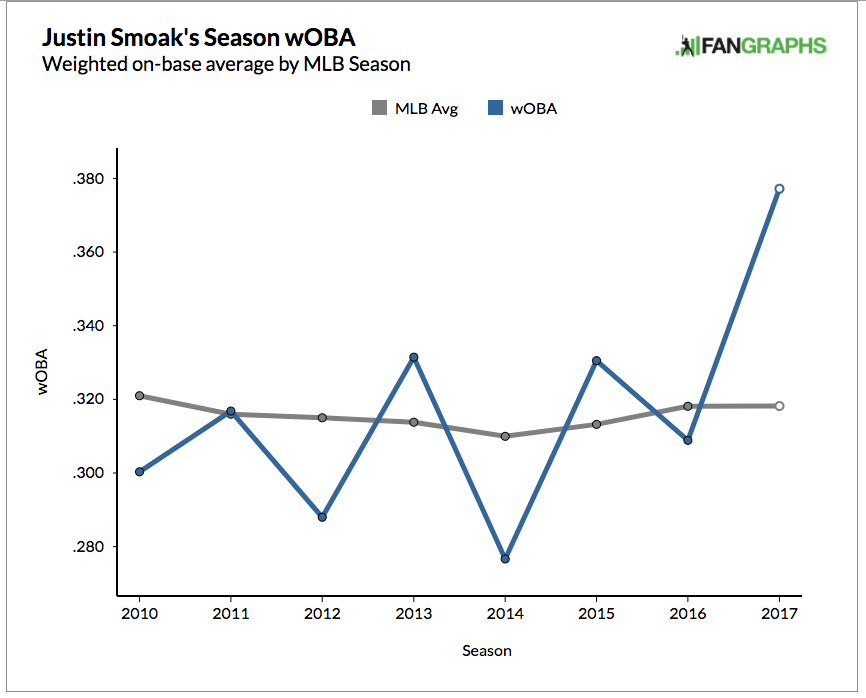 Translation: Smoak isn’t this good. This probably isn’t going to last, and a regression is coming.

Now, as far as Justin Bour goes, I am still skeptical but am less skeptical. Bour is 29 but has just over 1,000 plate appearances at the MLB level. He has displayed this kind of power before, both at the major league level and in the minors, so it is easier to believe that his current power stroke is real. Will he continue to hit up around .300? No, but it is reasonable to expect him to hit in the .250-.270 range and offer up 30 home runs, as long as he can stay healthy (which he can’t always do).

The main point here is that, while Bour is only a year younger, he doesn’t have as much of a negative track record that we can hold against him. He has also displayed plus-power in the past, while Smoak has always struggled to fulfill his potential in that department. Bour is likely to regress a bit as well, but I don’t think his regression will be as extreme as Smoak’s. If I had to pick between these two first basemen as a guy I value higher ROS I am taking Bour every time. Maybe I’m just biased now that I live in South Florida, or maybe their track records are telling us everything we need to know about them…

Thank Godley I didn’t spend any time last night thinking up Zack Godley puns. The Diamondbacks inexplicably sent him to the minors the other day. Inexplicably, I say! Stop trying to justify it to me! Yeah, his 4.78 K/9 vs. BB/9 (there has to be a better way to write that) isn’t great, but still! 2.39 ERA! Five straight quality starts! This is an outrage. I want to speak to a manager!

Ok, so he was apparently sent down temporarily as they recover from a 14-inning dance-off with the Pirates. He’ll be back. At least, he better be. He does, however, have to stay in the minors for 10 days now. So, no Godley-ness for a couple weeks. The Dbacks called up Silvino Bracho to take his roster spot, so at least they gave us a fun name to say. Silvino Bracho. Silvino Bracho. Silllll veeeee noooo braaaa chOOO.

Anyway, as the headline suggests (or tried to suggest), we are here to talk about Dinelson Lamet and not Godley. We have only seen Lamet for two starts in the bigs so far, and this week we are going to get two more. So, do we take the gamble and roll with the young starter from San Diego for two starts this week? Let’s take a look…