Welcome, welcome! Are you all as terribly confused about who plays for whom in MLB today? As a member of the Twins fandom (and I can’t say I carry that card with me…even in the house when nothing else is on TV) I saw our team act like a mattress fundraiser over this past week. The Twins jettisoned most everything (and by everything I mean “the franchise” Jose Berrios) and got some prospects in return, but if you know me, I want my players at the table and my dice loaded instead of sleeping in hotel lobbies on foldout chairs. ENYWHEY! Rosters are a freaking mess at the time of writing, and your due diligence should be to check, check, check who is playing today. That’s three checks. You know what makes this job *super* easy? Rudy’s DFSBot. I know, you might be looking at the price of the DFSBot and saying, “it’s so late in the season, I’ll wait.” But wait! Grab yourself a Roto Deluxe subscription for $26 (that’s like $2/week ROS) or $35 to turn off the ads (trust me, it’s great when they’re off). You don’t get the optimizer, but you do get automatically updated lineups and some of the best projections out there, and you can home brew your own Google Sheets dashboard as a lineup optimizer. Plus, it keeps the pantry full of Pop Tarts for all of us. OK, done with the sales pitch (and I really, truly use Rudy’s stuff every day).

To go along with the weird lineups, we’ve got a few options for your slates today. If you like smaller slates (big fish in a small pond!), there’s a 5 game early slate and a 9 game late slate. If you like to sit around the computer and swap out players, there’s a 15-game main slate that goes all day. The man slate will be volatile and ripe for the picking — lineups will be such a mess today (post-trade deadline, some lingering covid situations) that if you’re just hanging out and watching TV, you can swap in players as they appear on the rosters and take advantage of the inefficiencies in the markets.

Brandon Woodruff ($10,800): Here’s a bold start, because Atlanta just lined up a bunch of new players in their outfield. Sure, Adam Duvall has played plenty in Atlanta, but change can be tough to deal with in the middle of the summer and a long season. Woodruff comes into the game with a 23.7 K-BB%, which is great, the projected Atlanta lineup at the time of writing isn’t filled with players who barrel the ball a lot.

Aaron Nola ($11,000): Nola’s got my highest confidence/cost ratio for today, but he’s also very expensive. He’s also got a 23.7 K-BB% and is facing off against a Pittsburgh lineup that is projected be rather impotent.

Yu Darvish ($9600): Surprisingly, the cheap ace today. Faces off against the rebuilding Rockies. Right now, I could play for Colorado, and I get winded after a mile-long hike. I’d never make it to Coors Field.

If you’re more graphically inclined, here’s my breakdown of the top pitchers today. These pitchers are the three best on the slate. If you want a cheap, volatile option, John Means ($7200) faces off against Detroit. 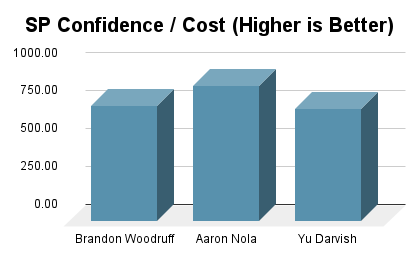 Shohei Ohtani ($4500) — Ohtani is still “off” according to the pundits based on his paltry previous season splits against lefties. Today, he faces off against lefty Cole Irvin, and Ohtani’s 2021 splits against lefties at home are as follows: .409 wOBA at home, .424 wOBA, .431 ISO, and a 19% line drive rate. All of those are basically top 5 in splits on the year. Ohtani’s crushing all pitchers right now, and let him drive your team today with maximum exposure. Also, Ohtani got nicked on the thumb the other day by a foul ball and is taking a break from pitching and has a “DTD” designation, so ownership on him might be down a tick today.

Pete Alonso ($3800) — Your other cheap slugging option today, who faces off against notorious ace Wade Miley. Alonso’s splits against pitchers like Miley: .396 wOBA vs lefties at home, .407 wOBA vs lefties, and a .374 ISO vs L.

Avisail Garcia ($2900) — Let’s get into the cheaper hitters that will give you an edge today. Garcia faces off against Kyle Muller in the late slate today, and he’s got a .408 wOBA against L, coupled with a nice .246 ISO v L. His floor is buffeted by a 26% line drive rate against L, which means he’s got a high chance for at least a single.

James McCann ($2200) — As always, check if he’s in the lineup today (he’s played the last 3 days). But if he’s in the lineup, he makes a nice pair/stack with Pete Alonso: McCann has a .405 wOBA against lefties with a .217 ISO (great at this price). What’s more, is that McCann has a great floor today, with a 28% line drive rate against lefties, which means he’s very likely to return a non-zero value if not surpass his expected value.

As above, so below! Here are the rest of my cheap hitters for the day. These players are classified by being part of teams that are expected to be on low-scoring teams according to Vegas odds (thus having lower ownership percentage than average), yet they also have line drive % above 20% against their projected handed starters and have ISOs above .200 against their projected handed starters. They’re also projected to bat in the top 5.

As always: I’m writing this article well before roster lock, and it’s going to be a messy roster day today. Please do due diligence by checking rosters before you submit. 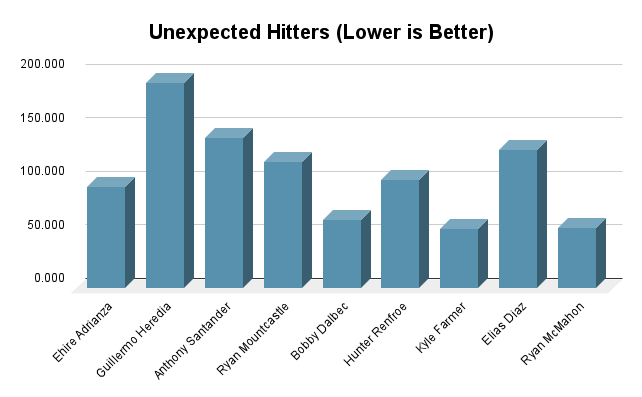 I’m Only Happy When it Rains:

Not a lot of rain on the radar today. Non-zero chance of storms in STL and DEN tonight. High pressure almost everywhere, with lower values on the east coast (so, a touch better conditions for the Mets stack). 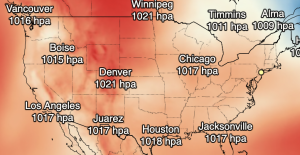 Toronto returns to the Great North, a place they haven’t been in like 2 years. Although Vegas has them as a -259 favorite over the Royals, the Razzball projected line is at -186 in favor of Toronto. That means, you could find a big pay day by putting some money on the +211 line on the Royals that Vegas has right now. Is it smart money? Nope. But as Mitch Garver named his child recently, you gotta take chances to make dough.

Yooo EB! I am excited to watch Nolas start today :) What are you most excited about?

To be honest Nolas start isn’t what I am most excited about or maybe it is when your mother in law is over all day!

Would you mind helping me with my pitching lineup next week in a weekly league? I am auto starting Rodon vs KC Peralta vs pitts, Nola @ wash and Castillo vs min I think although Rodon kinda scares me a lil right now

P.S if i use both 2 start pitchers I will still be down 1 start vs my opponent cuz he uses an extra SP in his RP slot… is that even good strategy? I could do the same, and match him I guess haha.

Extra pitchers in RP slots is all dependent on who the pitcher is. If it’s Randy Dobnak, I’m definitely not quaking. So, it’s a case by case basis if it works, kind of like multi-position eligible players. Yermin Mercedes certainly didn’t work out as my second catcher in Razzslam…

Each of those 2 starts are fine…I probably hold off on Carrasco rn because he’ll have a cap and who knows if that cap is 4 innings. Megill’s playing for his career (tons of Mets pitchers coming back) and Sandy is an innings eater. Should be fine this week. Hope that helps!

How does dollar value change after the trades? I have Hendricks and Adbert Alzolay. Would you pitch Hendricks him today?

Would you start Merrill Kelly of AZ against the Dodgers? LA has yet to name their starter. He has been pitching well. However his Dollar value is minus 9.

Yeah, lineups will be wacky today. Go with Hendricks, WAS is a mess now. Kelly, i’d be more careful. Take a look at who starts for the Dodgers tonight. If it’s that All-Star lineup, I avoid Hendricks.

Most pitchers will be the same after the trade ROS; even if German Marquez moved from Coors (pitcher disaster) to Petco (pitcher friendly), it would have — at most — a 5%ish bump on projections across the rest of the season (which is like 9-10 starts left). So, at this point, don’t sell on anybody. Hope that helps!

The Dodgers are going with their regular line up and using Mark White against Merrill Kelly.

Was going to sit him? Your thoughts?

sorry i didn’t get back in time…i probably would have said no, and looking at the score right now, with 7 hits and 3 runs on the board already, i think that would have been a good choice lol