Please see our player page for nick anderson to see projections for today, the next 7 days and rest of season as well as stats and gamelogs designed with the fantasy baseball player in mind.

Welp, odds are you done got rekt this week with some injury news one way or the other, especially if you’ve invested heavily in Blue Jays players and a certain MVP candidate on the White Sox. The latter is true for me. Good news is I have my Hardwood Hogs playing for an Elite 8 berth to look forward to tonight. And honestly, if Oral Roberts shocks the world once again, the March Madness fan in me isn’t gonna 100% hate it. I might cry, but some of those tears will be of joy for ORU. Maybe.

Enough about me. Let’s get to those injuries:

Early yesterday, I was staring out my window, the rain slowly rolling down the glass, and from the outside it looked like tears were rolling down my cheeks. From the inside, it also looked like I was crying, because I was. I dramatically turned away from the window, put my hand to my forehead and fell into my Giancarlo beanbag. “Cuddle me, Giancarlo Beanbag,” I whispered into the beanbag I had dressed in a Yankees jersey. On the stereo, Rob Thomas scream-sang, “I want to take you for granted,” and I thought about that. Had I taken Eloy Jimenez for granted? Was this…that? As the wait for injury news dragged on, I wandered out onto the road and stopped a car to ask them if they heard anything on Eloy, and they said, “Are you crazy get off the freeway?” Was I crazy? Was that what this was? So, Eloy Jimenez is out for the year with a ruptured left pectoral tendon. Now allow me to return to playing terrible Matchbox Twenty songs and sobbing IT’S 3 AM AND I MUST BE LONELY. Obviously, my top 500 and top 20 outfielders were updated. Who knew I’d prefer Alloy Jimenez who has been blended with sturdier metals to improve wear. I wonder if CVS has condolence cards for fantasy teams. Anyway, here’s what else I saw in spring training for 2021 fantasy baseball:

When I decided to name this piece the RP Thrift Shop I couldn’t get the Macklemore jam by the same name out of my head. So here I sit, wearing a fake mink coat, shaving the sides of my head. Like Mack I’m not looking to spend $50 on a t-shirt. I’ll take the 99 cent stuff that smells like R-Kelly’s sheets. Thus, the framework is laid. Let’s talk relievers. Maybe Ryan Lewis will drop a bomb chorus for us.

If you just look at Diaz’s 2020 surface numbers when you’re in the draft room you might click his name when it’s your pick. What those numbers leave out is how the Mets protected him from his Molotov throwing self for an entire month of a two-month season. Sounds exactly like someone you want to invest a top 100 pick on.

And the men who hold high places

Must be the ones who start

To mold a new reality

Closer to the heart

What? You didn’t know that Toronto-based prog rock band Rush were huge roto baseball fans? That song was released in 1977 — the same year the Toronto Blue Jays played their inaugural season. It’s actually about their love for under-appreciated closer Pete Vuckovich who saved 8 games for the blue birds that year. A lot of us have that same love for certain closers and when it comes to draft time we think with our hearts rather than our heads.

The best 2021 fantasy baseball team is a misnomer. Thankfully, none of us know what misnomer means. Sounds to me like someone tentatively wants to date the Travelocity Gnome’s daughter, “Miss Gnome, er, you wanna grab some boba and chill?” Miss Gnome brushes back her hair and bats her eyelashes that are almost as long as her two-and-half foot body, “I’d love to,” but her voice is high-pitched, which is a turn-off, so you cancel plans with her repeatedly until she gets the hint. Sorry, Miss Gnome, I like my women’s voices low like their stature. Any hoo! So the title is a bit of a superlative. What was I gonna say, “The Mostly Kinda Good Fantasy Baseball Team?” You’ll get over your scoffing; I have faith in you. This is the best 2021 fantasy baseball team that I can put together when drafting from my top 100 for 2021 fantasy baseball and top 500 for 2021 fantasy baseball. Honestly, I could draft another 25 teams from those lists, and they’d all be different, but equally terrific… Well, one of the twenty-five would only be sorta terrific, but it would be really hard to tell which one that is. If I took Adalberto Mondesi in the 2nd round, everything after would change. If I took Trea Turner in the 1st round, everything after would change. I’ve previously gone over my 2021 fantasy baseball draft prep for the first few rounds and pitchers pairings.  For this exercise, I’m taking Cody Bellinger in the first, because, well, people complained previously I always did this post by taking the first pick, so I’m switching it up, like when you combover your hair right instead of left. Last year in my “Best Fantasy Baseball Team” post, I took Tatis with my 1st pick, when ESPN was telling you to draft him 43rd overall. Cust kayin’. Until pick 100, I’m taking one guy somewhere in every fifteen picks. It would be nice if I was in a league where someone drafted Gerrit Cole and deGrom in the first round and I was able to take Trevor Story in the 2nd round (which is likely in some leagues), but since Bellinger and him are in my first 12 picks, according to the rules I’ve set up for myself, I can’t take them both. Then, as we all know, once you get into the 100s, there’s wide gaps between ADP and where players are actually taken. People tend to look at team need over value. So for this exercise, once I get to pick #101, I’m going to pick two players every twenty picks. Finally, because there is so much latitude in the latter rounds, I gave myself free rein to fill up my team after pick 200. Throughout the draft, I also gave myself the ability to reach to a lower draft pick, but not reach forward. Or reach around, if you’re feeling frisky. It should still be my ideal team…or not. Let’s see, shall we? Bee tee dubya, this team is a 12-team, 5×5, one catcher, 5 OFs, MI, CI, 1 UT, 9 P, 3 bench, just like the Razzball Commenter Leagues (go sign up, you Big Chungus).  Anyway, here’s the best 2021 fantasy baseball team:

All in all, the MLB trade deadline wasn’t an all out bullen nuke. We have some spots that need updating but nothing more than 2020 has been throwing at us. If you’re falling behind in a category you need to attack it with an all out assault from multiple angles. See if some of these cheap sources can help you out. 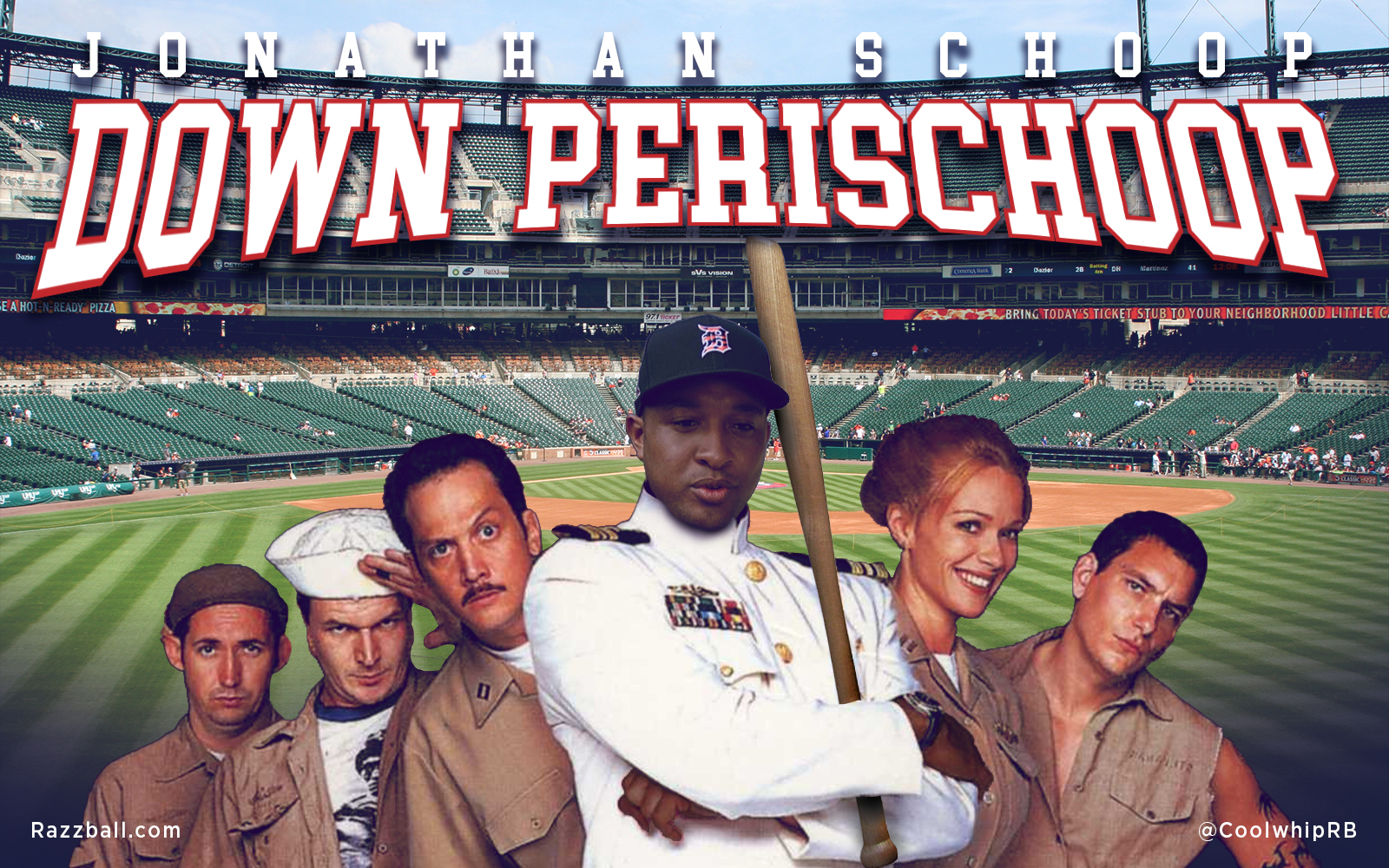 Is it already time for my Jonathan Schoop pickup post this year? Geez, time does fly. Like your mother! What does that mean? I thought I heard she was a flight attendant. If not, I’m so sorry. Like your mother! What? I thought I heard she was very polite and always said sorry. Guess she’s a terrible person. My bad, was trying to be nice. So, Schoop, rhymes with dope, not Shoop, Shoop-e-doop. Uh, here I go, here I go, here I go again. Five girl readers, what’s my weakness? Men (who play baseball)! Damn it! I promised myself I wouldn’t make any allusions to Salt-N-Pepa. By the way, George Clooney has really nice hair. What color is it? SALT AND PEPPER! God damn it! Okay, so Schoop has cut his Ks (minimally), but is hitting better than usual with a much flatter swing. Considering how much he would loft the ball vs. now? I think he can get power and average with his new swing. Maybe call it the New Jonathan Swing — Tony! Toni! Tone! says Feels Good! If nothing else, Schoop is worth rostering because he’s A) Not rostered in nearly enough leagues. B) Showing off a new swing that’s working for him, and is around a top 10 2nd baseman on our Player Rater. C) There’s no C. D) There was no C, why would there be a D? E) Grumbles F) Me, stop listing letters! Anyway, here’s some more players to Buy or Sell this week in fantasy baseball:

You all can blame me for the weekend bullpen chaos. I said last week was a relatively calm one on the saves front and as soon as I typed the words the baseball gods launched a comet of calamity at MLB. I shall do may best not to draw their ire again anytime soon.