Reflecting on past thoughts, musings, and predictions are vital to development. Taking old thoughts, breaking down their logic, and finding flaws, helps us understand, even in the slightest way, why something we thought was wrong. Even when we’re substantially correct, human nature and inherent randomness leaves room for steps in logic to be restructured. I don’t think reflection is conducted often enough in the space of fantasy baseball, particularly because it’s hard to take time away from future predictions, which present value to readers, in favor of self-criticism, which largely presents value to yourself.

This column serves not only as a reflection on pitchers I’ve thought and written about extensively, but also gives further thought to where they will end up as we progress forward in 2018 and why circumstances might have changed.

Castillo is a player I’ve covered numerous times since his shutdown in 2017 to his most recent struggles. After aggressively ranking him preseason, I found myself in a mental pickle early: retreat on my praise or fade the small sample. The latter is difficult to do, especially when all we have to go off is a four-game sample and supportive arguments are associated with games less recent in memory. Every time I wanted to present an argument about Castillo, my mind immediately retreated as I knew the slew of counterarguments too clearly.

I detailed Castillo’s start on Tuesday on my latest Pitcher Thoughts podcast (stream) with attention to a pitch I thought was integral to putting back together his season.

While his usage of this slider was the highest of the season on Tuesday,  it wasn’t in the zone enough to be a factor in neutralizing either side of the plate (Castillo is generally changeup-dominant to LHH and slider dominant to RHH). Even if only to provide fleeting confidence that Castillo is stitching his repertoire back together, this slider usage had me intrigued.

Fast-forward to Sunday’s start in Los Angeles against a tattered Dodgers team, Castillo used his slider under 10 percent of the time, fading any confidence I had in his slider being the issue causing his skid (Sunday Start: 6 IP, 0 BB, 8 K). While Castillo can only improve with a revived confidence in his breaking ball, getting him back to the baseline many swooned over during draft season is in the process due to something else.

Taking a look at Luis Castillo's arm slot adjustment. Keep an eye on frozen frame at end of GIF. Camera angle slightly different between starts, but placement of shoulder with white jersey slightly higher than red jersey in background. Both CHs on outer-third. #Reds pic.twitter.com/8cjkCywacL

His arm slot may have been the issue, and after an adjustment, Castillo has posted a 7:1 strikeout to walk ratio compared to 1.8:1 in his six prior starts. The Player Rater is a fantastic resource to compare and contrast arms based on rest of season projections. We currently have Castillo as the 45 starting pitcher. While his wins are severely limited, I think he can perform into the SP2-3 conversation as he puts his past struggles behind him and settles in with his refined arm slot. If he’s sitting on your waiver, he should be owned and after two weeks of the season, I never thought Castillo and the next name I’m about to mention would actually be in the same sentence.

Arizona’s southpaw is sitting on the most volatile stock swings of any player through one and one-half months of baseball. Drafted outside of the top 200, to top 15-20 starter, to the present day. Repeating what Jeff Sullivan wrote on Fangraphs about Corbin’s velocity isn’t efficient, but the prevailing point is simple: something is wrong. It’s not reflected in Corbin’s last two outings and neither are we certain that the walls are about the cave in, but a two mile per hour drop in fastball velocity comparing April to May is concerning.

My first entry to pitch tunneling and its relationship to fantasy baseball for this very site praised Corbin for his ability to sequence his slider to his fastballs, a pitch many forgot the depth and effect of from years past as 2018 crept closer. While I didn’t see a stretch as strong as his first six starts coming, I – and many others, such as Grey – were expecting surplus value on his ADP.

Velocity drop can be due to dead arm, injury, and a variety of other things out of sight and mind. The unfortunate issue is that we likely won’t know until it’s too late. My biggest concern comes from the lack of swings he is getting overall, which suggests an obvious change deception. 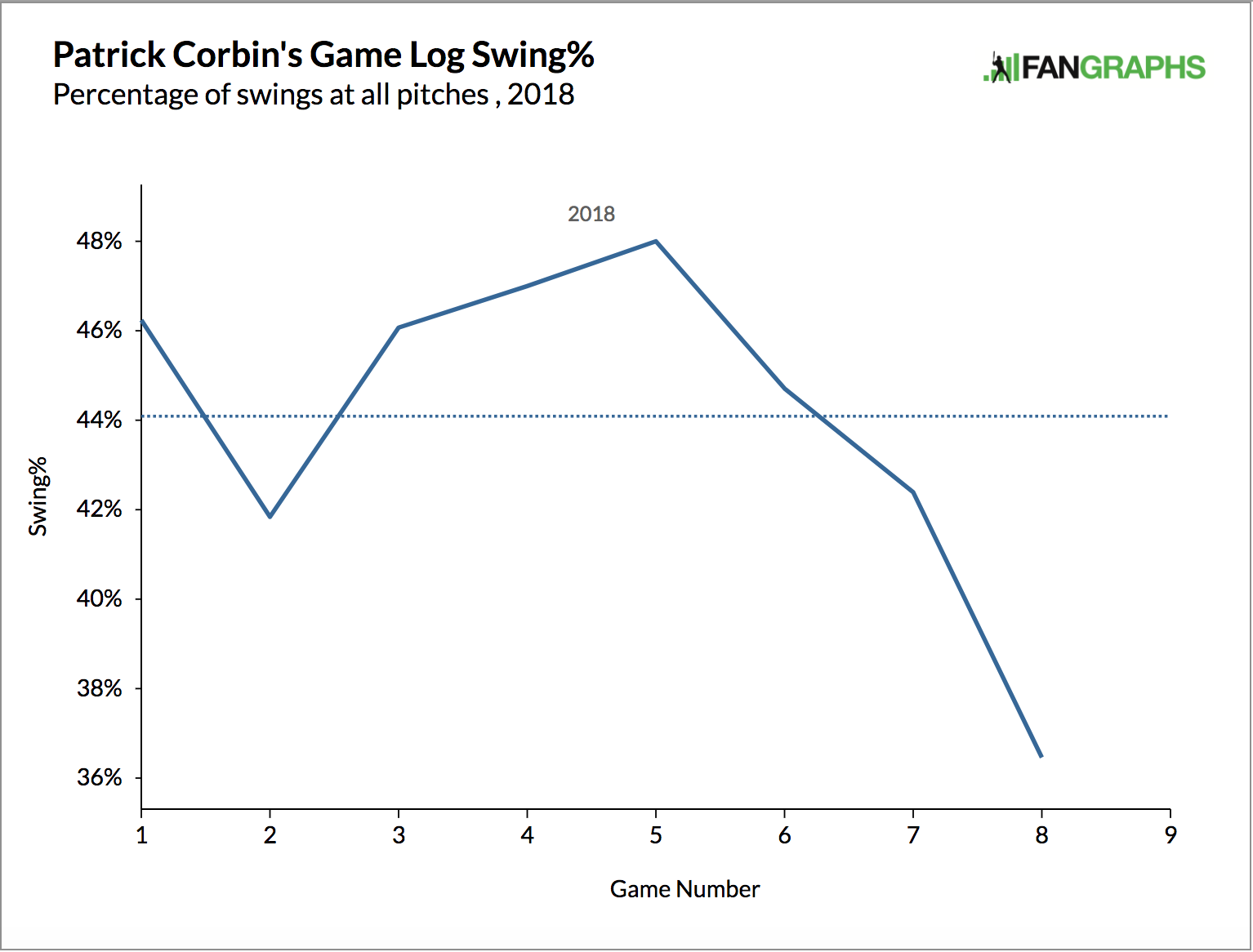 As a result, his slider whiff percentage is down nearly 16 percent from April to June, setting up a scenario where I fear if whatever is plaguing him isn’t corrected soon, Corbin’s strikeouts might revert back to preseason projections that pegged him below 8 K/9.

The Player Rater has Corbin as the 35th pitcher rest of season, which I feel appropriately balances the potential this velocity drop is corrected and the potential it takes a chunk out of an otherwise fantastic season. If you’re over exposed to Corbin among leagues I could see offloading some shares for the going rate. Pitchers are fickle beasts and Corbin might be the first victim of overexcitement in 2018 for reasons nobody saw coming.

After Bundy’s rocky start, I fully expected navigating to a rolling game log of his slider usage and FIP would suggest that once again, a decrease in usage of his best pitch was leading him astray. This was the my stance after Bundy’s strong start to the season: keep his slider usage up and good things will happen.

That, unfortunately, seems to be wrong. Bundy’s slider usage has remained stable around 26 percent for most of the year, even on a start-to-start basis, but a three-start stretch allowing 19 earned runs on nine home runs is not encouraging. He bounced back Sunday with a seven-inning, seven-strikeout battle with the Rays, but relinquished four walks in the process. Digging through peripherals underlying his starts prior to Sunday, I stumbled across some interesting, but not clear-cut release point differences. 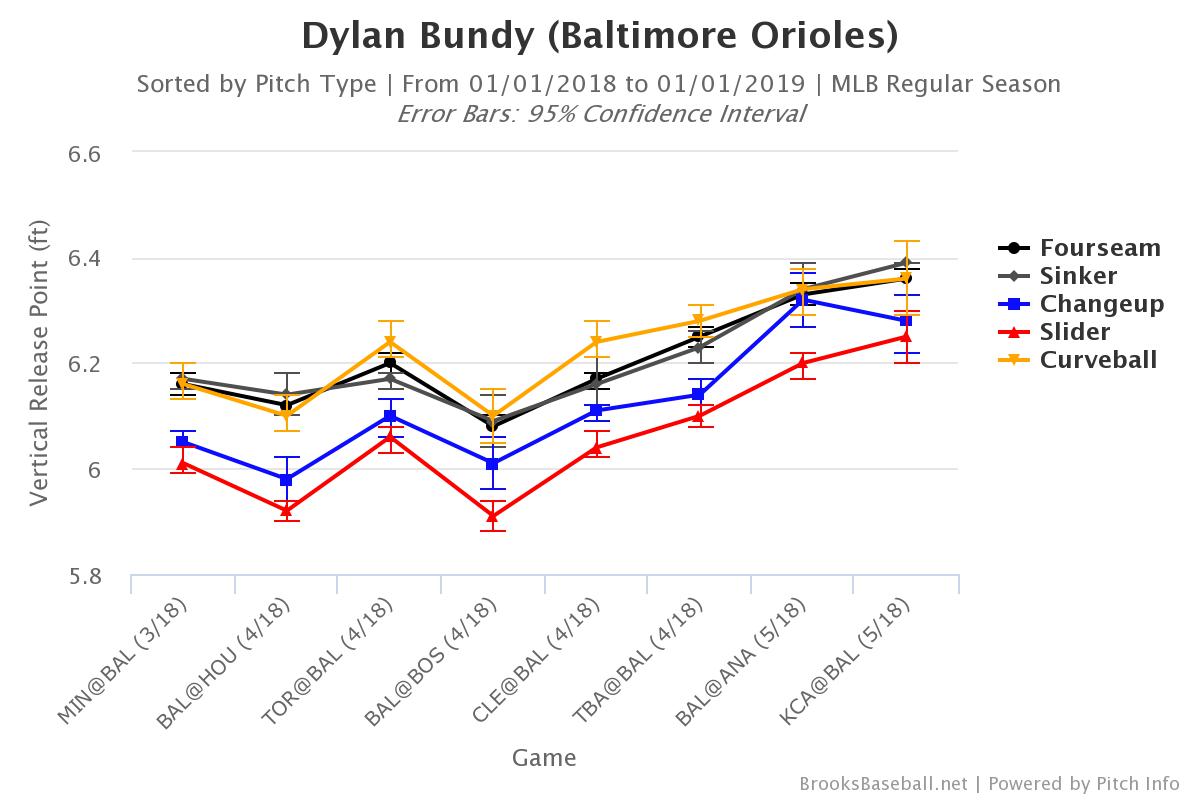 It seems as though Bundy’s mechanics could be slightly off, as his horizontal release point has tweaked itself as well, but not as dramatically. (Note: “[email protected] (4/18)” was the start of his horrid, three-start stretch.) The counter to my above theory is that release-point differences plus or minus .1 ft don’t often matter substantially, and given that the break on Bundy’s slider has been stable all season, his release point may not be affecting his success as much as I am speculating.

Unfortunately, his Sunday start has not been populated on BrooksBaseball to observe whether this data point fell back to his earlier outings, which would provide some validation to this very speculative theory and suggest at least some signal as opposed to noise.

The Player Rater has Bundy as interesting, but replaceable, ranked 59th overall behind names like Miles Mikolas and Danny Duffy. I had hope for better things after viewing his first few outings, but now it seems Bundy has adopted the stigma of a cyclical starter, stringing together great outings only to completely fall off shortly thereafter. As with all pitchers, there isn’t one component, even though I thought his slider could be a key, that would sprout success for the righty.

More to come next week!