I’ll be honest, I don’t like the term sophomore slump. As with most “catch-all” phrases, there are times where use can be misleading, likely because the definition is ambiguous. We know it occurs in the second year of a player’s career, characterized by noticeable decline after success, but that’s pretty much it. Does it matter how long the player was in the league during the preceding year? What if the player began to slightly decline in his “freshman” season and it carried over into the subsequent year? How about a scenario during a player’s second season where the consensus is the lack of production is luck based? Is that technically a sophomore slump or simply poor luck?

Struggles come after success because pitchers are smart; they adjust to their opposition with exceptional haste. The never-ending game of chess – aka, baseball – requires constant adjustment and by using the phrase “sophomore slump”, we omit the complexity of this adjustment for a simpler, verbal shrug of one’s shoulders.

Cody Bellinger warrants that shrug. But while some may cite the sophomore slump, the immensely more valuable alternative is to venture under the hood.

Let’s start with how Bellinger is being pitched… 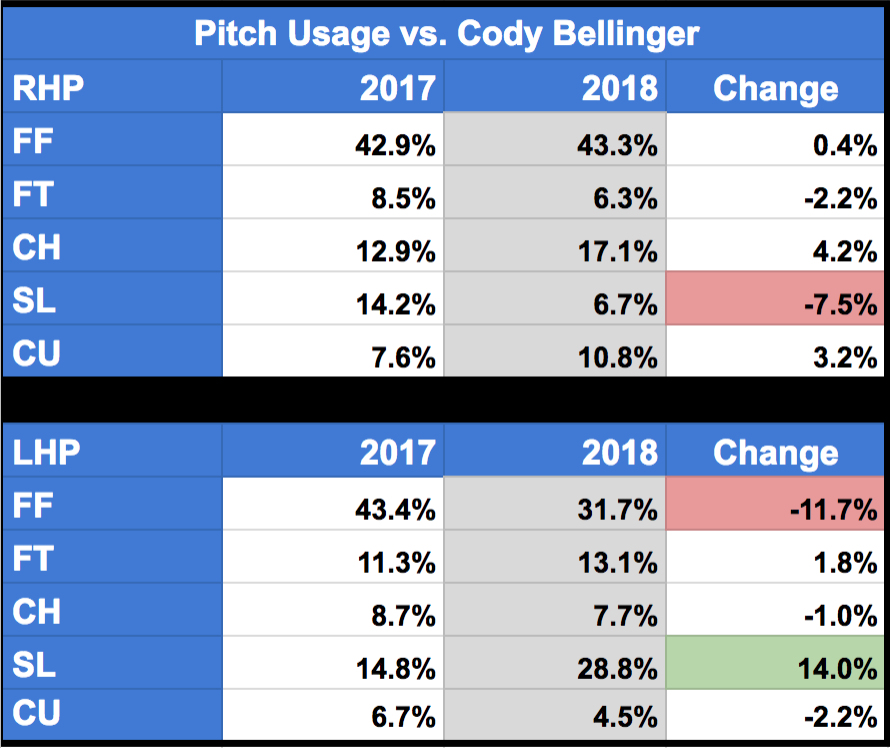 A clear shift has occurred in how left-handers are pitching Bellinger: less fastballs, more breaking balls. It’s a natural flip, given Bellinger’s ability to square up fastballs last season and the want for most pitchers to keep balls away from the big lefty.

Part of Bellinger’s success in 2017 came from his ability to hit left-handed pitching, something few lefties with max-effort, lofting swings are able to do with any success (especially for 132 games). While Bellinger was still stronger versus right-handed pitching last year, his wRC+ between each handedness was virtually even, and he was actually striking out more versus righties.

Flipping sides, right-handed pitchers haven’t shifted dramatically versus the Rookie of the Year winner, with slight changes from sliders to more changeups and curveballs, uneventful given the aggregate results off Bellinger’s bat have been equally as poor.

The natural progression after analyzing usage of pitches is the location of said pitches. This unearths the widening of a hole in Bellinger’s swing.

Perhaps better visualized using this graph from BrooksBaseball, the above shows the more precise shift in Bellinger’s hole and its growth. Even though in the aggregate Bellinger is seeing less fastballs, the fastballs he is seeing, from either handedness of pitcher, he is missing.

Is this a common issue? Absolutely. Numerous power hitters have holes in the upper-third of the strike zone. 2017 Aaron Judge was one of them. He has done a fabulous job of closing off this hole in 2018. Given the four-year age difference between Judge and Bellinger, I can’t say I’m surprised Judge has adjusted quicker than his West Coast counterpart has this season.

The simple suggestion would be to stop offering at pitches up, but baseball is unfortunately not that easy. I speculated last season that Judge’s issue with pitches in the upper-third of the zone might have been because of his shoulder ailments, which I still cannot confirm or deny, but seem to now at least be loosely correlated, given Judge’s health and offseason surgery. Could Bellinger be nursing an ailment? Speculating on injury is an art I never want to master given the lack of case-t0-case predictability; it’s a losing proposition. So the alternative is to suggest Bellinger changes elsewhere.

We might be able to accept Bellinger’s upper-third issue if we can hope for improvement elsewhere. His approach from last season to the fastballs he is able to hit was a productive, gap-to-gap approach. That has largely dissipated in the early stages of 2018.

This is tied to Bellinger’s increase in the total amount of balls he is hitting to his pull side, up about four percent overall and 10 percent versus right-handed pitchers specifically. Simple math suggests Bellinger’s pull-side tendencies must be down versus left-handed pitching, which we can confirm (~10 percent drop from 2017 to 2018). That leads us back to the encouraging case of Bellinger versus left-handed pitching. He seems to be consciously using the whole field, being more patient and laying off breaking balls, but the results haven’t manifested.

Like my Chris Archer column from last week, Bellinger is perplexing. To enhance the confusion, let’s toss in a swing change.

Bellinger has always had an upright stance, with a slide-step stride that is one of the main reasons many consider him a rotational, upper-body hitter (as especially explosive one). That hasn’t changed, but what has is the positioning of his bat. While the peak load of his upper body remains similar from the angles I’ve seen thus far, inverting his barrel towards his back shoulder as opposed to keeping it parallel, in theory, lengthens the time from barrel to load.

Seeing this led me towards some confirmation bias of Bellinger increasing his hole against fastballs in the upper-third of the zone. The minor increase in his amount of movement might be throwing his timing off for balls up, which are tough to get to with a longer swing or less-than-plus bat speed. But this application fails to confirm why he’s pulling the ball more versus right-handed pitchers, which suggests he’s getting around on pitches quicker than the previous realization that he’s having trouble with pitches up would suggest.

While I often love GIF’ing up adjustments and suggesting they’re the main reason for emerging success, in Bellinger’s case, I think reversion back to his parallel bat doesn’t fix his issue against high fastballs or his tendency to pull the ball against right-handed pitchers. Both those matters are workable issues he can fix with further mechanical adjustment or a conscious gap-to-gap approach (think early 2017 Kris Bryant for the latter). Rumors of a demotion to Triple-A are radically unnecessary, especially given Bellinger’s ability to play a viable centerfield and the fact that he’s been almost neutral offensively as opposed to holding a liability position like the Austin Barnes or Logan Forsythe.

The league adjusts back to hitters and we’re in the middle of exactly that for Cody Bellinger. Razzball’s Player Rater still views him as a top 75 player for the rest of the season, lower than where you drafted him, but not a player to completely dismiss. I view Bellinger as a plus-plus raw power bat with intriguing statistics against left-handed pitching and the need for further adjustment versus right-handers, both of which suggest my lean towards support of the big lefty.