Took part in another mock draft the other day.  This mock team didn’t mock up as well as my last 2010 fantasy baseball mock team.  I underestimated how low catchers would fall.  In the 12th round — a round and/or around where I usually like to start thinking of catchers in 12 team leagues — Montero was staring at me in my Beetlejuiced-sized head (that picture of me above the post is actual size) and I just couldn’t turn him down at the 154th pick overall.  But then Soto sat there for another 5 rounds.  If I would’ve known I could’ve took Soto with the 200th pick, I would’ve took a better 4th outfielder, a better 3rd baseman and a better corner infidel.  But it didn’t work out that way.  Such is life.  I still think my team is solid.  The draft was a Mixed league, 5×5, 4 outfielders, an MI, a CI and 9 pitchers, any combination.  (FYI, rankings will start again Tuesday morning.  I’m on birthday-long-weekend until tonight.)  Anyway, here’s a 2010 fantasy baseball mock team, some thoughts on certain players and where I drafted them: 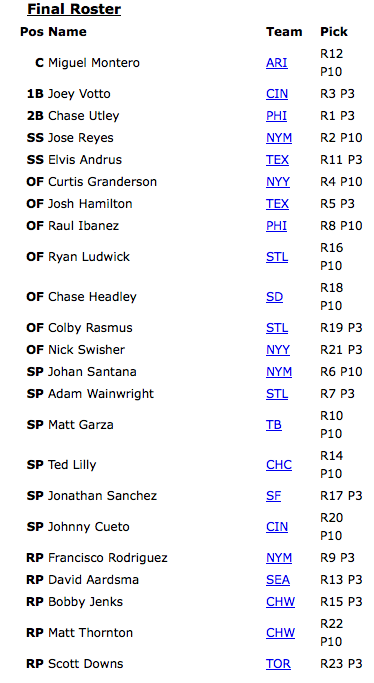 Round 2 – Jose Reyes – Usually when I draft speed of Reyes’s caliber, I ignore speed for the rest of the draft. I didn’t do that this time because I wanted to illustrate an employable strategy that might need its own post. When my crush of the moment, Ian Stewart, was drafted in the 8th round, I knew I was not getting a 3rd baseman. I had my Sleeper Pick For 3rd Base That No One Wants Including Myself in my back pocket, who I knew would be around because appropriately no one wants him.  But more on him in a second.  So to make up for my lack of a 3rd baseman, I drafted too heavy on speed.  I really don’t need Andrus and Reyes and the 10-20 steals I’m getting from others.  With extra speed, I’d be able to trade for someone.  Reyes for Zimmerman?  Andrus for Chipper?  Andrus for Beckham?  Reyes for Youkilis?  If I would’ve just took, say, Mark DeRosa at 3rd base when I took Andrus then I wouldn’t have a 3rd base or a shortstop to trade.  It’s obviously not an ideal strategy.  You should try and leave the draft with a team you want, not one you want to trade.  But it’s a strategy to keep in mind if your back’s against the wall.

Round 5 – Josh Hamilton – I didn’t believe the huge value coming out of 2008 and I don’t believe he’s washed up either.  In the 5th round, that’s solid value.  Plus, the great thing about Hamilton is if he starts the season hot, his value will soar because he’s the golden child.  Or is that the golden armed child?  Either way…

Round 6/7 – Johan Santana and Adam Wainwright – I’m sorry, but when I see Johan fall into the 70s in a draft, I’m taking him. The Wainwright pick was probably unnecessary, but I felt like my first five picks — Utley, Reyes, Votto, Grandy and Hamilton — are so stacked that I could’ve afforded the double starter pick.  I could conceivably have 5 top 10 overall picks from my first 7 rounds.

Round 8 – Raul Ibanez – Raul was not the best outfielder on the board when I took him.  He was the best threat for power and RBIs on the board.  I could’ve took Double I or Alfonso, but Torii’s less of a power threat and gives value with steals, which I didn’t want, and Soriano’s too risky for my team.

Round 9 – Francisco Rodriguez – Some ‘perts refuse to draft saves ever, to the point of absurdity.  K-Rod at the 111th pick overall is value.

Round 10 – Matt Garza – The one American League starter I drafted.  He K’d a decent amount in the minors but he didn’t show that until last year.  In 2010, he’ll continue to show it.

Round 16 – Ryan Ludwick – I don’t even particularly like Ludwick.  I think he can easily end up waiver wire fodder, but I was drafting heavy on power late and he was one of the few guys left.

Round 17/20 – Jonathan Sanchez and Johnny Cueto – 2nd mock draft in a row that I’ve taken both of them.  You might just see a sleeper post about each.

Round 18 – Chase Headley – Finally, my Sleeper Pick For 3rd Base That No One Wants Including Myself.  It’s not easy to get excited about a Padres hitter.  I realize this.  I almost wrote a sleeper post on Headley, but I couldn’t summon up the enthusiasm.  Headley had a good 2nd half last year.  Optimistic projections have him at a .300 average and 25 homers.  With Kouzmanoff, um, off to Oakland, Headley will get to play 3rd base, where he looks more comfortable on the field, which could help him at bat.  Okay, I’ve said enough about him.  After all, as I mentioned in the Reyes blurb, I drafted so I could trade for an adequate 3rd baseman.