We’re about a third of the way through the season, and I must say I’m a little surprised at how much movement there is in the standings on a daily basis in some of my leagues. I have a few teams that I thought were rolling right along that quickly hit the skids and dropped several places overnight, and a couple of others that I’d almost given up on but are now giving me renewed hope after a few solid days of hitting and pitching. Either way, it’s no time to give up even in deeper leagues where it may be more difficult to improve your team, so let’s move on to our weekly handful of players who NL-only, AL-only, and other deep leaguers may want to (or be forced to) consider.

Cal Raleigh. Normally, a 25-year old catcher who’s hitting .129 on the year wouldn’t get even a deep league mention, but I do remember the Prospector Formally Known as Ralph mentioning Raleigh as a player to keep an eye on a year or two ago. That alone gives him enough cred for us to at least give him a quick check-in. Turns out that suddenly he may be worth more than a quick check-in, as Raleigh has been getting playing time due to fellow Mariners backstop Tom Murphy being on the shelf with a bad shoulder. His batting average has been trending in the right direction lately, in fact, it’s already up to .167 since I started writing this on Wednesday. His ownership has risen with it, from 2 to 5% this week — and with Wednesday’s game he now has 6 7 homers on the season in 31 games. One thing that hasn’t changed in 2022 is the dearth of solid catching options, so even a few good games are enough to turn deep-league heads.

Eli Morgan. Morgan is listed as a starter on most websites, but hasn’t had a traditional start for the Guardians this year in a hybrid role (opener, bulk reliever, 8th inning setup guy). After a fairly shaky start to the season where he gave up one, two, and two runs in his first three appearances/seven innings, he’s been stellar. Overall, he’s got a 2.08 ERA/0.54 WHIP, with 32 Ks in 26 innings… I’ll be trying to grab him this weekend in my AL-only league where he’s still available, as I’m now intrigued to see how he’ll be used and if he can continue to fare this well. (Note: I wrote this before Morgan came into a rain-delayed game Wednesday and vultured a win from Shane Bieber with another excellent 1.2 innings/2 Ks, further cementing his role as a crucial and flexible piece of the Guardians bullpen).

Harold Ramirez. Ramirez has been a dull but reliable deep league choice in part-time duty for the Rays; at only 4% only in CBS leagues he may be hanging around your deep league waiver wire without you even realizing he’s there. His production isn’t a game-changer, but it might help those that are struggling to plug a lineup hole with a non-zero number of counting stats; Ramirez has just two homers and two steals but is hitting .285 with 17 runs scored and 16 RBI.

Jared Koenig. Koenig’s CBS ownership is up to 4% as he was added to the A’s rotation this week for a start against the Braves. If you’re pitching-starved in an AL-only or other really deep league like I am, you may have already given him a look-see. What you would have seen in his start Wednesday is 3 scoreless innings and a run allowed in the fourth, followed by Koenig hitting a wall in the fifth for a final line of 4 earned in 4 innings with 3 Ks and 2 walks. About two-thirds of Koenig’s pitches were curveballs and sliders, which isn’t surprising since he has a meh fastball (that topped out at 93.5 vs. the Braves) – this is a 28 year old rookie we’re talking about, not a young prospect shooting through the minors. We’ll see if he gets continued chances and can improve his results, though, as he’s certainly earned his shot with the big club in 2022 based on his triple A performance: 2.21 ERA/1.02 WHIP in 53 innings, with 61 Ks and just 15 walks.

Travis Swaggerty.  I’ll actually start Swaggerty’s blurb by mentioning another Pirates outfielder, Jack Suwinski, again – Suwinski may not be Barry Bonds in his prime, but he’s still just 4% owned in CBS leagues, which feels low for a guy who’s actually been hitting pretty well including 2 homers in his last 4 games. Swaggerty is the more prominent prospect, and should probably be owned in all deep leagues while we see what the future holds for him, but it doesn’t look like he’ll necessarily play every day. He hits the bigs with 831 minor league at bats under his belt, with a .259 average, .343 OBP, with 21 homers and 40 steals. The numbers don’t exactly pop off the page, but I think we’re all realizing that prospects have gotten harder than ever to evaluate of late given minor league baseball’s lost 2020, and Swaggerty also had to deal with a serious shoulder injury last year. He was having a really good, but not otherworldly, year in triple A, and I will say I was surprised to see that the Pirates recalled him while not necessarily planning to start him every day. With both Tucupita Marcano and Cal Mitchell (who’s had 2 homers over his last three games himself) hanging around, this is definitely one of those situations that you can and should completely avoid in standard leagues, but needs to be monitored in deeper leagues for anyone looking for help in their pretend outfield this summer and beyond.

Luis Garcia. This week’s Luis Garcia is the one that’s a relief pitcher for the Padres, and one that happens to be pitching very well of late. Taylor Rogers has earned a long leash closing this year, but it is worth noting that he’s shown some cracks in his armor of late, as well as mentioning that another Padres late-inning arm, Robert Suarez, is on the IL with knee inflammation. Garcia’s numbers are solid but not spectacular on the year, and he’s averaging about a strikeout per inning – but he hasn’t allowed a run since May 20th and appears to be locked in as the 8th inning/high leverage setup guy in San Diego.

Jon Berti. Berti is only owned in 8% of CBS leagues but he barely qualifies for this column; I can’t imagine there’s a deep NL-only league where he isn’t rostered at this point for his stolen base potential alone.  He has multi-position eligibility in most leagues and has started at 2B, 3B, SS, and OF this year, but let’s cut to the chase and point out the one thing worth pointing out about Berti, namely his 9 steals in 28 games. After very sporadic playing time early on followed by a stint on the Covid IL, I thought Berti might be off even the deep league radar for good. Injuries to other Marlins and his own solid play, however,  have kept him in the lineup on a fairly regular basis.  In addition to the steals, he’s been providing a plus average/OBP (.273/.398) and recently put together a little 6-game hitting streak, so he may be worth consideration in slightly less deep leagues for the time being.

13 team 5×5 dynasty pick up Michael Lorenzen? Lead the league in WHIP and ERA ….would drop Jimenez…think he is done as As closer?

I sure wouldn’t give Jimenez another high-leverage chance any time soon, but hard to predict the A’s… I thought since this winter they’d groom Puk to close. Sure, pick up Lorenzen, just be prepared for some uneven results – but if you have an ERA/WHIP cushion sounds like a good gamble. 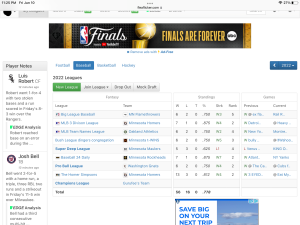 Love the column. Read it all the time!

ibh*, Jared Koenig was a new one for me