Eric Hosmer is in the first year of an 8-year contract. When the news broke back in February, the general consensus considered this a perplexing deal. It was an extended contract for a team that’s three-plus years away from competing. Hosmer will be 31 years old when games start to matter in San Diego, on the downswing of production if he tracks like most players leaving their 20’s.

I like to deviate from the pack. Part of it is for me to make sure I understand both sides of the argument before subscribing to one. The other part is simply my enjoyment of debate – I like disagreement. This lead me to consider whether backloading the deal actually made the signing significantly more tolerable over the long haul.

Hosmer is making $20 million through 2022 and only $13 million for the final three years of his contract. Going inside the mind of A.J. Preller, for this contract to make sense, he’d expect surplus value on Hosmer for the first few years. If dollar-per-WAR estimates say a 1-WAR player is worth around $8 million and Hosmer produces another 3- to 4-WAR season, he would be underpaid for his level of prouduction. Preller can rationalize the back half of the contract by saying Hosmer already produced enough to fulfill the cost incurred. Add in inflation and the likelihood that by the year 2025, a 1-WAR player might be worth around $12-13 million makes it easy to see how this contract isn’t terrible.

The issues with the above train of logic are apparent, which is why contract evaluation pre-mortem is complex.

Even if the surplus value is earned early in Hosmer’s career – when the Padres aren’t winning – then why does the surplus matter at all if it doesn’t carry into a window of time when the team is contending?

Hosmer has also been a consistently inconsistent player. This has tossed aside any idea of surplus value accumulating in the first year of Hosmer’s contract. Both fantasy owners and Preller have been underwhelmed. (Only one is paying $20 million, however.) 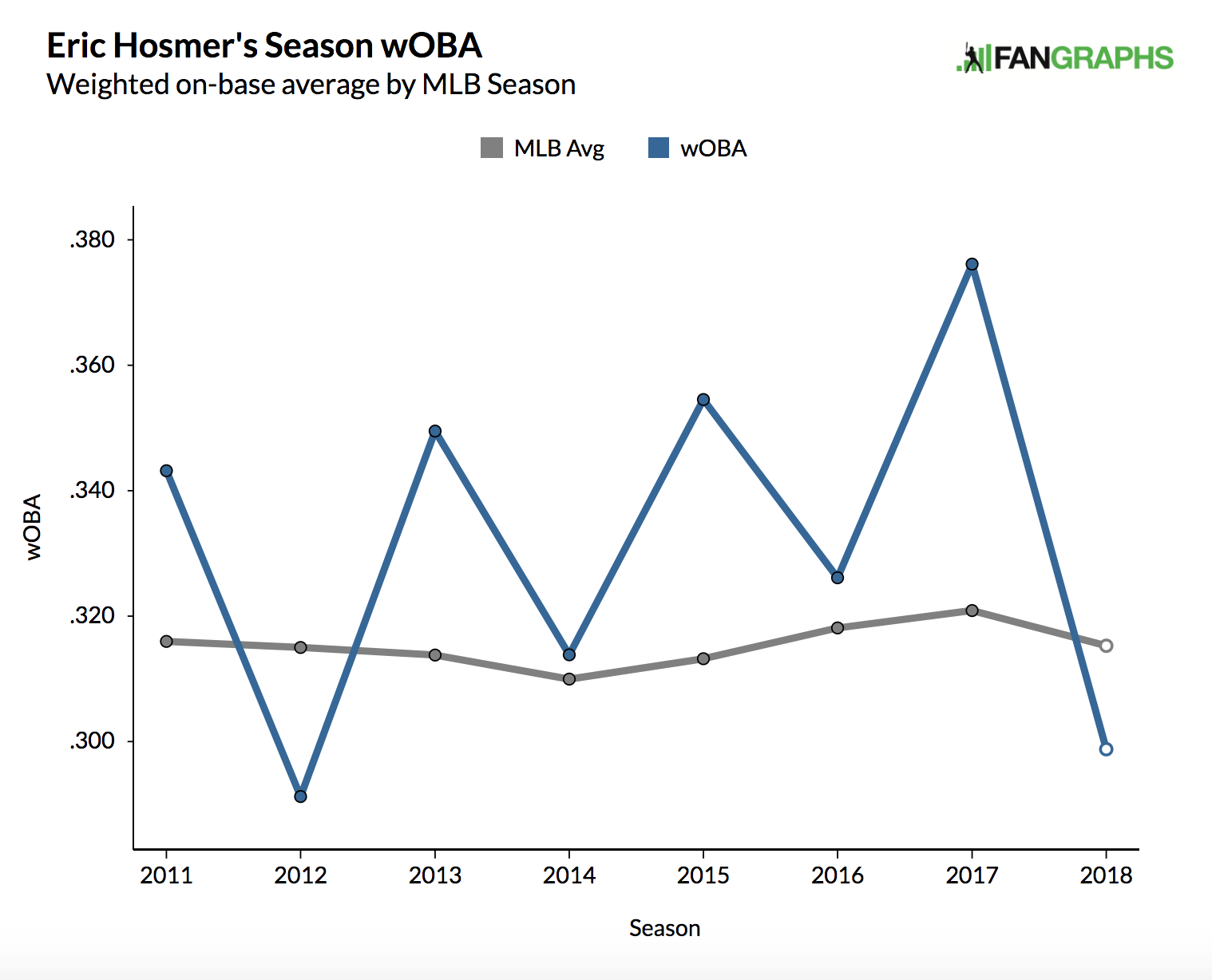 Hosmer has consistently been an above-average player for the prime of his career. Making a case for anything more flattering than above average is difficult given his season-to-season swings. It’s only fitting the biggest – and most concerning drop – has come in his first year of this Padres contract. Twenty-eight years old is right on the cusp of drop-off for most players. Hosmer has reminded everybody of that.

Most concerning about this reversion to mediocrity is the 7 percent jump in Hosmer’s strikeout rate. Now sitting at 23 percent, he is pacing to beat his career high by 3 percent, and his power hasn’t increased with the added whiffs to make them tolerable. As I showed with Amed Rosario last week, there are often ways to find where players are struggling. With Hosmer, a lot of his peripherals have only deviated slightly over his last four seasons. We’re not seeing massive changes in how often he is swinging, his discipline is relatively stable and this season Hosmer is actually hitting the ball harder than he ever has. On top of that, pitchers haven’t altered their mix against him, with the only increase a slow uptick in sliders over the last three years.

What stands out is common sense. Hosmer isn’t making the same kind of contact he has in the past. 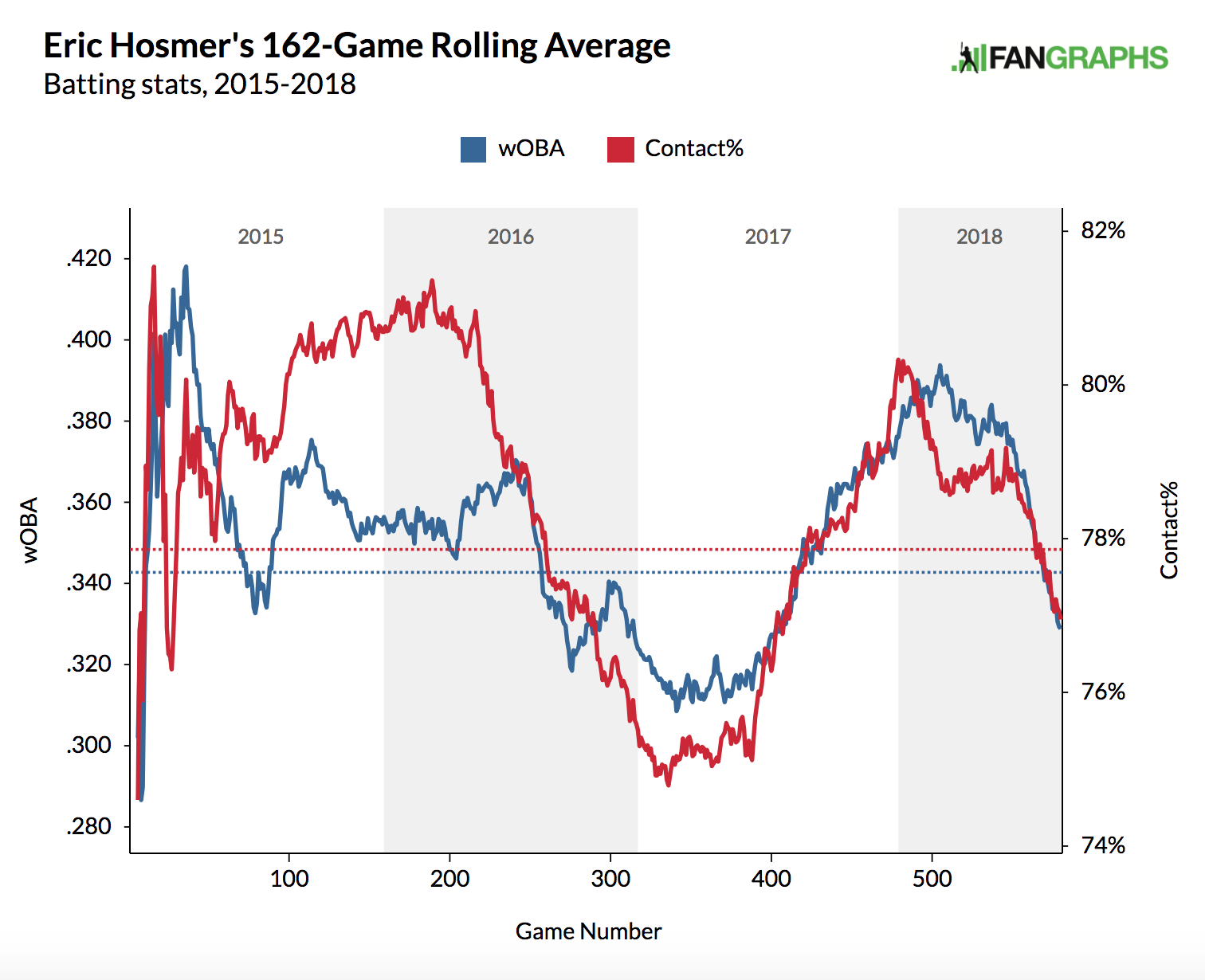 While quality of contact that Hosmer puts into play isn’t great (he’s been continually criticized for fly balls the other way), he’s still been productive with an inside-out approach in the past. Looking just at the fastballs Hosmer is missing, a pitch he has struggled mightily against this year doesn’t solve the question either. His hole against fastballs has crept inside slightly compared to the prior year. Hosmer is also missing more breaking balls in the lower third of the zone compared to last year, which explains slightly more of his struggle.

Why Hosmer is missing things he hasn’t in the past remains a mystery. I don’t see much in the way of a swing change after looking through tape from his torrid stretch at the end of last season and now. The lefty still employs a big leg kick with exceptional barrel control and a level swing that in the past has created groundball issues.

He could be nursing an injury, which might explain a very small chunk of his struggles on the inner third if his bat speed isn’t up to par. Unfortunately, I highly discourage injury speculation without really good evidence, and I don’t see enough of a difference in any part of Hosmer’s zone that makes me think pitchers are targeting an area with an inclination that he’s injured. They’re doing what they’ve always done and Hosmer has beat himself into the ground. (An example of good injury speculation is what happened to Aaron Judge last season.)

There are times where uncertainty in reasoning comes to the forefront and I’m left speechless. Eric Hosmer’s 2018 has taken the words out of my mouth. The components equaling struggle are right there in broad daylight, but finding the why for these issues has been difficult. Thankfully Hosmer has a large sample of at-bats to defer to. It’s not the prettiest of reasoning exercises, but the Hosmer we have seen more of in his eight years on a diamond is substantially better than the one we have at present. This is what projection systems are taking into account, and with the inability to provide an innovative perspective, it is what I will differ to as well.

Hosmer will probably figure it out because this struggle has been more of an anomaly than his prior success. (Yawn.)

Razzball’s Player Rater currently has Hosmer ranked 255th overall, 30th among first baseman, a far cry from his top-100 draft stock. Rest of season, we see a substantial amount of optimism as he ranks 114th overall and 17th at first base. Projections often suggest players with large samples that deviate wildly from the norm revert back. I would already expect low ADP on Hosmer compared to his projections. I would cautiously buy in a dynasty league and do so less aggressively in redraft leagues where all that matters is the rest of the season. Preller would probably do the same, if he had a fantasy team.