As the temperature rises each and every day as the start of summer approaches, the top prospects in baseball are beginning to make their mark in the majors. Three such rookies are pitcher Roansy Contreras and catchers Gabriel Moreno and Adley Rutschman.

Entering the season, Contreras was ranked as the 80th best prospect by Baseball America, 71st by MLB and 89th by Baseball Prospectus. The right-hander has actually been up all season with the Pittsburgh Pirates, appearing in eight games and making six starts. However, he is rostered in only 34% of Yahoo leagues and 10.5% of ESPN leagues.

Moreno, who is only 22, started the season as a top-10 prospect by Baseball America and MLB and in the top 25 by Baseball Prospectus. He appeared in his first game with the Blue Jays June 11 and collected a single that night and has collected at least one hit in four of his first five major league games. Yet he is rostered in only 27% of Yahoo leagues and 9.8% of ESPN leagues.

Rutschman is 24 and just made it to the majors with the Orioles. But he should have been with Baltimore last season as he proved he had nothing left to prove in the minors. That said, he is rostered in only 61% of Yahoo leagues and a surprisingly low 41.5% of ESPN leagues.

Let’s look at these three players and examine of they should be Top Fantasy Keepers or not.

In his first season in the Pirates system, he posted a 2.64 ERA and a 0.931 WHIP in 58 innings over 13 starts. Even more impressive was his 12.7 K/9 rate at Altoona and Indianapolis. Those numbers earned Contreras a brief cup of coffee with the Pirates in 2021 as he started one game, allowing three hits and a walk in three innings of work with four strikeouts. 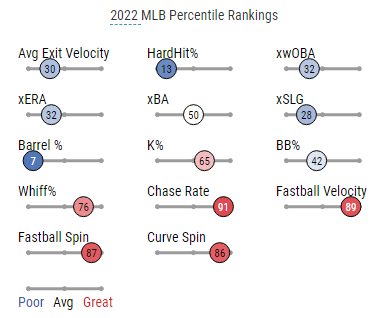 Since signing with the Yankees, Contreras has always been around the strike zone. The key to his rise to the majors so quickly is his increased velocity. Look at the charge above and you can see where his fastball velocity ranks among other MLB pitchers. The fastball now averages 96.4 mph and can touch 98 when needed and he mixes the pitch in with a very effective slider and curve as well as an occasional changeup.

If there is a drawback on Contreras, he is a bit undersized compared to most starting pitchers, checking in at only 6-feet tall and 175 pounds. He also missed a large chunk of the 2021 season with a forearm strain.

Looking back to 2016, the Blue Jays made one of the best signings of the year when they inked Moreno to a $25,000 deal. The native Venezuelan has since become one of the top catching prospects in the game, entering the season as the seventh-ranked prospect by both Baseball America and MLB and 22nd by Baseball Prospectus.

Moreno has a 60 grade when it comes to hitting thanks to a quick, compact swing. That swing allows him to make consistent contact and avoid strikeouts, as shown by his 11.9 strikeout percentage during his minor league career and 14.9% rate last season in AA and AAA ball.

However, Moreno is not just a contact hitter as he has above-average power with a 55 grade. He is also a very good athlete as he stole 18 bases in the minors and even saw time at third base in the Arizona Fall League while behind the plate he has an above-average arm.

If you don’t know about Rutschman, then you obviously are new to fantasy baseball or need a refresher course on him. A standout at Oregon State, the switch-hitting catcher won both the Dick Howser and Gold Spikes Awards as the best college baseball player in 2019 before being drafted at the top pick by the Orioles.

In his final season with the Beavers, Rutschman slashed .411/.575/.751 with 17 homers and 58 RBI in 57 games. He drew 76 walks in those 57 games and struck out only 38 times. That amazing eye at the plate has been consistent throughout his career as he walked more times than he struck out at Oregon State during his career and nearly averaged a 1:1 BB/K ratio in the minors.

This season at AAA he was slashing .304/.417/.507 with three home runs and 10 RBI in 20 games, forcing the Orioles to run out of reasons for keeping him in the minors and recalling him to the parent club.

Rutschman didn’t set the world on fire when first called up. On June 9 he was slashing .143/.226/.196 with only four walks and 15 strikeouts in 15 games played. Since then, however, he is showing the skills at the plate everyone expects of him. Over the last week, he is slashing .346/.414/.615 with only three strikeouts (all coming in the same game) and three walks.

When it comes to these three players, the verdicts are all easy: GRAB THEM IF YOU CAN.

I am seldom bullish when it comes to rookie pitchers because of the long learning curve many of them go through. However, Contreras is already showing signs of being a pitcher and not just a thrower on the mound.

While he has an above-average fastball, he hasn’t fallen in love with it. Instead, he is using his slider and curveball more and more. This season his fastball accounts for only 49.4% of his pitches while featuring the slider 29.5% and curveball 17.1% of the time with the changeup coming in at 4% of his pitches.

The Pirates are being careful with Contreras right now as he has yet to throw more than 5.2 innings in a game this season with a high of 98 pitches. He is only 22 and coming off the forearm strain last year, so it makes sense for Pittsburgh to be careful. That is no reason for you to skip over Contreras.

Let’s just put both Moreno and Rutschman together here. When it comes to fantasy baseball, a power hitting catcher who can also hit for average is the unicorn we are all looking for. Well, that is what Moreno and Rustschman are – the unicorns.

Moreno has to contend with Alejandro Kirk for time at catcher with the Blue Jays, but Moreno is the better catcher, allowing Kirk to get plenty of at-bats at designated hitter. Playing time should not be a concern for Moreno.

Playing time will be no problem for Rutschman. He was selected with the top pick in the 2019 draft for a reason – to play nearly every day. He hits from both sides of the plate, hits for average and power, and is a solid catcher.

If both of these players are sitting on the free agent market, grab them both immediately. One of them would make a great trade chip and in two starting catcher leagues, you just struck gold. And if you can get only one, you should still be ecstatic.

Thanks J. Great info for AR owner. Trade question for you. Dynasty league, 16 keepers.
My Jose Ramirez, Eloy Jimenez and Will Smith or Adley Rutschman
His Rafael Devers and Louis Robert.
His choice of catchers, obviously I get to keep one.
3 for 2 and age are part of appeal for me.
Thanks

Out of those two catchers, I’d keep Adley. He’s just special. 24 years old and a switch hitter with power.

Trading Ramirez takes guts. Speed, power and average. But Devers at age 25 is a great return.