I’m prolly the one hundred-millionth person to say this, but how are the San Fran Giants gonna have a prospect named Joey Bart and not Joey BART? Hey, Joey BART, do you have homeless people sleeping on your couch? If you don’t know what I mean, you’ve never been to San Fran. You’re better off, it’s an absolute slum. Los Angeles, where I am, and San Fran have a long-standing rivalry, which I don’t take lightly. I once drove eight hours to San Fran just to take a dump. I hate you, San Fran! I’m absolutely kidding. It’s a beautiful city, but as Mark Twain once said, the coldest winter I ever spent was a summer in San Fran. At least I think he said it; I’ve never googled it, but everyone in San Fran tells you that quote as some sort of badge of honor. Like being cold in July and August is good. What kind of city is cold in the summer months? Yo, San Fran, are you Australian? I think I see you in California, but you must be in Australia. Any hoo! (Wait, you want more San Fran bashing? Sorry, you need to go across the Bay Bridge for bashing.) Joey Bart is the future of the San Francisco Giants and why Buster Posey will be accumulating the league’s worst stats for a 1st baseman in the case Sooner v. Later. So, what can we expect from Joey Bart for 2020 fantasy baseball and what makes him a great dart throw?

Joey Bart appeared as a top 10 catcher for 2021 fantasy baseball, per Prospect Itch. Our very own P.I. added, “…” Well, let me just screenshot that shizz because it’s long and it’s worth the gander: 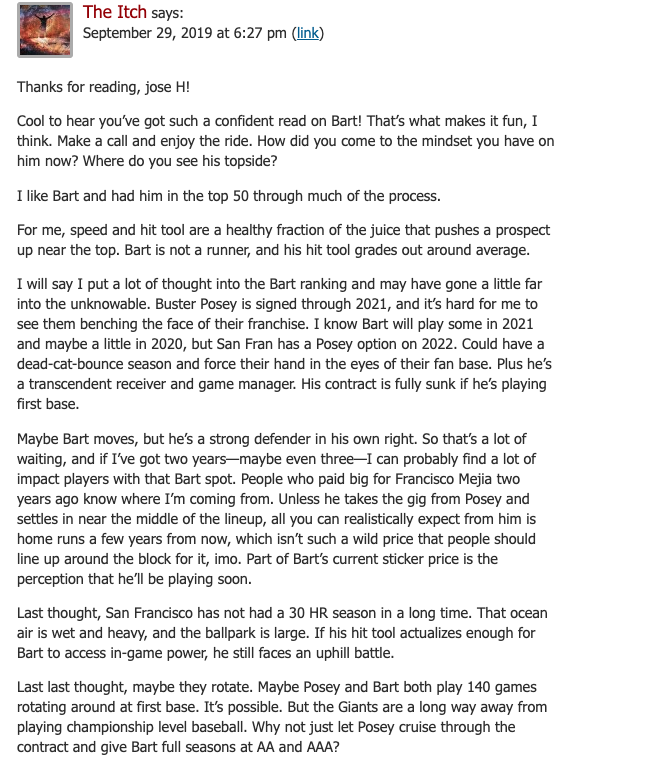 Hey, I’m down here! Guys! So, that’s the longest comment I’ve ever read outside of our frequent commenter, Baby Seal. Hey, there are seals in the San Fran Bay…Hmm, maybe it’s just a coincidence. I agree with Itch, while also differing slightly, and his comment was before The Rona, so maybe his thoughts have changed, if only slightly. While I do think Posey would make a rotten 1st baseman, I also think the Giants start terrible 1st basemen all the time. Honestly, they start terrible hitters at every position. Also, and this is legit conjecture, but what if the NL plays with a DH this year? The Giants will have the worse DH in the history of baseball, prolly, but maybe they give Joey Bart a roll and/or role. Finally, what if the rosters are expanded this year, due to Corona, and the Giants decide to keep Joey Bart on the team vs. letting him squander his talents with no minor league season? The Prospectonator (which gives projections for a 1,000 prospects) doesn’t fawn over Bart, giving him 17/6/.236 in a full season, but that feels pessimistic, and for a catcher I ain’t kicking that out of bed. These are all guesses and questions to ponder while limbo-sticking under the Rona, but right now we’re taking guesses with dart throws for our last round flyers. If the Giants play in Arizona with a DH or just keep Bart on their roster, he could be a top 12 catcher this year. Lots of unknown with him, but there’s lots of unknown as to what this season looks like. Joey Bart? Nope. Joey DART THROW!