I am still amazed that Toronto seems to have cracked the genetic code of baseball. How in the world have they managed to dedicate a third of their lineup to the children of former stars? Outside of fantasy baseball, this game has always been perplexing and gives us wonderful nuggets like this. The other wonderful thing about baseball is that it gives us fantasy baseball and there is a good chance that is why you are here.

Despite their major league talent, the boys of the north (trademark pending) will be spending the upcoming season in Buffalo or Dunedin or maybe Toronto. Who really knows? Regardless of where they call home, the Jays host several interesting fantasy assets. Two of the boys are going off the board in the fifth round but could not be more different yet intriguing at the same time.  Let us spend a little time digging into the 2021 fantasy baseball profiles for Vladdy Jr. and baby Biggio.

Vlad struggled out the gate in 2020 leading some folks to sour on his potential.  Through those first 28 games, he only hit .245 with 4 big flys and 10 runs batted in.  That included a July hitting only .172 out of the gate.  However, in the latter part of the season things picked up with .278 average and strong counting stats (22 R and 23 RBI).  Ultimately, it was a tough season but there was some promise for the 21-year-old.  If we look at his underlying contact measures, there is a lot to like.  No easier way than a simple call-out to Baseball Savant: 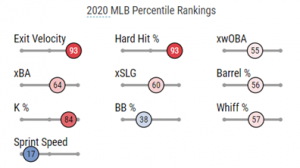 While those numbers are nice to look at, they are hiding something. His approach at the plate is preventing him from unlocking his potential:

While these are 2020 numbers, 2019 tells a similar story.  His power is great, but if Vlad continues to simply hit the ball on the ground instead of waiting for a pitch to drive in the air, the results will continue to disappoint.

Thanks to the wonders of 2020, Vlad will have 1B and 3B eligibility in some leagues. As highlighted above, he is young, hits the ball with authority and should be entertaining in the Blue Jays lineup. However, he will do no favors with the speed or average in 2021 without major adjustments in his approach. If there was one guy who needs to be a bit more patient and embrace the launch angle era, it would Vlad.

If we look at the speed numbers for Biggio across the past two years, he is 20 for 20 swiping bags.  At the same time, although he does not have the best exit velocity or hard-hit numbers, he makes up for it with a launch angle in the mid to upper teens.  He looks to have consistent and real 20/20 potential.

What I really like about Biggio is that he only shows one area of weakness in our 5×5 game and that is batting average.  With that category, there is an actual path for improvement and that is simply to start swinging the bat a little bit more.  Alternatively, there are some slight warning signs to watch as MLB changes the baseball in 2021.  Of his 8 home runs in 2020, only 1 was considered a no-doubter.  However, 2019 was an even 50/50 split giving me confidence that he will continue to put the ball over the wall on a consistent basis.

This is really a question of results versus potential but give me baby Biggio and let him fill out the stat sheet.  Maybe he continues to grow in his plate discipline and that leads to gains in batting average.  I doubt that happens in 2021, but the rest of the profile limits the floor, and he will continue to provide a level of positionally flexibility that will be valued throughout the season.  Add in a big boost for OBP leagues as well and Biggio wins this battle of the blue birds.

There is certainly going to be some love out there for Guerrero and he is immensely talented. However, we are still talking about a player that will mainly contribute to three categories in our fantasy game. On top of that, the corner infield lineups are littered with that type of hitter. Rather than grab Vladdy, how about getting Paul Goldschmidt or Anthony Rizzo 50 picks later. Heck, a guy like Trey Mancini could be a great value in the later rounds albeit with some health risks.  Vlad will be a fun player to watch but leave him for somebody else to own.

Biggio is a legit 5 tool player in OBP leagues and is underrated because most managers/ article writers focus on one thing- his low batting average.

At age 25, we haven’t seen his ceiling yet and he could progress in many categories.

Blue jays added Springer and Seimen which will only help a high obp player like Biggio score more runs – and if he bats in the middle of the lineup, Springer and Siemen will help his RBI total.

Huge boost in OBP leagues. While I focused on 5×5 here, the difference is so significant it had to be mentioned.

If I was to disagree with you for sake of argument, there would be two key areas to look. 1. Where does he fit in that lineup? He will play but will he be hitting at the top, middle or bottom. I would hate to see him losing opportunities at the bottom of the lineup but it is possible. 2. I will take the lower projections on HR and SB as I think he is the type of player that just gets the most out of his ability, I haven’t seen enough to convince me he is closer to 30/30 than 20/20.

Those two items are not really red flags and more of how high can he go? In OBP, I am investing a high pick and hoping for even more growth. Such a high floor as well!

i mean absolutely no mention of bichette?

Appreciate you stopping in for the read. Bichette gets the subtle nod at the beginning of the article, but Bo is a 2nd or 3rd round talent this year. Bringing him in for comparison is a landslide in my opinion. As we sit here today, he is the leader in the clubhouse for the sons of Toronto.

so in a dynasty league you are going bo over mr 80 hit tool Guerrero, also out of curiosity, how do you rank the fathers in terms of fantasy in their prime and over the career?

That is a really close one. I tend to value performance over potential myself and give a slight nod to Bo. I am just not convinced that Vlad will adjust enough even if he does have the higher ceiling. But that is much closer in dynasty.

For the fathers, Vlad Sr gets the easy nod for me over the other two. Bichette had a shorter but higher peak so I will take him over Biggio from a fantasy peak perspective. However, if we factor in longevity I would flip Dante and Craig.