Let the roasting begin!  By my calculations not one closer in the history of baseball, let alone the fantasy era, is worthy of induction to the Fantasy Baseball Hall of Fame.

…..Pausing to avoid the onslaught of flying rotten fruits and vegetables…..

I know, you mock only because you care.  Closers simply don’t bring enough to the table due to their limited number of innings pitched.  Consider the point totals of the top 25: 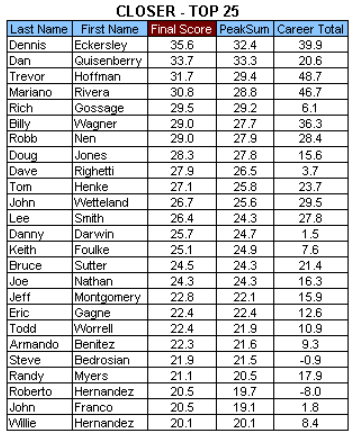 Those are ugly.  The batters get elected with 65 points, and the starting pitchers have to reach 52.  Not one closer has ever reach 36.  The #1 ranked closer, Dennis Eckersley, ranks just 212th among all positions.  The most impressive peak score belongs to Dan Quisenberry, but this is just 243rd best.  Quite simply, Closers only contribute significantly in a single category and therefore do not have a huge impact on a fantasy team since their low innings pitched totals hinder scoring in WHIP, ERA, Wins, and Strikeouts.

I previously argued that starting pitchers should be cut a break since they are not allowed to contribute in five categories since as saves reserved only for relievers.  I stand by this thought process, and argue the difference with closers is fundamental – they are allowed to contribute in all categories, but pitch too few innings to make an impact in all five.  It’s an argument between “incapable” and “not enough playing time”.

– Our own Razzball ‘perts routinely preach the practice of trading away the best closers.
– Most owners consider them a necessary evil.  You land A-Rod at a good price, or in the 1st round, and rejoice.  Or Peavy falls to round 2 and you feel your staff is well on its way.  But when you grab Joe Nathan in Round 3 all you can think about is scrounging around for 2 more decent closers to round out your relief corp.  Without 2 more good ones, you might as well have not drafted any.
– Punting a category is a fairly common practice where an owner decides to save money (or early draft picks) by avoiding high priced closers, and spending the savings elsewhere to create a powerhouse offense or starting rotation.  97% of the time, I looked it up, owners punt saves.  How critical can they be?

Finally, and I openly admit it may be a blind spot to this old greenhorn’s way of thinking, but real Fantasy Baseball is Rotisserie style and not this fly by night, get lucky one week and unlucky the next, head-to-head junk that is so damn popular nowadays.  (Can you hear my next line …When I was a kid we used to have to wait for the Sunday paper in order to get all of the weekly box scores from around the league so the commissioner could compile scores manually using an abacus.)  I say this because a closer’s value does change a bit depending upon league style, and one can truly take advantage of an extra $45 dollars in a roto-league, but less so in head-to-head versions.

Having said all this, in recognition that necessary evils are still necessary, Closers do have a place at the FBHOF, just one without plaques.  Some shine for the Top 5 all time:

1) Dennis Eckersley
In 1990 “Eck” posted an identical ERA and WHIP of 0.61, one of the more remarkable feats over the course of baseball history.  In 73 innings his K/BB ratio was a mind blowing 73:4 and one could argue it was the most dominant stretch of innings ever.  I got to thinking how rare it is to have identical ERA/WHIP scores and did some investigation.

Using 50 innings pitched as the barometer, only 7 pitchers have been able to record an ERA equal to or lower than their WHIP:

Bob Veale was lucky more than anything else.  Giving up 59 hits and 40 walks over the course of 78 or so innings is not exactly impressive as his 1.27 WHIP indicates.  We can safely assume Eckersley had a better season than him.  Up next are Earl Hamilton and Chris Hammond, both of whom are the same boat as Veale, though to a lesser extent.  A 1.11 WHIP is good of course, but not remarkable, and they too overshot their expected ERA’s.

This brings us to Dennys Reyes, Rob Murphy, and Nick Maddox who all kept their WHIP scores under 1.00, a mark of a great season.  The first item to note is Eckersley pitched in approximately 35% more innings than each of them and should be rewarded for his continued greatness over a larger body of work.  Second, you’ll notice Reyes, Murphy, and Maddox combined to record 1 save versus Eckersley’s 48.  I don’t have the means to calculate win expectancy tables, but I can safely say Eckersley also pitched in more difficult and stressful game situations, another mark in his favor.

Finally, and the most obvious, there is an ocean of difference between a 0.61 ERA/WHIP and a 0.83 WHIP/ERA.  Again using the 50 IP barometer, there have been two instances in baseball history where a pitcher recorded a WHIP under 0.65 (Eckersley’s done it twice of course).  In contrast, there has been a whopping 52 instances of 0.85 or better proving he’s in a class all unto himself.  I declare, as many before me done as well, that nobody has ever been as dominant as 1990 Dennis Eckersley.

2) Dan Quisenberry
Quiz holds the 3rd best single season FBHOF score among closers with 9.8 FBHOF points in 1983.  He’s also the only person to record two seasons of 8 or more points which gives him the best two year run in closer history (17.8 points between 82’ and 83).  His peak score is slightly better than Eckersley (33.3 to 32.4) but is ranked below him due to his relatively short career.  Eckersley benefits from his years as a starter and comes in with 15 total Fantasy Worthy seasons, a considerable 9 more than Quisenberry.  Even when narrowing down to only loser eligible seasons, Eck comes out on top 10 to 6 which pushes him into the overall lead in FBHOF points.

4) Mariano Rivera
Rivera is widely considered the best closer in baseball history so why does he ‘only’ rank 4th in fantasy history?  First, no one would really argue he was better than Eckersley when only looking at their best 5 years, but just as important, Rivera was not a dominant strike out pitcher like Hoffman who averaged an 11.2 K/9 ratio to Rivera’s 8.3; nor did Rivera pitch as many innings as the closers of the early 1980’s, only 57% of Quisenberry’s for instance.

Where does this leave the Eric Gagne’s and Joe Nathan’s of the world?  And why no Lee Smith or Robb Nen?

Gagne was awesome and no closer has recorded more points over a three year span, but that’s as far as his greatness lasted.  He was the best of the best from 2002 to 2004 but for the rest of his career has injured or merely average.

With just a four season body of work as a closer Nathan is out of the Top-5 for now, though that may change a the end of this year.  Robb Nen was elite for 1 year, very good in another, but not a true standout in his 3rd through 5th best seasons and thus falls just short.  Finally, Lee Smith is the epitome of the “compiler” label when used in a derogatory context.  His ERA and WHIP scores were routinely above 1.20 and 3.00 respectively, but if you want consistent saves (and only consistent saves) he was your man – ten seasons of 30+, though just 3 of 40+.