Quick personal fact: I’ve been writing about fantasy baseball online for seven years. And seven years ago, I had the idea to start saving ADP data to better study drafting.

Well, things that seem like good ideas at one point often get staler with time until they are forever abandoned. Such was the fate of my ADP data project… until now.

What’s changed is that I’ve found  a way to get historical ADP data potentially going all the way back to 2002, and not just for baseball but basketball, football, and hockey too.

How is this done?

I’ve been working on building a program that plays fantasy baseball, making extensive use of Yahoo’s fantasy sports API. Lo and behold, one of the sub-resources you can get data from is called “draft_analysis” and returns output that looks like the following: 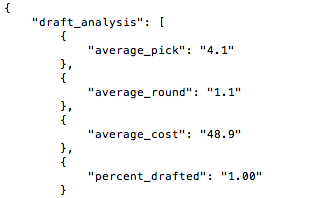 This data is this year’s draft analysis for Clayton Kershaw, who we can see was taken in the first round of drafts at pick 4.1 on average. In auctions he went for $48.9 and was selected in 100% of leagues. No surprises there.

Using this awesome Player ID Spreadsheet from Smart Fantasy Baseball to get every player’s Yahoo ID, I’ve pulled the ADP data from this year’s drafts for every player. For convenience I’ve also organized it all in an csv file and make it available for anyone to peruse and/or download.

A couple notes about the data:

To conclude, I’m happy to organize this data for the other seasons and sports, but know it will take a decent amount of time on my end. If you are interested in having the data or are thinking of a project to use it for, let me know! I’ll be that much more motivated to provide this info if other people show interest.

ADP data’s usefulness is weakened by it’s noisiness, but part of the reason for that is people generally only work with a couple seasons worth of ADP data. I will potentially be able to use over a decade’s worth, so my hope is there will be at least a few things we could learn from all that.

Look for more ADP data and an update on the robot project next week.