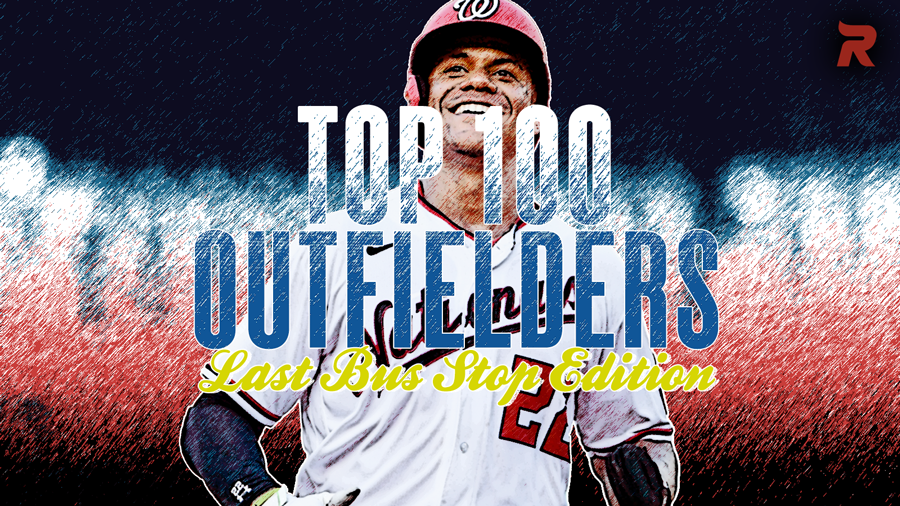 Yes Razzers, I’m back one more time to give a final rundown on the eve of the baseball season. There has been a flurry of last-minute moves and announcements this week and these all need to be accounted for. “Last bus stop” is not only because spring training is coming to a close but also because it’s the last school bus stop before prospects get sent down or announced that they will make the Opening Day roster. Let the kids play! Let’s go over a couple of major bits of news…

But first… I updated the board as a whole to reflect Yahoo/goofy league position qualifications since I had several comments about it last week. Franmil Reyes, Jared Walsh, Brandon Lowe, etc… All now appear on this list and have likely pushed a few off that were towards the bottom. Since the total outfielders have changed, I had to update the values for everyone, so don’t be alarmed! So now, we have them all. Enjoy!

Julio Rodriguez – He was announced as making the opening day roster for the Mariners. I have moved him up significantly, because why bring him on the roster if he’s not going to play? Rhetorical! Julio could offer you 25/15 (maybe only 10 depending on willingness to run) and a solid average. Definitely one of those can’t miss prospects. Likewise, this lowers Kyle Lewis down and off the primary list for now as he’s still gearing up and there are just too many mouths to feed in Seattle, enough that someone could lose sleep over it.

Jo Adell – I said this a couple days ago, Adell has been lighting the world on fire this spring, and the Angels decided now was the time. So long Justin Upton, hello Jo Adell and Brandon Marsh playing time. Both have been moved up, Adell the most at this time as I think Marsh will likely share more time with Taylor Ward. Adell though is primed for a huge breakout now, and I’m here for it. I took him last night around 170 overall in the Perts RCL draft as my OF3. Yes, that’s right (I know he’s a OF4 on the list but that’s the “risk”, in daily leagues you can afford to “get your guys”). Perry has already indicated that the departure of Upton clears the way for a lot of PT for Adell. LFG!

Josh Lowe – With the trade of Austin Meadows to Detroit, Josh Lowe now makes the roster and will see some playing time. How much? who knows. As of right now, I’m giving a slight uptick for Randy Arozarena and Manuel Margot due to PT, just depends on how much Cash decides to josh around.

Guys, yes, JUp hit 2 hr in ST then got DFA’d by the #Angels, but it’s not about him… it’s about Adell hitting 3 hr 3 sb and about having Marsh’s glove and LHB in the lineup more often.

It was right move last year to let Walsh takeover at 1B, and same now.

CWT is a breakdown of my tiering system for outfielders: is this guy an OF1, OF2 or etc? Anyone not listed is likely a OF5. CW$ is the dollar value to show the relative value of an outfielder to another (now with cents for sense). This again, is loose, I wouldn’t get too hung up on making sense of the cents as it’s meant to guide the tiers. The more important takeaway is the tiers. Do you want a deeper explanation? Go back and check out last week’s post here.

Once again, the individual ranks (and to a degree the dollars) don’t really matter, what’s important are the tiers :) Any outfielder not listed, consider them tier 5.

Hi Coolwhip, thanks for this piece! I’m in a points league where Ks are -1 points – trying to figure out how to round out my batters. At the end of my lineup, I have Kelenic and Kwan. Would you take Adell over either? Unsure whether Adell’s Ks will be a big hit to his value as compared to a guy like Kwan who doesn’t have any power but could put up steady counting stats while avoiding the Ks.

Sure thing! I’m really close to switching up the values of Kelenic/Adell. I think Adell has less Ks than Kelenic this year. And i think the ceiling for Adell is way higher than Kwan

Just drafted for my Keeper League!

I am perfectly happy with my team. I took a lot of RP pitchers but after I drafted pretty much my entire team and 8 starters I figured until things play out I’ll end up dropping one of them and streaming.

I also couldn’t revisit the Suzuki upside and I’ve never owned Cruz and he was available so late and I own him for OPS HR RBI and hitting near Soto.

Also, would you drop any deliver for any of these group of pitchers:

Would you snag Marsh off of the wire? And I forgot about Abrams, would you out in a claim and NA him until he’s ready? I’d obviously drop a RP for one of them.

I’d sit tight with that roster for now, and see how it shakes out. you got a strong start and even though you passed on an “ace” you have plenty of #2s so i think you are solid there.

Thanks for including those extra OF.

One immediate question. Are you weighting defensive flexibility in these ratings? e.g., surprised to see Varsho at top of the Tier 4 OFs.

absolutely, but likely you’ll see that Varsho is gone before that point if you are drafting him as an OF by the time you are looking for an OF4 he’s already been taken by someone as a C. And that’s the way it should be, just like players like Chris Taylor etc are more valuable as a 2B than OF… so he is likely gone for another position or you are using them to fill another position prior to their relative value as an OF

But if I’m looking at purely OF, then does Varsho really belong here? If so, I’m surprised.

I would have prefered a pure OF rating; and let me decide how much value to add for the flexibility. Maybe I’m biased since I’ve already drafted and hope to use your report for possible trades and pick-ups.

Thanks Coolwhip! Love CW$, now improved with the extra digit! But I’m still having difficulty buying into your tiers.

Presumably, if we were ignoring extra position eligibility (focusing just on these players as OF), your tiers are meant to suggest that one should not consider trading an OF in a higher tier for an OF in a lower tier.

But consider Ryan Mountcastle (#30, Tier 2, CW$3.50) and Julio Rodriguez (#31, Tier 3, CW$3.48). If I were to ignore Mountcastle’s 1B eligibility, I could see myself considering trading Mountcastle for Julio. And I think you could too, given how close the two players’ CW$ are. So I don’t really understand why you have them in two different tiers. I’d think it would make more sense if the two were in the same tier, whether both in Tier 2 or both in Tier 3.

Maybe I am missing something about your tiers?

The difference between Mountcastle and JRod is rookie risk, JRod though has a higher ceiling due to his speed. That’s the tier separation with him at least. Amed Rosario is more valuable as a MI than a OF, he’s kinda lackluster but safe, and Pollock was top 20 OF for stretches last year but with him, he’s always an injury risk so his value is tied to projected ABs. But if he’s healthy Pollock is a #3. Things like that… if a player is just a few cents off, yes, treat them as more or less equal. JRod is a #3 cus i’d feel a bit uneasy if he was my #2… but if you have a #1 and 3 #3s with JRod being 1 of them, then that’s a good risk cushion. Stanton, for example, probably should be a #2 but his numbers are so good when he is healthy he makes the cut (barely), but he’s your #1… there’s inherent risk with that.

Thanks for the detailed reply. I figured those were the reasons for the tiers. But then, ideally, those factors would get built into the CW$. So, I guess the answer to my question would be that the Tiers include information that are difficulty to quantify explicitly and, thus, excluded from the CW$ calculations Fair :)